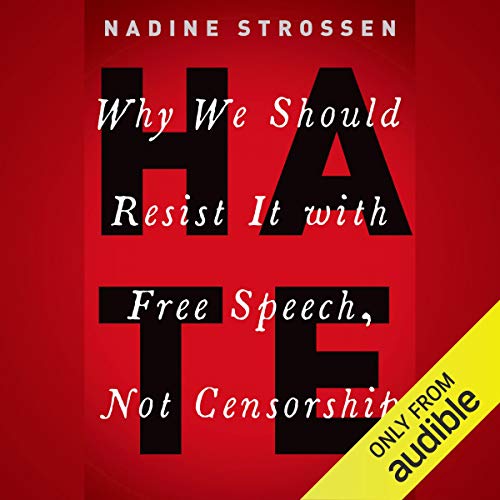 Why We Should Resist It with Free Speech, Not Censorship
Written by: Nadine Strossen
Narrated by: Nadine Strossen, Angelo Di Loreto
Length: 8 hrs and 17 mins
Categories: Politics & Social Sciences, Politics
5 out of 5 stars 5.0 (1 rating)

HATE dispels misunderstandings plaguing our perennial debates about "hate speech vs. free speech", showing that the First Amendment approach promotes free speech and democracy, equality, and societal harmony. We hear too many incorrect assertions that "hate speech" - which has no generally accepted definition - is either absolutely unprotected or absolutely protected from censorship. Rather, US law allows government to punish hateful or discriminatory speech in specific contexts when it directly causes imminent serious harm. Yet government may not punish such speech solely because its message is disfavored, disturbing, or vaguely feared to possibly contribute to some future harm. When US officials formerly wielded such broad censorship power, they suppressed dissident speech, including equal rights advocacy. Likewise, current politicians have attacked Black Lives Matter protests as "hate speech".

"Hate speech" censorship proponents stress the potential harms such speech might further: discrimination, violence, and psychic injuries. However, there has been little analysis of whether censorship effectively counters the feared injuries. Citing evidence from many countries, this book shows that "hate speech" laws are at best ineffective and at worst counterproductive. Their inevitably vague terms invest enforcing officials with broad discretion, and predictably, regular targets are minority views and speakers. Therefore, prominent social justice advocates in the United States and beyond maintain that the best way to resist hate and promote equality is not censorship but, rather, vigorous "counterspeech" and activism.

it's a great book

The writer makes good points about what to do and what not to do in today's hate and bigotry filled environment.

Amazing analysis of the topic

Really enjoyed and appreciated this book. I thought Nadine Strossen did a terrific job making the subject interesting and approachable.

Exactly what the title promises

Strossen digs right into recent calls to further restrict “hate speech,” but she doesn’t fall into the hole of mocking those who have proposed more restriction based on their interest in social justice goals. She explains the problems with hate speech laws in Europe and Canada, how they are often used against the people supposedly protected by the laws, the capricious nature of enforcement and the fundamental difficulty of wording.
She gives positive examples from college campuses that have found creative ways of handling bias incidents that don’t involve illegal and punitive speech codes.
I listened to the whole book and ended up buying a hard copy because I want to have the concepts and examples at my finger tips.

well thought out and written book

I found the content of the book to be great, it's well thought out, good examples and supporting data, but the narration felt almost condescending at times which distracted from the content.

How could a volume this thin and clearly written make such a complete and well-supported case for free speech? If you read only one book about addressing hate speech, this should be the one. It cannot receive enough praise.

Content is good but redundant. Narration is unnecessarily sensational to the point of
annoyance. Exaggerative emphasis of words and statements. Let the words speak for themselves.

I found this topic to be of extreme importance. The information and examples cited are truly eye-opening and provide a unique argument for promoting counter-speech in lieu of censorship. It thoroughly explains the reasons for this argument. I had to listen to the text on 1.25 speed because I found the narration to be too drawn out and slow. Additionally, the message became overly repetitive and could have been delivered in a more succinct form.

While I agree with the author that censorship doesn't reduce hate. The authors reason is a pragmatic look of which method has the less hate in a society. I think keeping the government out of legislating what people can think and discuss is proper because the governments role is to protect your freedom of thought and action as long as you aren't initiating force. So I think her argument was weak because it relied on the lack of effectiveness of censorship too much.

I like everything about this book. the subject of very important. the arguments presented. good example of a good book. more books like that!!!