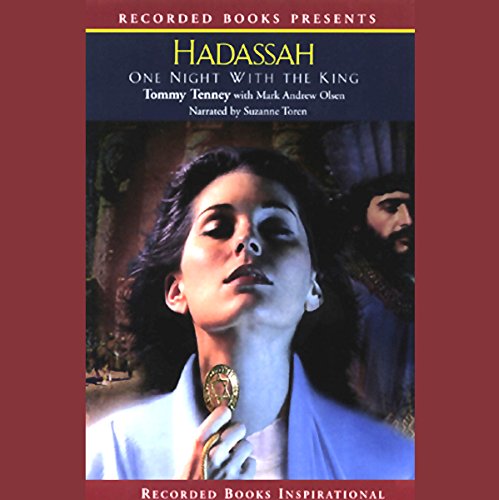 Best-selling author and inspirational speaker Tommy Tenney teams with Mark Andrew Olsen to deliver a mesmerizing tale of historical fiction. Favorably compared to Anita Diamant's The Red Tent for its unexpected plot twists, Hadassah is the fictional account of the Bible's Esther, the Jewish peasant girl who became queen of Persia.

"One night with the King changes everything." This is the message Esther, later known as Queen Hadassah, wrote circa 492 B.C. to one special candidate for new bride to King Xerxes. Now, in present day, another Hadassah, descendant of the bridal candidate, has been given these stories, passed down from generation to generation, of Esther's fateful time in history. It is a tale of persecution and benevolence, death and rebirth, and ultimately, an illustration of faith.

Tommy Tenney painstakingly researched the life of Esther to uncover the riveting details behind this woman's courageous ascent to the throne. Award-winning narrator Suzanne Toren immerses listeners in the captivating world of ancient Persia.

"Esther...is a fascinating character whose story lends itself well to a fictional retelling." (Publishers Weekly)

What listeners say about Hadassah

A Mistake for Me

This was the first historical fiction novel I have listened too and although it was probably wonderful for some, it dragged for me. As it is based on the life of Queen Esther, the story could not be changed much to add more intrigue, so I found that the author filled up the hours with tons....and I mean tons....of descriptions. Every pillar, every wall, every floor, every garment, every piece of jewelry and not once but over and over again. Granted the story picked up about half way through, but even "The night with the king" was anticlimactic (no pun intended).
The narrator was good match for this reading. She did a very good job.
I did learn more about the Story of Esther than I knew before, that is for sure. I guess that would be the saving grace for this book. I came out knowing more than when I went in.
The beginning of the book seemed to go on forever before anything good happened. We finally got into the meat of the plot after about 4-5 hours of listening. I can't tell you how many times I almost put this audio book away, but I decided to persevere just so I could say I read it. I can tell you, that had it been a book I was actually reading and not listening to, it would have made it back to my shelf long before chapter 10 (I think there is something like 46 or so chapters).
I've read mostly glowing reviews about this book, unfortunately I can't join in with that same sentiment.

I was surprised by how much I liked this audiobook. I even listened to it a couple of times.

The book was written with a "Christian" audience in mind, the authors are not well know, and reviews on Amazon.com were mixed so I didn't expect greatness. However, the book works as a historical novel.

I liked the characters and the action kept moving. The narration was excellent; it was very easy to listen too and helped to keep the story moving along.

I enjoyed listening to this story and I learned a bit about Queen Esther. I would definitely recommend this audiobook. If you liked this, try any Tracy Chevalier book, Orson Scott Card's Women of Genesis series (Sarah, Rebekhah), and "The Red Tent".

I was so moved by this story. The book of Esther came alive. I could hardly stop listening.

This is a great work of spiritial fiction. Many of the information closely compares to the Bible, but is told in a way that will interest you in the historical times. Spiritually motivating and reminds you of the stories told to you in Sunday school. Great narriator too!

What a joy! The book was well written and had the perfect narrator. It was a combination of romance and History. It was a tale I did not want to end. It brought the past and present together nicely.

This book was captivating and enlightening of Biblical history. Enjoyable with romance and mystery combining to be so intriguing that I didn't want to stop reading!

a creative take on an old story

...with a magnitude of salient instructions to brides regarding how to love even very difficult husbands.

I really enjoyed this imagining of Queen Esther's story. It completely followed the Biblical version and also completely filled in all the plot holes. I always like Biblical historical fiction because it causes me to think about the story in new ways and to learn new things. It also humanizes Biblical people and reminds me that people are people no matter the time, place, or age. I have not checked the facts but the book seems to be well researched and contains a good deal of contextual history. I marked the performance 4 stars because the different voices are a bit distracting until one gets used to them. Overall, it was fabulous!

This was an amazing book.

I enjoyed this book so much. It was an amazing book with an amazing narrator.

Finally! A book that really tells us girls how much our "Daddy" (Daddy = God) loves us! Thank you Tommy Tenney for being God's voice! We all need to know God's heart and how He longs to love us and this book tells us that truth.

I didn’t like it found it slow confusing and boring . I managed to the middle of chapter 2 and couldn’t be bothered to go any further . I did however get a different insight into the story of Esther perhaps it will change if I ever get to finish the book