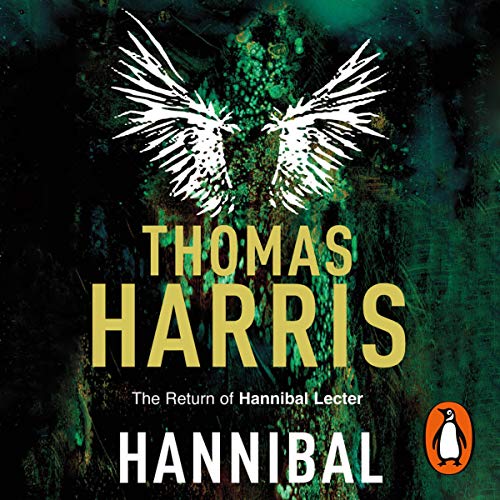 'It is an axiom of behavioural science that vampires are territorial while cannibals range widely.'

Hannibal killed nine people before he was caught. And five on his escape. Two of his victims survived - one of them is in an asylum; but the other craves revenge.

Mason Verger, a paraplegic confined to a respirator since his encounter with Dr Lecter, can move only the fingers of his crippled right hand across the soft blanket that covers his lifeless body. But Verger is very rich and very influential, and his reach extends into the echelons of power around the world.

His need to find Lecter is insatiable. In Clarice Starling he has the perfect bait. As gripping and terrifying as any reader or listener of Silence of the Lambs would expect. Simply unforgettable.

What listeners say about Hannibal

I have read and enjoyed this book. I was so looking forward to enjoying the Audible version on my runs but I am not sure if I can finish it. The narrators accent is so jarring, it distracts me from the story. This has never bothered me about an audio book before and I really didn't think it would make that much difference but it makes listening so much hard work! Please let me know if there is another version.

How can you go wrong with Hannibal Lector?

Yes I would. It is not only well written, but it translates well into an audio book

that it was unabridged

EXCEPTIONALY WELL READ- A PLEASURE TO LISTEN TO.

ONE OF THE BEST STORIES I CAN REMEMBER, ONE ACTUALLY SIDES WITH A CANNIBAL, MURDERER- IN CONTRAST TO A DECENT UPBRINGING.

What other book might you compare Hannibal to and why?

THE COUNT OF MONTE CHRISTO- BECAUSE OF THE VENGENCE THE PERSON WRONGED GETS.

Have you listened to any of Daniel Gerroll’s other performances before? How does this one compare?

NO NONE, HOWVER THE PERON WHO READS THE TRILOGY
THE HUNGER GAMES, ETC., IS ENOUGH TO PUT ONE OFF BUYING AN AUDIBLE BOOK FOREVER-ABSOLUTELY USELESS- MAYBE THAT MADE DANIEL CARROL EVEN BETTER.

Who was the most memorable character of Hannibal and why?

CLARISA - SHE GETS CURED ( PEACE OF MIND )FROM DR. HANNIBAL AND VICE VERSA

The best book of the series

I would definitely listen to this book again. I have read it once in printed form and will likely listen to the audiobook again in the medium term. I believe it to be if not the best, the most interesting book from the Thomas Harris series.

The characters - with the exception of Clarice Starling almost every character in the book is despicable. They are a very colourful bunch of people to say the least.

What does Daniel Gerroll bring to the story that you wouldn’t experience if you just read the book?

He is a wonderful narrator, his narration of the faceless, lipless and severly crippled Mason Verger was exactly what I would have imagined from the printed version.

If you could rename Hannibal, what would you call it?

Love the ending.. which flies in the face of popular opinion. A great and unexpected ending to a wonderful series of stories.

I enjoyed this book and I also enjoyed the ending, which many fans did not. It did get changed for the film so people who have seen that first may be a little bit shocked by how differently the novel goes. I think the writing is excellent, the character of Dr. Lecter is as brilliant as ever and I would always give Thomas Harris books a try.

The narration was generally good although much of the time I struggled to understand what Mason Verger was saying. That is true to the story as Verger finds it hard to speak due to some medical problems, but I think for the sake of clarity it should have been toned down a bit in the reading.

Enjoyed this, struggled with some of the narration

Really good book, enjoyed the story. Most of the narration is excellent. However I couldn't understand what Mason Verger was saying and found this very offputting. The rest of the book was good enough to make me stick with it, but it was a bit of a shame.

Controversial sequel to The Silence of the Lambs

Where as Red Dragon and The Silence of the Lambs were police procedurals with slight horror movie overtones here Harris writes a straight up gothic horror with slight police procedural overtones. What was hinted at as merely sub-text in the previous book - i.e. the chemistry between the Lecter and Starling characters - here becomes one of the main driving forces of the plot. Harris' meticulous research, characterisation and plotting are as good as ever - this is a very entertaining story - however at nearly double the length of the previous novels it is a little over written and bloated.
The narrator Daniel Gerroll I can only assume has never seen the film versions as he makes no attempt to sound anything like how the characters have previously been established. In deed his portrayal of Mason Verger is particularly one-note and frustrating to listen to in contrast to Gary Oldman's exquisite interpretation.
There are some great moments in the novel. The scenes with the pigs and the whole brain eating dinner party and resolution to the plot does have and almost blackly comic feel and I did stick with it right to the end.

Love Thomas Harris. And this is worthy of his few novels, but have to say this audiobook is spoiled somewhat by one of the characters performances.. Anybody who knows the story will know the character in question (Mason Verger) where the performance demands a verbal affliction.. He also happens to be a major character. The performance is so affected it's hard to understand! It's too much! Otherwise, a. Good listen albeit with a bizarre ending.

can't understand some of the narration !

can't understand some of the accents the narrator is putting on its soo annoying ad i lost track of what was happening! its prob a great story bit I had to turn it off ad i was getting so frustrated.

great story! not sure of the narrator though

Fantastic story! The narrator isn't always convincing, however, and Verger is very hard to understand at times

Just couldn’t abide the narration on this particular audiobook and had to abandon it. Don’t think the narrator will be getting many more gigs doing this. Poor.

Excellent end to the trilogy, very good narration, except some of the speech from Mason. Which at times was very difficult to understand.
Overall a very good performance.

I love the character. Red Dragon is a perfect example of the genre. Silence of the Lambs has maybe a slightly less interesting protagonist. Hannibal borders of self indulgent, particularly the scenes in Florence. As Harris says about the Doctor, "he won't deny himself". It's almost as if Harris is talking about himself instead. It does peak when all the major players are in orbit, but that ending...I can't decide if it horrified me because it was meant to or because it's awful. Left a bad taste in the mouth at any rate. The narrator commits to Mason but given the medium it's actually hard at times to follow, and his Barney is, well, odd. And to be honest this reading of Hannibal is a little too Anthony Hopkins for my liking.

If you can get past Florence, it picks up but be prepared for the finale. The TV show does it far better.

After the horror of the new book I had to see if I had imagined that this was better and there is no doubt this is a far superior book with excellent plot and characters that move and live or die with a realism that makes you care.
Second read reminded me of much I had forgotten and I enjoyed it without the influence of film.

Great Book, One Chapter Out of Order

Great book, excellent reading, but one chapter was read in the wrong order, which would have been confusing to anyone who didn't know the story

As usual, these tales wont let you down. Crime, Drama, eating people - its all very thrilling stuff and something you don't want to miss out on.

While I enjoyed the previous novels, the story is slow at times and the narrator is externally hard to understand when he portrays the character Mason.

A chapter is also out of sync which didn’t help with the confusion.

Such a shame to end the series this way

Have another go Thomas. This ain't it.

Reader did well for the most part. Barney and Mason voices were war crimes tho.

Almost couldn’t finish because of the readers Mason voice. So bad, so hard to understand and so no necessary

really good storyline I enjoyed it more than the m

Last of the Hannibal books in chronological order

The end to the Hannibal series with an odd finish. Took a while to get used to this narrator who was no comparison to Thomas Harris narrating in one of the previous books.
Kept me interested to the end.

Such a great read, though dare I say it, I preferred the movie's ending.