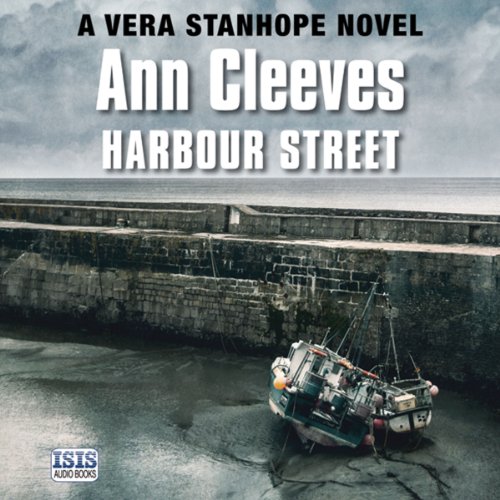 As the snow falls thickly, Detective Joe Ashworth and his daughter, Jessie, are swept along in the crowd onto the Metro. But when the train is stopped, Jessie notices that an old lady hasn’t left the train: Margaret Krukowski has been fatally stabbed as she sat on the crowded train.

Arriving at the scene, DI Vera Stanhope is relieved to have an excuse to escape the festivities. Soon Vera and Joe are on their way to the south Northumberland town of Mardle, where Margaret lived. Then a second woman is murdered. Retracing Margaret’s final steps, Vera finds herself searching deep into the hidden past of this seemingly innocent neighbourhood. Why are the residents of Harbour Street so reluctant to speak?

What listeners say about Harbour Street

Am loving these wonderful stories by Ann, well thought of plot, kept me interested throughout

There are many twists and turns in the plot.

What does Janine Birkett bring to the story that you wouldn’t experience if you just read the book?

I would happily have listened to the entire book in one sitting if it had been possible.

This book was a great combination of Ann Cleeves writing and Janine Birkett's reading.

I really like Vera Stanhope as a hero in these books she is a totally believable flawed human and it makes for a great story. I had issues with the narrator on this book. She had a nice voice but t the accents were very poorly done which spoiled it for me. Shame.

A detective that does not spend all day arguing with superiors. I sometime wonder how they actually get any work done. A detective that is not and does not seem to have ever been an alcoholic . She does enjoy her food and drink but that story line is not continually harked upon. No Vera gets on with the job in hand, is pleasant to her staff and is aware of her failings. All in all a great story,I am off now to listen to another,

Good story but not the best.

I'd previously listened to 2 other Vera stories both narrated by Charlie Hardwicke who was excellent. With this story however the narrator was different and the narration was done in a very sing song style. It reminded me of when I was a small child and would listen daily with my mum to the radio's "listen with mother" I'm a grown up and it seemed quite condescending and felt like the early days of TV's play school. Having said that I did get into the story and eventually got used to the narrator.

I like the Vera Stanhope books. This is a descent story, if a little slower than previous books, and not one of the best but still worth a listen.

Excellent! Hooked from start to finish

I'm a fairly recent convert to Ann Cleeves, initially through television, and had only listened to The Glass Room in audio so far. This was even better.

Yes, there are the odd convenient coincidences, but it is, as Vera would say, 'a story'. It works.

It has distinctive characters, really strong evocative writing, and enough twists and turns to keep you hooked, and guessing, to the rather bitter end.

The narration was excellent, it all comes to life as you listen. There was only one false step the whole way - Holly, the young female detective on the team, is described early on as having an 'educated southern accent'. Then she opens her mouth and out comes a flat estuary voice with a slight, bizarre, Aussie overtone at times. Perhaps Geordies find it as hard to do other regional voices as most of us find it to attempt Geordie!

I'd definitely recommend this one. Vera Stanhope may be odd, but she's addictive.

Enjoyed this Audible in conjunction with the book

This is the second Vera Stanhope story I have listened to, and found it good to have the e.book too for times when it was more convenient to read rather than listen. It was a tale that meandered a bit, but the characters were all well crafted and the ending was a surprise to me. I am working through the series of books and those Audible titles which are available. So far Charlie Hardwick has been my favourite narrator. The character of Vera is one who has grown on me and the interactions between herself and those in her team are as much a part of the enjoyment as is the plot.

What other book might you compare Harbour Street to, and why?

So very well narrated...one of my best audiobook experiences. The narrator brought the characters in what was a great story to life

Not as gripping as some other Stanhope novels

I enjoyed it but the English accent of one of the female detectives was excrutiating - more Australian, than cockney. Generally, none of the accents were as well voiced as in previous books which is normally one of the joys of this series. A good story but a bit thinner than the others that I have read.

well narrated. characters are well developed and keeps you guessing right up to the end. I really like the Vera stories I think Charlie Hardwick narrates marginally better but really liked this

I love Vera and hearing her thoughts. I like her relationship with her Joe Ashworth and her other detectives. I felt that the end of the story, on this one, was a little weak.

I like hearing the thought processes of the actors.

I felt that the narrator was good when taking on the role of Vera, weaker with the other characters.
I enjoy Ann's books, I love the way that they have come to our TV screen. I look forward to more!

Saw it coming and the forgot

The story is original, one could sense who might be responsible but then we are steared away and return with a surprise as to whodunnit

Less mention of the eventual culprit would have made sense

What does Janine Birkett bring to the story that you wouldn’t experience if you had only read the book?

Driving in the car would have been hazardous whilst reading this book, or any other. Her narration was excellent.

Was Harbour Street worth the listening time?

Would you listen to Harbour Street again? Why?

No. The reading was somewhat disappointing.

Vera because she is so acerbic .

Did Janine Birkett do a good job differentiating each of the characters? How?

This was disappointing. Joe sounded like an elderly grisly bear, but Holly's accent crossed between London cockney, South African and Australian. We found this very distracting and in the end irritating, hoping that Holly would not appear in the story too much. The Northern accents were fine.

Clever build up of suspense, slow simmering tension. Well drawn characters. Inspector Vera Stanhope is one of the best crime solvers of today.