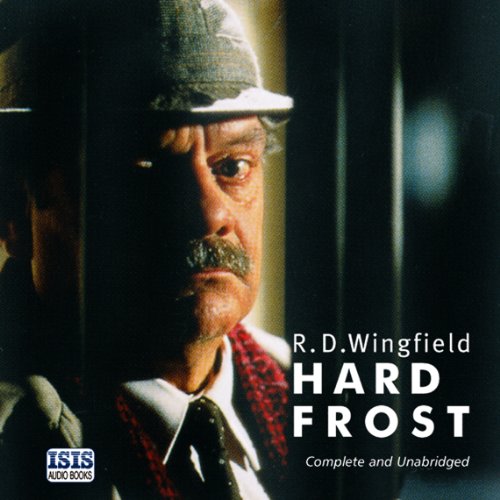 Detective Inspector Jack Frost knelt down beside the tiny body. Who did this to you, sonny? he asked, his face tight with compassion. The boy was eight years old, bound and gagged, and stripped naked. He had been dead for some seven or eight hours.

Frost should have been on holiday, he had sneaked back into the station late at night to help himself to some of Divisional Commander Mullett's cigarettes and this case had been dumped on him as no other officers were available. And then another boy is reported missing. The following day, the ransom demand: £250,000 or the boy dies like the first.

Coarse and insubordinate, fearless and intuitive, D.I. Jack Frost stumbles from crisis to crisis as he tries to cope with a child-stabbing pervert, the discovery of a decomposing body in a coal bunker, a suspicious suicide, an equally suspicious burglary and the abduction of a teenage girl.

RD Wingfield created a memorable character in DI Frost.. Hard Frost is a great addition to the series

What would have made Hard Frost better?

The TV series has eliminated the ugly sexism of the novels and left an eccentric larrikinism. This makes the series quite acceptable with very little political correctness emanating from the character of Frost making him all the more acceptable.

What was most disappointing about R. D. Wingfield’s story?

Probably ok for its time, but my feeling is that R.D. Winfield was always an awful person. Charles Dickens characters can be utterly repulsive but we're not expected to like them or nudge, nudge, wink, wink excuse them. We are expected to like Frost as he is written. I can't stomach him as he is written. I will never listen to this book to the end. The main character is just too awful. It's all brainless tits and smut to him yet he's given the hard cases!

I didn't notice the performance, I was in shock that a favourite tv series had been made from such appalling books. I'll never watch the series again. It's been sullied totally by hearing one book!

No. I don't want to think about it and that's why it's taken so long to review. I've never hated anything quite so much. I kept expecting the Frost character to grow and improve. He deteriorated.

starting to get a bit to repetitive

still enjoyed this book but sadly unlike the greats like PD James the stories in these types of series always start to become repetitive and this is no exception. Mullet continued to treat Frost badly and Frost still ignored , yet another new detective arrives in this small town who thinks Frost is a twit only to be proved wrong.. That then makes the back story of the main plot so very unbelievable and boring that the desire to skip through is hard to resist. Have already purchased the next book so will give it ago but if its the same yet again will return and try something/someone else

Fantastic story, really enjoyed it, t only negative is that the narration does an awful job of frosts voice and speech, makes him sound so weird...the other stories narrated by others are much better in that regard

I felt the story was spoilt by the constant sexual comments which were totally unacceptable.

The DI Frost of the books is NOT the lovable cantankerous Jack we find on the TV series. Where as TV Jack may send up a few characters mainly in Mullet's direct. After reading a few of R D Winfield's books I can report this Frost is vulger, makes wildly inappropriate comments in very delicate situations , is crude and extremely sexist.

I'm not easily shocked by characters and often they say or think something not nice. The only reason I persevered with RD Winfield book is, if you can stomach said character floors , the entwining storylines are complex and it's interesting to see how the character puts the pieces together.

TV Jack though he is messy, and disorganized it is possible to follow his lines of thought. ln the unabridged recording of the book Jack appears to be suffering from ADD, his trains of thought are all over the place. I never thought I'd have so much empathy for Mullet.

I was lolled into a false sense of security as the abridged books read by David Jason are very much nearer the Jack we know and loved.

Listen to the Abridged books read by David Jason, it's evident they edited the character to be more like TV Frost which makes for a much more enjoyable experience. If you listen to the Unabridged books YOU HAVE BEEN WARNED!

A quality Frost offering with largely believable storyline somewhat stretched in places.such a pity that the narrator totally destroys the wonderful image of Frost which Thorne’s narration achieves. His performance would have made it 5 stars all round.

Great story, shame about the narration

R.D. Wingfield builds a great story and has the ability to keep the reader/listener interested throughout. For anyone familiar with the David Jason characterisation of Frost, the language and style may come as a shock.

What other book might you compare Hard Frost to, and why?

A very similar style to other R.D. Wingfield books which can mean the storyline becomes rather predictable.

Who might you have cast as narrator instead of Robin Browne?

Anyone - Stephen Thorne, who narrates Winter Frost is far better although not perfect. David Jason would be the natural choice although the language wouldn't really fit with his persona.

Could you see Hard Frost being made into a movie or a TV series? Who would the stars be?

The story is far more "gritty" than might be expected by those familiar with the TV series but once that shock is over, it is a good read.

This is the fourth in the excellent Frost series

I advise anyone who has listened to and enjoyed the earlier unabridged Frost books by R.D. Wingfield to take this one also when they come to it in the series. Certainly it is worth working through the series in order.

Some of the other commentators here are dismissive about Robin Browne's reading, as he reads this. In the unabridged series as it is here on Audible this narrator alternates with the other narrator Stephen Thorn, and some seem to like one better than the other. Thorn does more different voices for the characters, that is true, but in this one there are quite a few new accents on the one Robin Browne did earlier in the series, in particular Burton has an interesting NW English one. Where I think Browne shows he is just as good as Stephen thorn though is on the way his compelling reading of the non-direct speech parts of the story draw our attention in my view better than the way the other narrator does it.

As far as the story itself goes, who can fault it? The things which delighted you in the first three books will delight you again. The things which annoyed you will annoy you again. There is even more smoking, coarseness and sexism in this one than the previous one, either you can get around the fact that this is a description of England as it was and to a degree still is in certain circles or you can't.

The denouement in the final hour is very satisfactory. I won't spoil it by saying any more than that.

In sum, over 14 hours of really good entertainment. I don't advise buying the abridged versions of these books just because they are read by the actor you might expect - every minute of this is a good listen and so it follows that if you get the abridged ones you must be missing out on something.

MISOGYNY AT ITS BEST!

I simply cannot understand the high rating reviews here and on Amazon; Goodreads reviews are far more measured, many complaining at the negative, sexist references towards women, mainly by Frost, but seemingly compounded by a lot of his male co-workers. See also The Letterpress Project which succinctly describes how I feel about this type of writing. It's not often I delete downloads from Audible ... but this is a prime example. Hopefully these kind of references towards women will, eventually, be recognised for what they are ... mindless ignorance. With this subject being covered by Prime Time Media at the moment it illustrates how long this negativity towards women has been allowed to infiltrate society.

One of my favourites. Wingfield's ability to tell engrossing yarns about the overworked, utterly chaotic, grossly under appreciated but always masterly super-sleuth Jack Frost is greatly appreciated. I never tire of Jack, warts and all. Maybe it is because of his un-pc warts and ever-present vulnerable human frailty. He reminds me of that cartoon showing the back view of the mouse, finger extended, watching the plummeting eagle descending with its talons sharpened!