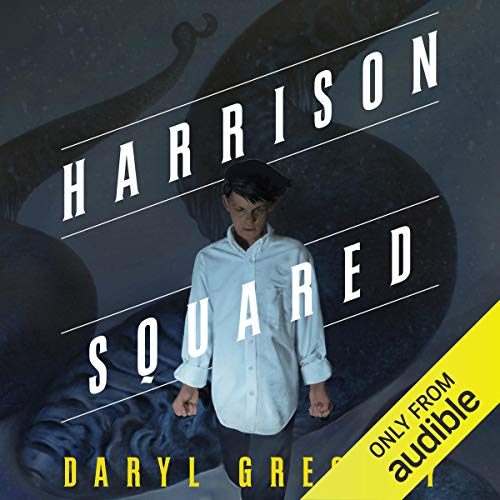 Harrison Harrison - H2 to his mom - is a lonely teenager who's been terrified of the water ever since he was a toddler in California, when a huge sea creature capsized their boat, and his father vanished. One of the "sensitives" who are attuned to the supernatural world, Harrison, along with his mother , has just moved to the worst possible place for a boy like him: Dunnsmouth, a Lovecraftian town perched on rocks above the Atlantic, where strange things go on by night, monsters lurk under the waves, and creepy teachers run the local high school.

On Harrison's first day at school, his mother, a marine biologist, disappears at sea. Harrison must attempt to solve the mystery of her accident, which puts him in conflict with a strange church, a knife-wielding killer, and the Deep Ones--fish-human hybrids that live in the bay. It will take all his resources and an unusual host of allies to defeat the danger and find his mother.

What listeners say about Harrison Squared

The premise sounded so interesting...

This is definitely a young adult book - I'm not sure I'd even call it young adult - it's actually geared toward early tweens. The description sounded intriguing and if it had been handled better, it could have been a great mystery. Things were weird from the beginning, though. A slower discovery of the peculiarities of the town and less scooby doo style monsters would have made for a much better book. Look, I like YA scifi/fantasy novels, but this was just to juvenile for my taste. Far more juvenile than the description suggests, so beware.

A Great Start to a New Series

I found Daryl Gregory from his other works-Pandemonium, The Devil's Alphabet, and Afterparty. I was reminded of Phillip K. Dick in his other books, so I was surprised when I found this one, which seems to be a tribute to HP Lovecraft, another of my favorite authors. There have been a billion new books based in Lovecraft's world, but few do it justice. This book has just enough real world feel for it to work. Also, Luke Daniels reads as a Brazilian scientist mother-that's worth it right there. This is good, light-hearted horror, and nothing that will keep you up at night. More of a "Scoobie Doo" than Night Gallery.

excellent story and absolutely amazing performance by luke daniels!!! i’m excited to move on to the next part of the saga.

worth the listen. funny, touching, witty, exciting and vivid.
the narration and writing were a wonderful match.

It started out a bit slow, but after a while it got so engrossing that I couldn't stop listening. I just had to know what happened next. And the ending was not at all what I expected. Definitely worth reading/listening to!

Great voice for a Deep One

This was for a younger audience but enjoyable. Excellent voice for a young Deep One.

Luke Daniels is one of my favorite narrators. This book had lots of fun and interesting turns.

A strange new home for a high school student with prosthetic legs. Standoffish students who act like they are in a cult. Fish people that can live on land or in water.

Yeah, there are some strange characters in this book. It may seem slow going at a few points or take you a bit to get into the story, but stick with it, it's worth getting through to the action packed conclusion

I really enjoyed this "YA" story.

I would definately buy or root for a sequel. It had a great story and well defined characters. And Luke Daniels never dissapoints with his narration.

I enjoyed this book. I have always enjoyed Luke Daniels narrations and this was no different.

I loved this book when I read it in print and decided to give the audio version a go and I'm so glad I did. The narrator is excellent. Each of the characters has a distinct voice which he perfectly carries over. The drama, humour and darkness comes across brilliantly in his delivery and I'm definitely going to be looking for more books narrated by him.
The story itself is Lovecraftian YA with Harrison Harrison the main protagonist who has to deal with a creepy new school, a missing mother and a new - and unusual - friend; all while trying to figure out what the hell is going on and stay out of the water.
If you love Lovecraftian fiction with diverse characters in life and death situations and a good dose of humour that will make you grin with delight then I can recommend this book.
Give it a go (I'll be listening to it again.)

We Are All Completely Young

Whilst I vastly prefer the darker and more adult tone of Gregory's 'We Are All Completely Fine' - which deals with similar subject matter and shares a character or two - this is a fun listen and definitely worth checking out.

It's a shame that the current state of the publishing industry forces a massively talented writer like Gregory to try for a Young Adult hit series rather than letting him push the boundaries with more challenging work (like the aforementioned, and thoroughly brilliant, 'We Are All Completely Fine').

Having said that, the lighter YA format does allow him to display his considerable comedic talents and the ending packs one particular punch that is fully Lovecraftian and anything but lightweight.

Luke Daniels narration is superb. He brings each character to life with great individuality: his rendition of a loveable Deep One(!) named Lub, for example, frequently had me chortling in happy amazement. Great stuff.