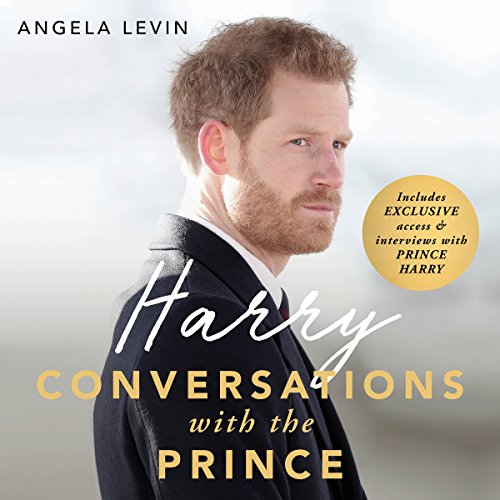 Once a reckless rebel, now a respected role model, Prince Harry is one of the world's most popular royals and the force behind giving the British royal family a 21st-century makeover. How has he done it? Harry: Conversations with the Prince is a three-dimensional look at what Harry is really like, both on and off royal duty. It is written by distinguished journalist and author Angela Levin, who accompanied Prince Harry on many of his engagements and had exclusive access to him at Kensington Palace.

The audiobook unwraps the real man behind the camera and his own perceptive insights. It delves into his troubled childhood and the lasting effect of losing his adored mother, Diana, Princess of Wales, so young. It explores his rebellious teenage years and the key defining moments that have enabled him to face his demons and use this experience to help others who struggle with mental, emotional and physical pain. Angela Levin found a complex man who has inherited his late mother's extraordinary charisma and is determined to make a difference.

After finding the love of his life in Meghan Markle, and in anticipation of their marriage this year, this is a celebration of the real Prince Harry.

What listeners say about Harry

The majority of the content of this book is a rehash from books and media articles about Dianna, Charles, Nanny Powell, Barbara Barnes etc. The reader has a lovely voice but makes some atrocious pronunciations of some words and names which I found extraordinary and then very irritating to the point I thought a computerized voice was reading the book. All in all I would say save your money, it's dreary.