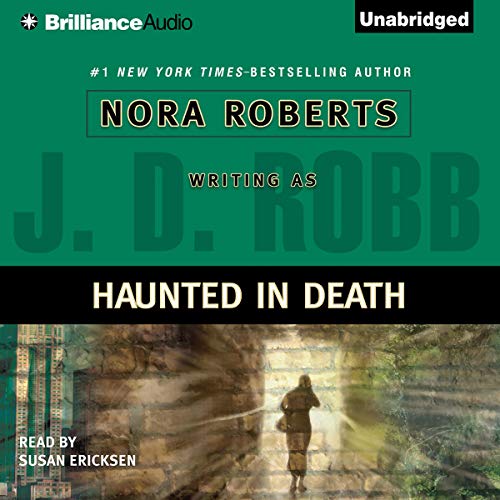 Number 12 is an urban legend in 2060 New York City. The hot club in the 1960s, it is now reported to be haunted...and cursed. Lieutenant Eve Dallas is called there to investigate the apparent murder of Radcliff Hopkins, its new owner and the grandson of the man who made Number 12 a cultural icon. Several bullets from a banned gun end his dream of returning the building to its former glory.

With everyone around her talking about the supernatural, pragmatic Eve won't let rumors of ghosts distract her from hard evidence. The case becomes even more bizarre when it appears to be linked to the suspicious disappearance of a rock star eighty-five years ago. As Eve searches for the connection, logic clashes with the unexplainable. She may be forced to face the threat of something more dangerous than a flesh-and-blood killer.

What listeners say about Haunted in Death

You'll hate yourself in the morning

Okay, you're hooked on In Death and you're going to buy this no matter what my review says. I get it - I ignored the bad review to buy it, too.

Here's the thing - it's bad. Really, really bad. Maybe Roberts had the flu when she wrote it. Maybe Ericksen caught it from her. But it stinks. The plot is laughable. Peabody, Meara, Roark and, it pains me to write this, even Dallas act so stupid you'd swear they couldn't solve a glide cart stickup.

So, all my fellow fans, go ahead and buy it. It's only three hours long, which means it's cheap, so do yourself a favor and spend the $10 in cash to buy it. That way, once you've finished it and need to get the bad taste out of your mouth, you'll still have a credit left to get a GOOD book.

I'm off to Born in Death with high hopes...

Oh - and if you hate this one, please come back and write a review...

I've had the impression throughout this series that Robb (aka Nora Roberts) interjects these "half" novels to sort of let her creativity loose a little and maybe get a little silly or write about something that the characters, otherwise, would never admit to, let alone do. For example, in this one, the murder looks like, and all the evidence points to the fact that, a ghost actually committed the crime. Roarke and Peabody and every one else are all into it, and get their kicks off the thrill of it. And Eve just stands firm with her, "Oh PLEASE!" attitude. It's a good break from the seriousness of the series, although it may get a little *too* silly at certain points. Still fun, though! And Lorelei King is brilliant as ever, even with the silly parts :)

I just forced myself to listen all the way through "Eternity in Death," and made myself try to listen to this book because I paid for it. Let me save you time and aggravation: Save your money!!
I am a seasoned audio-book listener with a library of over 75 audiobooks in this genre. I can tell you that this book, if the curse words were removed, would be better placed in the children's section. It's written on a fifth-grade level (if that); the plot is flat and the reader turns the lead character's side-kick into an audible version of Gomer Pile.
The female lead character lacks just that- character. She's curt, bossy, and one-dimensional. Her love interest is even less developed; leaving one to believe the author used Johnny Bravo as inspiration. His character is transparent, self-centered and exudes machismo.
I keep expecting the side-kick to say, "Aw, golly gee; I thought the amusement park was haunted by a real ghost, not the former owner in a Halloween Mask. "
Bottom Line: Wasted Money, Angry Listener. I'd laugh if I hadn't just spent $30 for two of these audiobooks.

Have you listened to any of Susan Ericksen’s other performances before? How does this one compare?

Susan Ericksen's performances are always top-notch! Love her vision of the story and how she embodies the great characters!

Loving the whole Eve Dallas series, sometimes the short novellas leave me wanting more. But this one was complete and fun to listen to. Susan Ericksen does a great job on the voices even the "ghost". So fun to listen to Peabody getting the willies.

Mini spooky story that was originally a novella released in an anthology with other authors. Ok, but not her best. Ericksen is voice of series.

Overall an average story. Narrator was good. Start was a little slow. Ending was satisfying

Would you consider the audio edition of Haunted in Death to be better than the print version?

I think any audio edition is better then print ;)

What other book might you compare Haunted in Death to and why?

So many books right now are of paranormal, futuristic things. I'm not sure if I could compare.

Which character – as performed by Susan Ericksen – was your favorite?

WOW that is a tough one. She is so good with all of them. I do love Peabody. Great contrast from Dallas

This is a short and sweet story. That is a little Spooky too! It would be great for Halloween time. I hope you enjoy it. All of her books are outstanding!

All I can say is this storyline was weird. Unlike other J D Robb books I have read.

Haunted in the 21st century

J D Robb may be a pseudonym for Nora Roberts, however in my view this series of books is written in a different style to her usual style - they stand alone as a body of work. The series is set in the mid 21st century and Robb paints a believable picture of the time. The heroine is believable and it is easy to identify with her. The author manages to introduce the supernatural - a first for her as this series is imminently 'practical' within the genre of police procedural, without asking the reader to believe. Even if you don't, the story works well and is definitely up to J D Robb's excellent standard of storytelling.

Good listen. A few frightening moments for Peabody, comical for those listening. Just another great book in the overall series.