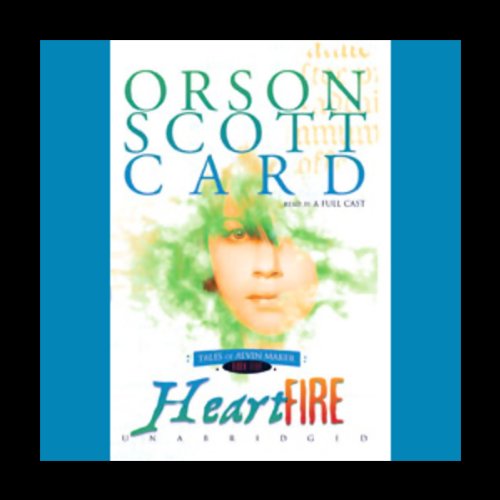 Peggy is a Torch, able to see the fire burning in each person's heart. She can follow the paths of each person's future, and know each person's most intimate secrets. From the moment of Alvin Maker's birth, when the Unmaker first strove to kill him, she has protected him. Now they are married, and Peggy is a part of Alvin's heart as well as his life. But Alvin's destiny has taken them on separate journeys. Alvin has gone north into New England, where knacks are considered witchcraft and their use is punished with death. Peggy has been drawn south, to the British Crown Colonies and the court of King Arthur Stuart in exile. For she has seen a terrible future bloom in the heartfires of every person in America, a future of war and destruction. One slender path exists that leads through the bloodshed, and it is Peggy's quest to set the world on the path to peace.
©1997 Orson Scott Card (P)2007 Blackstone Audio Inc.

"Another in Card's superior fantasy series about Alvin Smith....one more absorbing entry in this brilliantly conceived and fetchingly rendered series." ( Kirkus Reviews)
"Alvin and Peggy's adventures are set against an intriguing backdrop of what America might have been....Card is a consummate storyteller able to create a believable world peopled with strong, solid characters." ( Voya)

I loved listening to Verily Cooper and his rhetoric. This book was very satisfying for me, I think it might have been the best of the series so far

I thought with this being the fifth book, it could not keep my attention but I was wrong and pleasantly surprised!

The story will keep you guessing and on the edge of your seat wondering what will happen next. There was humor, suspense and shock as the characters began to grow in their nacks and adventures.

The only thing I thought could be better was the transition with the narrators. They would sometime switch in mid story which I thought was a little confusing and unnecessary. Otherwise, great book!

really enjoying this series. I look forward to hearing a great ending. thanks Orson Scott Card

I really do love Orson Scott card as a storyteller. And this cast did a superb job of bringing this book to life. I found myself making excuses to put off something else so that I could continue listening to the ongoing events at the moment in this novel.

Alvin Maker is my hero!

I can't get enough of this series - as is my truth with all the series by Orson Scott Card I've read thus far into my discovery of his limitless gift of writing. Captivating and endearing. I'm hooked.

the other books were better in the series. got to read them all though. the character development was weak.

This one was really slow, and nothing much that I cared about seemed to happen. Only bright spot for me was John Adams.

Not the best in the series.

I think Card did a good job developing the story and the characters that existed. I am not as happy with some of the characters he introduced and developed them; one in particular. It felt as though Card used her more as a plot device than a person of her design. she had flip flopping traits that would have been reasonable if not felt so contrived. The potential for organic change was present, but circumvented for unnecessary preluding. I still rather enjoy the world, series, and main characters and look forward to thr last book.
The reading was phenomenal, as usual.

As Always Card is brilliant

Terriffic story the entire cast is brilliant. The story is superb I love these books while in the car or on a flight.

I am enjoying this series of books
and are worth the time I. have enjoyed listening to it.

Heartfire and the Alvin series

This Audible presentation of Card's Alvin series is a triumph. It is centred around the premise that innate skills can manifest as magical 'knacks' that can change the world. This is no 'twee' story however as it raises issues of prejudice, slavery and religion in a context that grabs the listener's attention and leaves them wanting more. I have read most of Card's bibliography but listening to these stories provides a new opportunity to enjoy this master story-teller at his best.

Exponential decay in a book series.

Shockingly uneventful. Even if you have read through the previous four installments in this series and noted a slowing down in the story, nothing can prepare you for exactly how little happens in this book. I have read many of OSC's books and thoroughly enjoyed them, including all the 'Ender' and 'Enders Shadow' series, most of which (with exceptions) have a brilliant combination of story, action and character, so it is utterly bizarre just how little Orson has to say in this book.

On the first audiobook of this series, there is an introduction by OSC himself declaring his intention of writing a series of very American fantasy books 'to rival The Lord of the Rings'.
Unfortunately, he seems to have completely given up on this somewhat optimistic idea and has instead fashioned a series of books that are starting to make the Slough telephone directory look like the script for the new Jerry Bruckheimer movie.

I now have the very real dilemma of whether, for closure, to put myself through listening to the sixth and currently last in the series (so far, as the author has threatened a seventh!) or to preserve those 11 never-to-be-regained hours of my life for something more rewarding.

To quote Danny from the cult-film 'Withnail and I', 'If you're hanging on to a rising balloon, you're presented with a difficult decision - let go before it's too late or hold on and keep getting higher, posing the question: how long can you keep a grip on the rope?'

I think it may be time to let go. Two broken legs and a fractured pelvis have to be better than this.