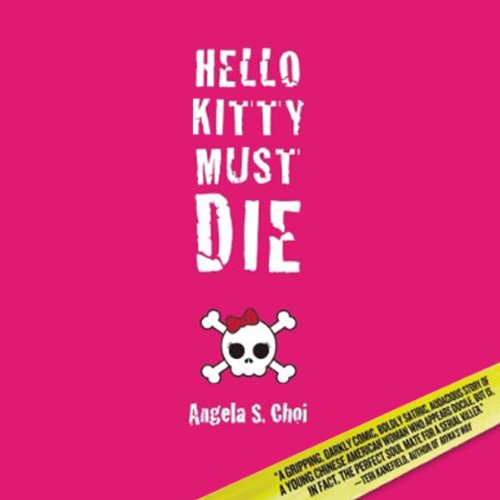 If you count yourself among the denizens of contemporary dark satire who assume that gleeful nihilism is the purview of only middle-aged white men like Chuck Palahniuk and Bret Easton Ellis, prepare to broaden your horizons and meet Angela Choi. This is Choi's first book, and Angela Lin, noted for her voice work on the novel Lost in Translation, narrates it with triumphant cheekiness.

This is the story of Fiona Yu, a jaded Bay Area lawyer approaching 30 while saddled with all the stereotypical baggage of living with her traditional Chinese parents. Choi herself lives in San Francisco, turned 30 not long ago, and quit her law firm to write this book. As this book contains about 20 murders, hopefully Choi's art does not mirror her life too completely. Fiona is a badass, not a Hello Kitty. A Hello Kitty is the kind of Asian woman who loses her virginity to an arranged marriage then spends the rest of her life quietly cooking and doing laundry.

Lin hilariously puts on her most cartoony Chinese and vacant Californian accents as Fiona bitterly mocks both the Asian and the American cultural institutions that keep her from having a good time. With the help of her sidekick, a childhood friend turned hymen reconstructive surgeon by day and lady-killer by night, Fiona plots to escape her arrogant boss, her boring fiancé, and her sheltered existence under the thumb of an exasperating father who is constantly reminding her to wear lipstick. Their tools for accomplishing these remarkable feats of social dexterity include a half dozen Snickers bars, a boat called The Countess with the ‘o’ scratched out, a pretty sexy collection of stiletto heels, a love of Kurt Cobain, and the will to do very bad things to people who sort of deserve it.

A refreshing change of pace from the usual black comedy, this tasty little tale of vengeance served hot over ramen noodles is equal parts charming and obnoxious. Angela Lin's salty sweet rendering of a unique new character aberration that possesses some wickedly familiar sentiments is cause for optimism on the satirical battlefield of inhumane thoughts and criminal deeds that has too long been dominated by white guys. Prepare to be shamefully delighted. —Megan Volpert

On the outside, twenty-eight-year-old Fiona Yu appears to be just another Hello Kitty - an educated, well-mannered Asian American woman. Secretly, she feels torn between the traditional Chinese values of her family and the social mores of being an American girl. To escape the burden of carrying her family's honor, Fiona decides to take her own virginity. In the process, she makes a surprising discovery that reunites her with a long-lost friend, Sean Killroy. Sean introduces her to a dark world of excitement, danger, cunning, and cruelty, pushing her to the limits of her own morality. But Fiona's father throws her new life into disarray when he dupes her into an overnight trip that results in a hasty engagement to Don Koo, the spoiled son of a wealthy chef.

Determined to thwart her parents' plans to marry her off into Asian suburbia, Fiona seeks her freedom at any price. How far will she go to bury the Hello Kitty stereotype forever? Fiona's journey of self-discovery is biting and clever as she embraces her true nature and creates her own version of the American Dream, eliminating - without fear or remorse - anyone who stands in her way.

What listeners say about Hello Kitty Must Die