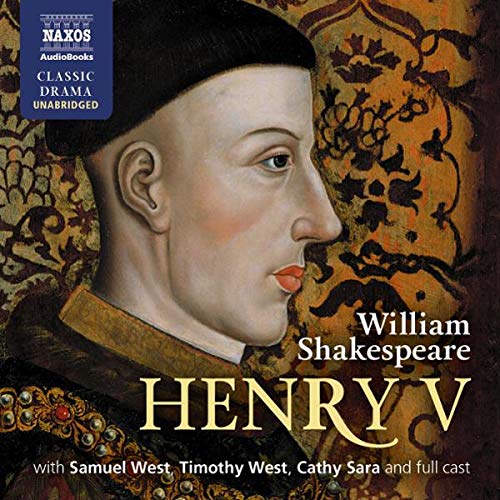 Henry V, which dates from 1599, is the last in Shakespeare's series of plays based on English history. It is also, of course, among the Bard's best-known and most-performed works. It's given rich new life here by a full-cast presentation that combines classic literature with classical music.

What listeners say about Henry V

A wonderful rendition. I've listened to it twice. Harry's concern for the welfare of his troops is so exactly what an army needs from its commander that it makes me sad for any nation whose troops are less valued and supported than King Harry's Englishmen. His wooing of Catherine is so charmingly done that it made me laugh. I LOVE this play!

“We few, we happy few, we band of brothers. For he to day that sheds his blood with me, shall be my brother.”
― William Shakespeare, Henry V, Act 4, Scene 3

It is hard to find fault with Henry V. It isn't Shakespeare's BEST, but his best are almost mythicly high and unassailable. But Henry V is pretty d*mn good and it owns one of the greatsest and most memorable monologues ever (Hal's St. Crispin's Day speech). It also has more French imbeded into it than any other Shakespeare play than I can think of. So, while I applaud the Tennis diplomacy scene, I'm not a huge fan of the Katherine learning English from Alice. Meh. Not every serve goes over the net Will. But still, taken as a whole it is a great play. The Battle of Agincourt is high drama and seems to match the drum of the audiences' heart with the drum beat of war. Everytime I read Act 4 I feel moved, inspired, transfixed. Shakespeare might not have caught Livy as the world's greatest composer of fictionalized historical speeches, but he was definitely a gifted second to Livy.

Some of my favorite lines:

“...for coward dogs
Most spend their mouths when what they seem to threaten
runs far before them.” (Act 2, Scene 3)

“In peace there's nothing so becomes a man
As modest stillness and humility:
But when the blast of war blows in our ears,
Then imitate the action of the tiger;
Stiffen the sinews, summon up the blood,
Disguise fair nature with hard-favour'd rage;” (Act 3, Scene 1)

“I am afeard there are few die
well that die in battle; for how can they
charitably dispose of anything when blood is their
argument?” (Act 4, Scene 1)

“There is some soul of goodness in things evil,
Would men observingly distill it out.” (Act 4, Scene 1)

Well executed, except that there is something strange about the audio - there are sequences where there is a lot of ambient noise (resonance, or gunfire) which suddenly vanishes for a moment when the speaker stops talking. This is particularly marked during the 'little touch of Harry in the night' sequence. Instead of the murmuring of soldiers around campfires in the quiet before the storm, this version for some reason seems to have gunfire going more or less continuously through the night, which starts and stops as the actors start and stop speaking. At first I thought there was something wrong with my earphones, and it might be there's something idiosyncratic about my setup.

This is a very well-produced and well-acted production. Sam West's performance is splendid; he's extremely clear in his diction and suitably ambiguous in his characterization of Hal, sliding smoothly between Machiavel and war hero.

Could not find this audiobook anywhere except here on Audible.com. Great for students!

I have only red a few Shakespeares. I definately would recommend reading or going to the actual presentation. Audio listening didn't work for me. Although it could have been me, I wasn't able to keep up with the characters.

No other options available

A good cast- the West family out in force (as usual for audio Shakespeare) Timothy West as Narrator and Samuel West as Henry V- which he does very nicely- the scene at Portsmouth; the discovery of the conspiracy, I thought he did very well indeed.

That apart I thought it all rather a lack-lustre production- flat and uninteresting- too much medieval chanting- particually as a substitute for battle noises- which seems to me idiotic as surely the whole joy of audio is that you can produce massive effects with really no budget at all.

The comedy elements also fell down rather- one got the impression that the actors didn't understand the words or get the jokes.- but very poiniant death of Falstaff.

Criticisms aside, this is the only Henry V available, and it is unabridged and, frankly, it's not the greatest play Shakespeare ever wrote and I'm not sure that anyone could make the play a real audio success