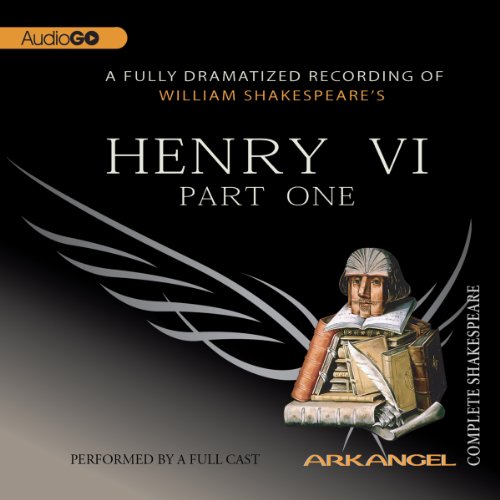 The all-conquering King Henry V is dead and the throne is occupied by his infant son, Henry VI. The good Duke Humphrey of Gloucester has been appointed protector, but a struggle for power soon develops between the young king's Lancastrian relatives and the powerful house of York under Richard Plantagenet. Meanwhile the French, led by Joan of Arc, the maid of Orleans, threaten to win back the territories lost to Henry V.

Henry VI Part One is another one of Shakespeare's early plays. There are three Henry VI plays, and there's a lot of discussion in scholarly circles as to what order they were written in and whether Shakespeare had any collaborators. The first part is especially problematic in that respect.

One theory that seems to be in favor at present is that Shakespeare originally wrote a two-part play about Henry VI that were later designated parts two and three. Rival playwrights, seeing the success of his plays about the reign, created a play that focused on other parts of the story: the wars in France, the hero John Talbot, and the evil and cunning (to the English!) Joan of Arc. This play was also successful; and eventually, because Elizabethan actors often moved from one company to another, it came into the possession of Shakespeare's company. He added a few scenes to tie it more closely to his own plays, and it was staged as a prequel.

However it came to be written, it's an exciting, colorful play with one spectacular battle scene after another. The courageous Talbot fights the evil French at Orleans, Rouen, and Bordeaux; cities are taken, lost, and retaken; swords clang and cannon go off. Meanwhile the English nobles at home quarrel amongst themselves and fail to send Talbot the support he needs.

The quarreling is more intense than usual because the King of England, son of the valiant Henry V, is a studious, uncertain, and ostentatiously devout minor. Played by none other than David Tennant, Henry VI is a weak king, who pleads ineffectually with his nobles to love God and befriend each other.

Meanwhile the Duke of York, played by Clive Merrison - the voice of Sherlock Holmes for BBC radio - begins to lay the groundwork for his own bid for the throne. He is, as so many characters in this play are, a descendant of Edward III, and while York's claim isn't as strong as he would like to think, it's not imaginary; and there's no question he would make a stronger and more effective king.

Talbot is overcome and killed by the deceitful French, and the "witch" Joan of Arc - played by Amanda Root - is captured and burned. The play ends in midstream, as the Duke of Suffolk lays plans to have Henry marry the noble but penniless Frenchwoman Margaret. Suffolk's intention is to dominate Henry through Margaret. Part Two will show how that works out for him. (Spoiler alert: not so well.)

The Arkangel production is terrific, as almost all of the Arkangels are, giving this rarely produced and imperfect play the same commitment and energy they give to the major tragedies. Sound, music, and top-knotch acting are all integrated into a rapidly moving historical epic.

One caveat. Though the producers go out of their way to make the factions clear, it IS audio. On stage, when the various groups enter, they wear white roses or red, instantly communicating their allegiance. That important visual cue is missing in audio. With such a large number of characters, it might be helpful to keep a copy of the play handy.

Henry VI, Part I is considered by some to have been written AFTER Henry VI, Part II and Part III so I'm technically reading this one a bit early. However, for narrative flow I am reading it first. Along with the other two Henry VI plays, and along with Richard III it makes up Shakespeare's War of the Roses tetralogy.

I wasn't super impressed. I mean this isn't Richard III or Hamlet or Macbeth. But this is young Shakespeare gearing up and there are flashes of brilliance and moments of perfection. I love how Shakespeare is utilizing Hall's The Union Of The Two Noble Families Of Lancaster And York, 1550 and Holinshed Chronicles of England, Scotland and Ireland to frame the fractures that happen between the nobles. While I think Joan of Arc is not given her due by Shakespeare and I really feel there was room here for more of an expansion of Joan, the scenes she was in, she stole. Finally, I LOVED the scenes between Lord Talbot and his son as they prepare to Battle Joan of Arc and Charles, Dauphin of France.

Some of my favorite lines:

"For I must not yield to any rites of love,
For my profession's sacred from above.
When I have chased all thy few form hence,
Then will I think upon a recompense."
- Joan, Act I, 3

"For friendly counsel cuts off many foes."
- Henry, Act III, 1

"Care is no cure, but rather corrosive,
For things that are not to be remedied."
- Joan, Act III, 7

"Poor boy, he smiles, methinks, as who should say
'Had death been French, then death had died today.'
Come, come and lay him in his father's arms
My spirit can no longer hear these harms,
Soldiers, adieu. I have what I would have,
Now my old arms are young John Talbot's grave."
- Talbot, Act IV, 7

Great performance of a great story.

This was way better than I expected. It includes the story of Joan of Arc and much else besides. Highly recommended.

...all of the battles. Had to refer constantly a Sparknote summary to keep things straight. But some really memorable scenes (e.g. white vs. red rose) and characters (e.g. Joan of Arc).

I loved the story. It was my first time through but I look forward to many more reads!

2nd read through. I like the first half better. 🙂

Great if you're familiar with the context.

I enjoyed filling in the story. Great voice acting. As dramatised history, not Shakespeare's best.