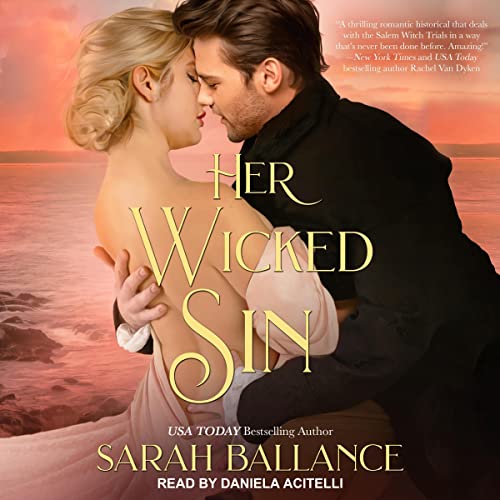 On a moonless night, he rides into the winter forest on his beast as black as midnight....

Dashing stranger, Henry Dunham, comes to Salem on a mysterious errand, but is thrown from his horse in the dead of night and rescued by the local Puritan midwife, Lydia Colson.

Haunted by her past, Lydia is running from her own dark secrets, avoiding intrusive questions by pretending her dead husband is simply...away. But when she and Henry are caught in a compromising situation, one punishable by Puritan law, he saves her from scandal by claiming to be her errant spouse...and claiming her bed.

Forced to fake a marriage, Lydia and Henry find their passion overwhelming and their vows a little too real. As their lies become truths, a witch hunt closes in on Lydia, threatening not only their burgeoning love, but her life.

What listeners say about Her Wicked Sin