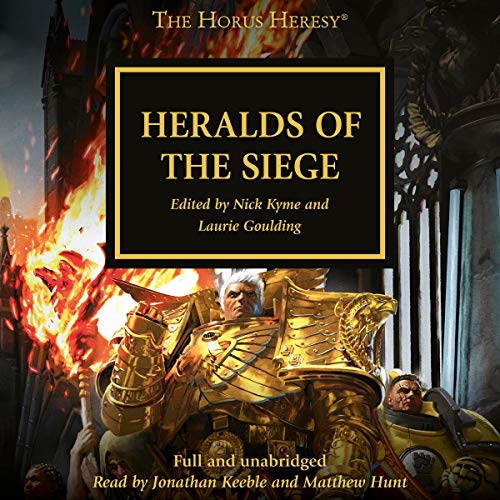 A galaxy burns and brother turns on brother as the conflict brought about by a beloved son’s betrayal reaches its fateful end. The Warmaster Horus has triumphed. His massive fleet at last nears Terra and the patriarchal Throne of his hated father. Many have fallen to bring this moment about; their tales are the ashes upon which the Heresy was born and prospered. Others have played their own small parts, drops in an ocean of war and blood.

None of it matters.

Terra looks to the skies as it raises its defences. Armies muster, heroes raise their swords, citizens cower. The war is coming. And nothing can stop it.

What listeners say about Heralds of the Siege

Loved some of the stories here, overall tho im not a fan of the collection of short stories format

This one goes quick! "The Board is Set" was AMAZING! Jonathan Keeble is hands down one of the best narrators for GW and the Black Library, matched only by Gareth Armstrong in my opinion. This one will not disappoint you. This one creates the sense in the listener that a great and Epic story is coming to a close. What ever will we do when the Horus Heresy series ends? 🤔

Another well crafted masterpiece. Belongs in an opera house. Kudos to those who helped in this project. Would love to hear this group do an adaptation of the Word Bearers Omnibus by Anthony Reynolds. Death to the Corpse Emperor!!! Glory to the True Gods!!!

that was an amazing book and such a powerful ending. I love how the characters cross over books and how the time-line is being filled in piece meal

Each story is worth a novel

it was an all round good book to read . I enjoyed it. JK does another great job narrating along with the other narrators.

Wow, The board is Set!

Amazing, absolutely amazing! From the 1st story up until malcador plays a game of regicide with the emperor.

The board is set , the pieces are moving

not bad , can't wait for the siege of terra to begin. narration is great. , I'd say save one or two I enjoyed all these stories . the Emperor Protects

Short stories but all relevant to lead upfor Siege of Terra. Different narrator for one story was somewhat off putting

Heresy anthologies have lately been a hit-and-miss affair packed with more filler than anything else. Heralds of the Siege marks a welcome return to form, and many rewards for those who've stayed the course. The stories are no longer filling in time to get from point to point, and really, truly finding new character beats and nuances in long-established figures. Even the venerable Jonathan Keeble is upping his considerable game: his portrayal of Leman Russ borders on Brian Blessed levels of unhinged awareness and truly polishes off an already excellent story. This one - Magisterium - finally gives Constantin Valdor a real voice, and brings a much greater understanding of the Custodes beyond just plain arrogance. As with all anthologies there's one or two duds; Matthew Hunt in particular hasn't quite grasped the 30k lexicanum but it's early days and those jarring pronunciations should be soon hammered outyl. As with the last few Heresy novels the pace seems to be renewed, with authors such as Thorpe, Wraight and French once again stepping up to the mark where only Abnett or McNeill would previously tread. Worth buying indeed.

I really enjoyed the stories, Johnathan K’s performance was great (as always), Matthew Hunt was not so good (hence the 3 star performance rating) luckily he only narrates 1 story.

One of the best anthologies

Really good tales leading up in the siege of terra and it was great to hear revelation play Malcador, the narration apart from the one story was exceedingly good

Most flesh out the end of other stories. e.g. Exocytosis takes place right after Angels of Caliban. The performance was outstanding. I particularly loved the thunder legion part with Matthew Hunt.

The build up to the seige begins

Really good stories fantastically read. One of the stories a little bit weak and another I'd heard before but adds tension and insight into the final stage of the heresy

some atories are awsome, like the last one, others....well not so much. jonathan keeble greate like always

good addition to the lore

there is one big problem with a lot of short story's, some are a lot better than others. this is the same here didn't really enjoy some others I did.

Short story in this book read by Matthew Hunt was hard to get through. His pronunciation of "butcher" as buh-tcher and "bullet" as buh-let is horrific. Not even an accent problem as he speaks perfectly clear English. So, what gives!?

What a fantastic read/listen! Not many times do you get a hit with every short story! But this time games workshop have outdone themselves! Do yourself a favour and immerse yourself into this book!

One Door Closes, Another Opens

This book almost feels the closing of one door and opening another as the Horus Heresey begins its end. Many of the stories are written with a feeling that the war on Terra is about to break like a cresting wave; giving the briefest hints at the devestation to come. The voice acting is superb as always and being short stories you can listen to one, take a break and then continue with another.