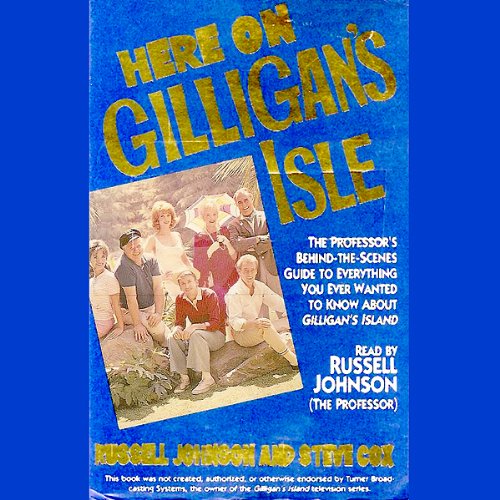 The Professor's Behind-the-Scenes Guide to Everything You Ever Wanted to Know About Gilligan's Island, Including a Complete Episode Guide and More!
Written by: Russell Johnson, Steve Cox
Narrated by: Russell Johnson
Length: 2 hrs and 47 mins
Categories: Arts & Entertainment, Film, Radio & TV

At last, everything you ever wanted to know about "Gilligan's Island" from the Professor himself, Russell Johnson. Sit right back and take a nostalgic, first-hand look into the world of Gilligan's Island. Directly from the ship's log, Russell Johnson takes you the day when Sherwood Schwartz shipwrecked seven strangers on a tiny desert isle - and America hasn't been the same since.

Here on Gilligan's Isle is a treasure trove for true fans, with original interviews with all the cast, behind-the-scenes gossip, and trivia. Don't be fooled by imitations: this is the audiobook for anyone who ever loved - or even watched - Gilligan's Island!

If you're a Gilligan fan, a must listen!

I absolutely loved Russell's story. I was expecting something less deep but it way exceeded my expectations!

Great account of the behind the scenes goings on.

Where does Here on Gilligan's Isle rank among all the audiobooks you’ve listened to so far?

What other book might you compare Here on Gilligan's Isle to and why?

My Lucky Life by Dick Van Dyke. Russell Johnson (Although not as good as he thinks he is) tells a very realistic story of how they got along and when they didn't. It was a good account of how things were done on television way back.

Which character – as performed by Russell Johnson – was your favorite?

Alan Hale. That was a surprise to me but I really got to like the man as Russell Johnson described him.

I like to read books about the old sitcoms. This was one I was glad I read.

Sit Right Back and You'll Hear a Tale...

As I write this Russell Johnson passed away from natural causes in the past week at age 89....RIP Professor...

I was a huge fan of Gilligan's Island after it went into syndication and was shown weekdays in the late afternoon after I arrived home from school. While I have viewed the specials and made-for-TV films made after the series, the Professor's memoirs and commentary really resonated with me.

If you are even a mild fan of the show, get this title. If you are/were a rabid fan...this is a must listen. Finally, for all you guys out there like me who were Gilligan fanatics as kids, I only have one question for you: Ginger or Mary Ann? :) :)