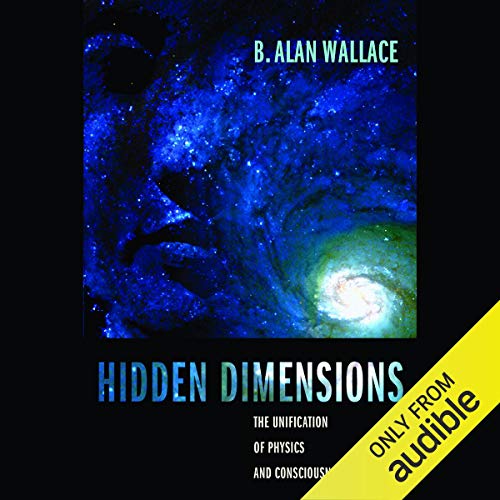 Written by: B. Alan Wallace
Narrated by: Stow Lovejoy
Free with trial

Bridging the gap between the world of science and the realm of the spiritual, Wallace, a pioneer of modern consciousness research, offers a practical and revolutionary method for exploring the mind that combines the keenest insights of contemporary physics and philosophers with the time-honored meditative traditions of Buddhism.
©2007 Columbia University Press (P)2008 Audible, Inc.
Consciousness & Thought Science & Religion Buddhism Psychology Science Physics
Show More Show Less

"An ambitious book...timely and important reading for anyone interested in consciousness." ( Journal of Consciousness Studies)

What listeners say about Hidden Dimensions

I can see how some people may be put off by the heavy emphasis on Buddhist religion... however, to just dismiss it as Buddhist propaganda is missing the point entirely. Wallace definitely takes pains to point out that he is not advocating Buddhism over Christianity, stating in the conclusion that Science, Buddhism, Christianity and other world religions have "complementarities", in a very specific way. As a non-Buddhist, I did not find it to be too pushy or offensive in any way.

So, why the emphasis on Buddhism? Simply because it is the best known example of a contemplative "science" that has been in continuous existence for over 2 millennia. As Wallace points out, there were other contemplative traditions (such as Plato) that went out of style with the rise of classical science in the west. Now that we are finding out that classical science cannot explain the ultimate nature of reality, he is making a very compelling case for a new science that blends the modern quantum theories with a contemplative science. Buddhism is proffered as the shining example of what the latter may look like, with the caveat that we have to take it to the next level -- namely subject the claims to scientific scrutiny in a very particular way.

If you have not listened to the speculative fiction book called Anathem by Neil Stephenson, I would highly recommend it. That book is essentially a sci fi look at what a world that has mastered this new science may look like. Since it is a fictional world, Stephenson does not have to resort to using examples like Buddhism. Instead, he creates a special class of scientists called Theors who are Avout and live in a Concent (all made up words, like Anathem), and develop Praxis (aka technology) from this new science. Very innovative and entertaining, and these two books, imo, should be listened to back-to-back. I did Anathem first, then this one, but one could go the other way too.

An exciting vision of a new science.

I agree with Bernard, this is deep and thought provoking material. I kept being reminded of Roger Penrose's "Emperor's New Mind" where the topics of consciousness and its relationship with reality are discussed. Similarly, Popper's insights about scientific method also came to mind. Our scientific methods don't really prove anything: "true" in the scientific sense just means 'not yet falsified'. As to the Buddhist slant, this stems from the fact that Buddhism takes a scientific approach to spirituality and has never been about doctrine and faith. Belief is never demanded (or enforced). In Buddhism, as discussed by Ken Wilber, John Daido Loori and others, the approach is always "Do the experiment yourself and see if you get the same result". Unfortunately, most people are not willing to do the experiments, especially if they involve sitting zazen for 10 years! I recommend this work to anyone interested in the intersection of science and religion. It raises as many questions as it answers but they are, in opinion, very important and timely questions.

Not for the average reader / listener

This book seems to have some really good content however, listening to it is painful and hard to follow unless you have some sort of formal scientific training or have really geeked out on your science vocabulary. Not for the average reader.


There is a book that brings adifferet view of the universe, consciousness and I believe it you will love it.

It is different from the regular scheme. This is a scientific book, yet it is refreshing to any open minded individual willing to learn more about the universe and different theories and how it applies to consciousness.

I agree with Kal, Michael, and Bernard. This book does not denigrate any religion but identifies most closely with buddhist teachings. Having read Anathem recently, I second Kal's comment that, if one has read either of these books, then one should read the other as well.

This book is religious propaganda for Buddhaism clothed in pseudo-scientific jargon. It belongs alongside of Scientology.

This book starts out with a reasonable tone and premise; that internal cognitive states should be studied scientifically with an open mind. As the book progresses, it quickly becomes more and more clear that the author already has a pretty good idea how any such studies will come out, and does not have a very good understanding of modern physics. The author uses modern physics theories from the mainstream to the wacky with equal abandon and clearly has preconceived notions of how consciousness and modern physics are related. He picks and chooses from quotes and theories to support the connections between (some) modern physics theories and (some) traditional Buddhist teaching (ignoring or glossing over anywhere they might disagree). By the end of the book only a pretense of science is left, as the author describes the claims of adepts with rainbow bodies of light that shrink and dissolve when they die leaving only some nail clippings behind. I have an open mind and presume that if there are fellows about with rainbow bodies of light that tend to evaporate from time to time, someone will measure this and then we can have a scientific discussion about the phenomena. The book also goes a bit wild with a mishmash of psychological, philosophical, religious, and scientific jargon. Although open mindedness is encouraged (in others) the author seems to have already reached his conclusions as in ???Once we cease objectivizing ourselves and everything else and recognize the one taste of all phenomena as displays of primordial consciousness we enter into a state of meditative equipoise in which all phenomena dissolve into the great expanse with no object, obstruction, or intentionality.??? This does not sound like open minded enquiry, but religious dogma or personal opinion. As religions go I like Buddhism (Buddhists tend not to kill people that disagree with them) but this book seems to lack most of the good parts about Buddhism and almost all the good parts of science.

If you are a person well read on Philosophy and Physics, with common ground being assumed by the author that you too have read the great thinkers' ideas, then this book which discusses the current state of science and investigation into Consciousness, along with Buddhist terminology and definitions of Consciousness, may be of interest to you.

As a person who un-enrolled from a Philosophy class after one look at Chapter 1 and listening to a couple of lectures, and who also repeated Physics 1a, due to a lack of interest in the topic, but it being a requirement for my major . . . Philosophy or Physics have never interested me. Never.

Ironically, I do have a deep interest in Consciousness so have suffered through most Consciousness-related books with a usual forced review of Philosophy or Physics basics.

This book, unfortunately for me, was about significant ideas put forth by great thinkers in Philosophy and Physics, identifying their theories or accomplishments and discussing the impact or meaning of their ideas, particularly in relation to Consciousness in the more broadly defined Consciousness (greater reality than just matter.)

The current restrictive state of scientific investigations into Consciousness was discussed too, reminding me a bit of Rupert Sheldrake's recent books on a similar theme.

More background reading of the classics in both Philosophy and Physics would be helpful to get the most out of this book.

The introduction and explanation of Buddhist terminology related to Consciousness was interesting - maybe with self-application to deeper reading of classics and the greats in Philosophy and Physics and more disciplined meditative practices this information and discussion of ideas will mean something to me and I can revisit this book - in about 10 or 20 years.

B. Alan Wallace is smart. He knows contemporary physics and history of science inside out. He speaks as a Buddhist, but, as it turns out, Buddhism is a good platform to argue from, if you're aware of scientific over reach, if you can see how full of holes scientific materialism is. And, ironically, the scientific enterprise would benefit from the reinstatement of an attitude of skepticism of the sort Wallace recommends.

A Sheep in Wolf's Clothes

There are some interesting points raised by the book, but I never could get past the fact the author thought Duckbill Platypuses were extinct. Anyway the book is written in very academic prose with a dry narration. Not good for listening if you are driving. I also couldn't equate Plato's ideal forms and quantum mechanics, but again I could have missed something while commuting. There were times that I felt I was listening to John Twelve Hawks' The Traveler and other times that it was a religious tract for Buddhism. Bottom line the book started out well and then got into a how to on Buddhism meditation. If that's your thing, go for it. Otherwise approach cautiously

A coupling of all disciplines

Need to experience the strate state lolz
A theory of everything. very informative and educational