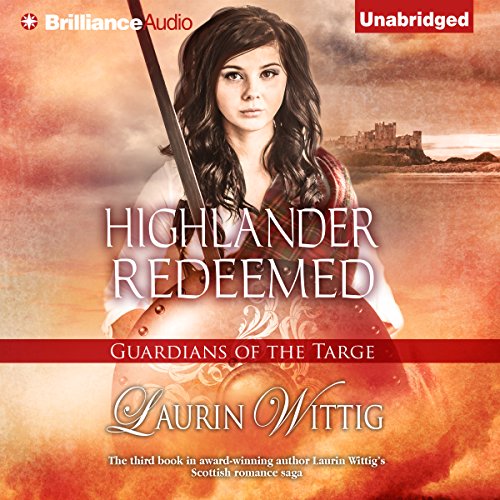 Scotia MacAlpin may be only eighteen years old, but she's no stranger to trouble. Her latest incident - which resulted in a death and forced her clan into battle - has made her an outcast among her exiled people. Scotia is tired of being ignored and overshadowed by her sister, a gifted Guardian of the Targe, and she's become hell-bent on destroying the army out to capture the ancient Highland relic for their English king.

Duncan of Dunlairig has looked out for Scotia since she started to walk. She was as restless and reckless then as she is now - only the stakes have become higher and more perilous. While the rest of Clan MacAlpin ostracizes her, Duncan secretly helps Scotia become the warrior she yearns to be. But the real test of her skills may come when he needs her help - and her long-forgotten heart - in this thrilling and romantic Guardians of the Targe tale.

Best of the trilogy! The development of characters transitioned smoothly culminating into a powerful story of hope and love for a clan. loved it#

I really love this conclusion to a wonderful trilogy. This story explored a myriad of human emotions,and battle strategy. However, the exciting and thrilling twist is a most satisfying conclusion. My thanks and appreciation to narrator Phil Gigante for making each and every character come alive, I was transported into the world of the Guardians themselves. I very highly recommend this book and the whole trilogy.

absolutely have to read this book

Would you consider the audio edition of Highlander Redeemed to be better than the print version?

Didn't realize until closer to the end that the power of three is very evident in this story.

I purchased this book because I love Phil Gigante as a narrator.* And, his performance was fantastic, as usual....but I still couldn't stomach the protagonist, to the point where I didn't finish the last 3 hours of this audiobook. (It takes a lot for me to quit a book without finishing it, but this particular one apparently had what it takes.)

Scotia is a bratty, spoiled, self-centered twit, with, as far as I can tell, neither any redeeming qualities nor desire to get over herself and grow the heck up.** First, ugh. Who wants to listen to a book where you can't stand the main character, and constantly want to smack her? Second, the romance aspect to this book is just plain creepy...Scotia acts like such a child that how can a grown man desire her? It just makes Duncan seem kind of like a pedophile. Ewww.

This was my first foray into Ms. Wittig's work, and based on these characters, whom even my very favorite narrator ever couldn't save, I'm not sure I'll get anything else of hers anytime soon.

*As Mr. Gigante did not narrate the earlier two books, I started with this one. However, I'm not sure I would have liked the first two books in the trilogy either, as the women who were clearly the main characters in those (Rowan and Jeanette) are self-important prigs, at least in this book.

**Full disclosure: I currently have two teenaged daughters, so my tolerance for bratty teenaged girl behavior is admittedly at an all-time low.

Amazing story line could not put down

Each character held her own in this book. Imagination of the writer kept you feeling of excited and joyous all at the same time

The whole series was a very good read. I enjoyed them alot. wished there were more.

Good ending to the trilogy!

It was lovely hearing Scotia's story. I loved the to and fro of her growing pains as she finally woke up and smelled the coffee! Alas poor Duncan and his epic patience. A good entertaining book with lots of action and sound flow to the story. Very enjoyable! Oh, and, Phil Gigante's lady voice? That always cracks me up!