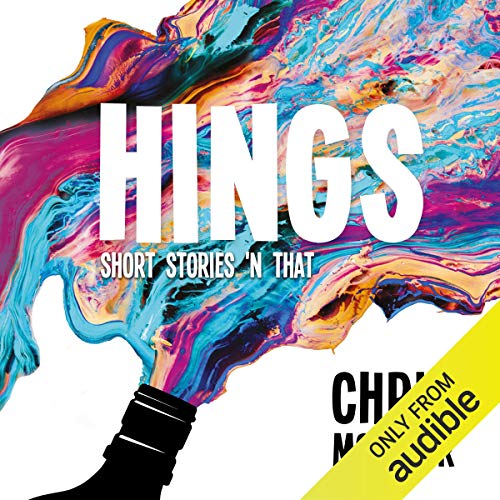 From the streets of working class Scotland and, on occasion, a little beyond our solar system comes one of the country's most hilarious debut writers.

Putting surreal and witty twists on the everyday, Chris McQueer creates recognisable characters you will love and want to avoid like the plague.

Peter's earned his night off, and there's not a bloody chance he's covering Shelley's shift. He just needs to find some pals for the perfect cover story. Deek is going to be at the forefront of the outsider art movement and do Banksy proud. Davie loves tattoos, and his latest is going to be a masterpiece. Tam is one of the most creative minds in the galaxy (apparently), but creating parallel universes can cause problems.

Everybody on Earth wakes up with their knees on backwards. He caught folks' imagination on Medium with his stories and had rooms howling with laughter on the spoken word circuit, and now it's time to put Chris McQueer on the page. Are you ready?

What listeners say about Hings

i had a blast listening, f*cking hilarious and fun all around~
highly recommend it <3

'If ah wanted to hear an arsehole talk ah'duv farted' will stay will me forever. Genius

These hings are great.

I loved these short stories.
Read by the author and so gives more authenticity to each story. I particularly liked "korma polis", but there were so many that made me laugh out loud. To my embarrassment on a train or walking along the road.
Keep up the good work mate.

Runs out of steam quick

The book is delivered well, but the stories run out of steam after maybe 2 or 3. The rest follow similar patterns and feel repeated, with laughs at a minimum. Book was worth trying, but it wasn't for me.

Working class tales of the unexpected