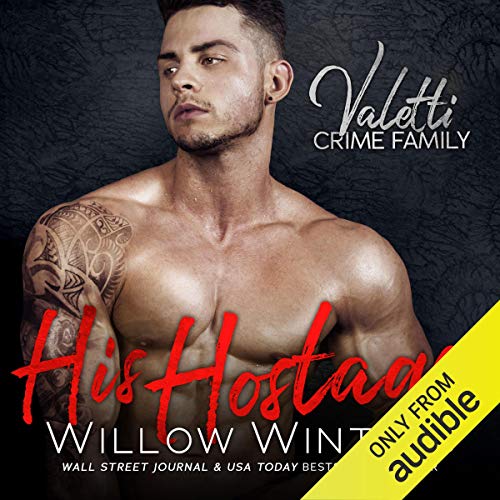 He was supposed to take my life...instead he made me his.

Valetti crime family underboss Vincent Valetti is hot. Like...jaw dropping, lip biting, panty wetting kind of hot. Tall and muscular, with the kind of dominant, cocky attitude that makes a girl's knees go weak. He commands respect and fear from the familia, and he deserves it. He's earned it. As for women...they can have one night and the most amazing f - k of their life, but that's all they get.

Until Elle Hawthorne. Gorgeous, curvy, and looking for an escape, she calls to Vincent. Her innocence begs him to take her...f - k her, ruin her for all other men. Worse, he wants to protect her.

In Vincent's care, Elle witnesses a terrible crime - and if she breathes a word of it, the Valettis are screwed. Torn between the woman he craves and loyalty to his family, Vincent is put to the test.

He should kill her, but he can't let that happen. He won't. Vincent's a man who takes what he wants. And he wants Elle all to himself. She was in the wrong place and at the wrong time. Now she belongs to him. How far will Vincent go to protect the girl who should be next on his hit list?

This is a stand-alone, full-length mafia romance with a filthy-mouthed, possessive bad boy. Guaranteed HEA.

What listeners say about His Hostage

My first book by Willow Winters and I loved it - Vince was such a softie when it came to “his sweetheart”. Can’t wait to listen to the other books on this series !

I read this book by Willow Winters before I listened to it. I loved the audiobook more than the e-book because the narration was so good. I enjoyed getting into the minds of the characters, and Lance Greenfield and Samantha Prescott were able to give so much emotion to their performance. This book is part of a series (2nd out of 5) and is a standalone listen. The same extended family is part of the series, with highlights and updates on other couples. This book focuses on Elle and Vince. (Dom and Becca are briefly mentioned -- they were focused in Dirty Dom -- also on Audible). I was fortunate enough to listen to this book all at once, and it was so good! My review is not a synopsis of the book, but rather my opinion of it! I was given this free review copy audiobook at my request and have voluntarily left this review.

Now this is a Mob Romance! Vincent and Ell's story is rougher and more to the mob point but so excellent. I smiled through the whole book because I love listening to these characters more than reading them. You will enjoy this series.

HE HAS TO HAVE HER

In this episode we see Vince & Elle having to have each other when Elle's at their restaurant when Elle his there to get away from her drunk of a mother who has made her to move back home so she can pay for the house that's in her name, but now she's going to have to give up her studies.
Forget about that Vince see's her & have to have her as she does he but he can't have her all the way, not back in his office at the back, so she runs & this is where her life changes, when she see's what she shouldn't. And the mafia CAN'T LET anyone live to tell the tale...that is unless they're part of the familia & for some unbeknown reason he CAN'T let anything happen to have her, HE HAS TO HAVE HER & this is where we see THE ACTION & WHAT ACTION THERE IS WHERE IT COMES TO THE BEDROOM ACTION 😉😉😉

The dual narration prologue was a bit jarring because the breaks were a bit long but once it got into duet the story flowed smoothly.
Loved this hot, so hot, and danger filled mafia romance. I think this is one of very few books where I feel bad for the h 😔 poor girl can't get a break!

This story had such possibilities .... I fall in the minority but this story was just not for me. I bought this on sale for 1.99 and have to say it was such a waste of money.

Loved this book! The sexy times are HOT and the love story is nonstop exciting! I love how Elle it's accepted into Vince's familia too, it really adds a heartwarming element. Really recommend!

I really enjoyed this audiobook the story was great. The characters were over the top. in a good way! The narrator's, Lance Greenfield and Samantha Prescott did a fabulous job of bringing this to life. I look forward to many more. ...Willow, thank you for all your great works!

This series is a interesting read. Most may not like it bt i do. Its worth a credit. I listened 2 Doms story and Vince. Now imma download part 3 n from the lil intro story its gonna b goodddd!!

Lance Greenfield and Samantha Prescott really brought the characters to life. Willow Winters have ruined me and brought me to the dark side and there is no turning back.

Loved this one. Super easy to listen to and a great one for the journey to work.

Book two in this series was just as good as book one , the narrators as usual were perfect.

Nobody does a good Mafia book full of mystery and seduction quite like Willow Winters. Awesome story with awesome characters and even better narration. It was the total package.

Mafia romance amongst the families

Would you consider the audio edition of His Hostage to be better than the print version?

Didn't read the story just audio and it did take a little minute to listen nderstand how it linked but once it did I enjoyed the story.

I feel sorry for Vince he has the patience of a saint with his family and obviously loves them. He has the good sense to see the value in others.

The scene where Ava gets here own back and smashes his face she frees herself in away!