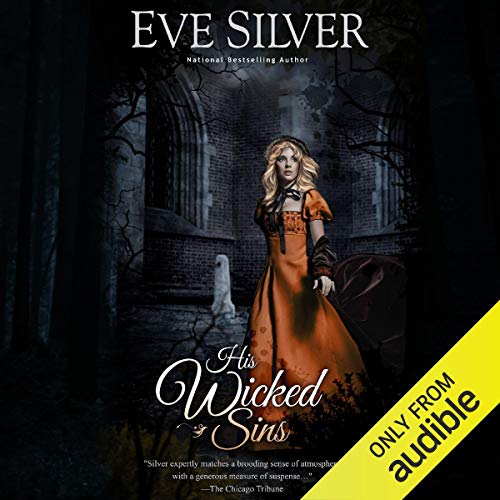 If you love historical romantic suspense with a Gothic vibe, don't miss this thrilling listen!

His Wicked Sins is a stand-alone story. The Dark Gothic series can be listened to in any order!

Determined to help her impoverished family, Elizabeth Canham accepts a position at Burndale Academy, an isolated girl's school filled with secrets and shadows. There she meets mysterious widower Griffin Fairfax, a man dogged by dark rumors, a man who both frightens and fascinates her.

But Beth has secrets of her own, nightmares that haunt her and fears that follow her into the light of day when a woman is found dead in the nearby woods - the victim of a brutal murder...a murder that bears terrifying similarity to others.

Then Beth discovers all the victims were intimately connected to Griffin. Beth’s past has taught her to be wary, but her heart tells her Griffin cannot be the charming, seductive killer stalking the night, stealing women’s hearts...and lives.

"Silver expertly matches a brooding sense of atmosphere with a generous measure of suspense...." (Chicago Tribune)

What listeners say about His Wicked Sins

The plot is well written, bringing all to a wonderous conclusion.

The author is well talented in the gothic prose.
Although at times a bit long and tedious in words. Making a thought repetitive and extra long in sentences. Plot and story line was entralling.

One thing I did notice about this authors knowledge of this time period, is the true desolation and utter hopelessness and lack of choices in this time.

Women with few choices and horrific outcomes when tradegy does strike a family, especially women in this era.

In her previous books #1,3,4, and five - the practices of blood letting and the truly lack of cleanliness of physician practices are apalling!
Doctors in this time practiced ridiculous treatments to get rid of ill humors affecting the bodies and mind.
Medical practices back then was based on torture.

This time period treated women horribly and it's truly depressing that they managed to survive at all, with no rights.

I am pleased modern medicine has progressed beyond superstition and ill based facts.I

Thanks for a dark gothic story!
Also narration was done brilliantly! 5 stars!!

Eve Silver has a gift for sweeping the reader up into an enthralling story with intriguing characters. Main characters deal with their individual tragedies in their own ways, while their disparate journeys weave in and out between their respective dramas. The eventual surprises, that bring strangers together to seek their answers, make this plot pure fun for readers. Lucy Scott's performance is a masterful delight. Some mature content and murders with a few bloody details.

This is a very well written, what I would consider a book that fits into a few genes (mystery, suspense, love story). It very easily kept my attention throughout and “who dun it”isn’t revealed until the very end, keeping one in suspense and wondering throughout. Listening to how the killer likes to stalk, choose, torture, kill and then keep as trophies.

The story is sad with a lot of suffering and loss (not from the killer). The main characters are Beth a woman who holds much fear in her and is afraid of the dark, being confined in small places, has panic attacks she’s learned to for the most part, hide. She’s traveling to a new job as a teacher. Then there’s Griffin a man with his own secrets and rumors running wild about him. He’s not a man to be trifled with, he’s has an air of danger and darkness about him.

They meet, when Griffin arrives to pick Beth up after her long journey to her new job. During everything that is going on during the story, they become close, seeing a lot of themselves in each other. Then Beth finds out that the little girl, who reminds her of herself when she was young, is Griffins daughter. A girl who stays to herself, doesn’t talk, nor participate and is teased by the other students. A girl Beth is taken by, but can she make a difference in the child?

There’s a lot of different facets going on and overlapping at the same time. A great story that unravels before your eyes. There is beauty and ugliness in this story, but we have to take the good with the bad in life. It’s a story with grit, rot and disgusting, along with beauty, acceptance and trust. Of course ending with lots of love. This was book one, which I guess you could stop after, I will be reading on.

Too many Character Viewpoints

Unlike the other books in this series, this book has so many different character viewpoints. the first 4 chapters are in the perspective of a different person, each time and it's near impossible to keep track of all the different things happening. It starts with the perspective of a police officer at an inn, investigating some murders. Then it switches to a maid cleaning chamber pots, and visiting a lover. Then it switches to a girl in a carriage on the way to a teaching position. Then again it switches to the murderer and his thoughts at his home. There are too many character viewpoints in too many different locations right off the bat, with nothing to connect them together, and it's too much to keep track of.
I wish this book were more like the others before this book in the series.

Too gory for romance genre

I listened to other titles in this series as part of the Audio Escapes, but this one is more gory than I can handle. I like a good murder mystery, but this is more like Patricia Cornwell than Agatha Christie, which is what I would expect to be coupled with a romance story. This is too gruesome for me to be in the romance genre, especially when they start giving the first person perspective of a serial killer and details about what is done to the victim.

This one annoyed me.

Not a great fan of this one. It was monotonous with a heroine that she tried to write without her having a spine of jellyfish but fell short anyway. I just didn't feel it. The mystery wasn't as built as it should have been either.

I enjoyed the suspense and mystery. Loved the characters and narrator does a great job of bringing them to life.