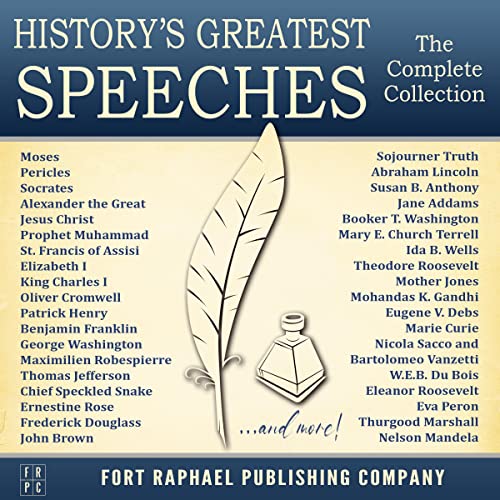 The most profound and important speeches ever delivered are here collected in this anthology, featuring some of the most influential figures in world history. From ancient times to the American Revolution, from the days before slaves had been emancipated (or women had the vote) to as recently as this past century, Fort Raphael Publishing has gathered some of the most important and iconic speeches ever delivered and presents them here - with a biographical background for each speaker - in this complete collection.

This unique treasury of orations features all of the speeches from Volume One to Six of this series, each speech performed by the finest actors in America and each featuring immersive sound - including music and sound effects - to make the listener feel as if they were present when these speeches were first delivered.

This collection of powerful and moving speeches pays tribute to these great orators and to the words they used to inspire millions.

This is the final volume in this series.

What listeners say about History's Greatest Speeches - The Complete Collection