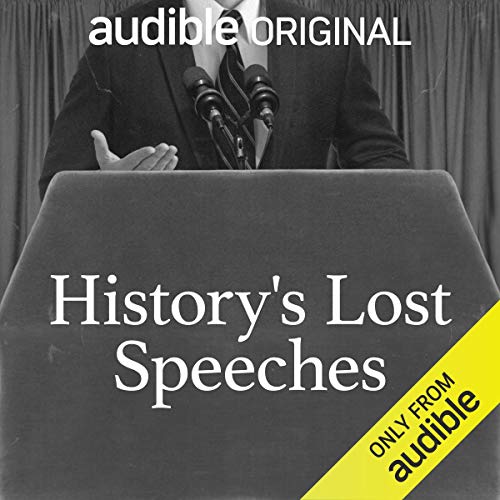 A five part series exploring how the story of Western ideology may have unfolded differently in the 20th Century, based on the undelivered speeches of world leaders. Features academics, writers and historians talking to presenter Professor Suzannah Lipscomb.

Tracking through the 20th century, from the Western heroic rhetoric borne of Allied success in the D-Day Landings, all the way to Britain's present day relationship with Europe, we'll explore the fragile balance of power, nuclear armament, warfare, heroic narratives and the spread of democratic protest throughout the world.

This is an Audible Original Podcast. Free for members. You can download all 5 episodes to your Library now.

Not as expected, stort and narration weak nothing intresting.Need much more improvement and need to quote best examples

The stories cut across domains of science Sci FI and politics. Well presented by Audible

Loved it as it was Interesting to know history behind lost speeches from world over.

Interesting and enjoyable, asking What if...

I hope another series of this podcast will be commissioned because it's very interesting and enjoyable to speculate about what might have been different has key historical events happened differently. Of course we can never know, but it's fun to wonder and explore the role of significant events in the self images of various nations. Reminds you that nothing is guaranteed, that the fates of millions can hinge on events, on luck. I wonder how future generations will think about the decisions we make now.

As a non-professional history buff, who lived through 4 of the 5 chapters discussed by the author, all I can say is "what happened ,happened ".
It was interesting to hear the alternative speeches.
Unfortunately , I won't be around in 30 years time to listen to Brexit and Corona virus discussed in a similar vein by future historians.
If you are under 40, do download and listen.

Interesting and thought provoking. Listening to Episode 4 took me back to almost forgotten feelings and fears of the 1980s, while Episode 1 in particular, made me realise that every moment, for good or bad, pivots before committing us all. An enjoyable listen.

Stumbled across these short podcasts. Thought provoking and insightful looks at key moments in modern history. Would could have happened?

thinking of what, may have been?

really enjoyed the series as it made you think of the "what it question" ...

Thought provoking, well reasoned, clearly presented accounts of what might have happened if democratic history had taken a different path.

I was a really good story line but a lot of the professors mumbled and didn’t speak clearly. I would recommend this to people because they was lots of great stuff in it

Wish it was a bit longer

An amazing podcast, just wished it was a bit longer.
A different perspective to the most dramtic events that changed history. A question which I never asked... What was the pre prepared speech for such an event! What was the alternative speech if such a mission failed?
Its an eye opener and it provokes your brain to think deeper.

Will definitely recommend it, my 5 star for this month.

I couldn't get enough of this amazing series. It was thoroughly engaging and beautifully researched and delivered.

I listened to the moon landing speech three times!

I enjoyed this thought provoking series. While I tend to disagree with regard to the conjecture concerning what JFK might have done with regard to the Vietnam issue, the information confirmed my own view that his focus was to end the Cold War - and what a different world it would have been. Other episodes were informative and well researched.

This covered an interesting array of events which could have changed many lives around the world.

Professor Suzannah Lipscomb really makes you see how things may have been and thetefore it makes you look more closely at todays society.

Wow great selection of the events that change the world.

how it all could have been so different.

Just brilliant and so insightful. A thought provoking series that highlights speeches I never knew existed. A must listen for anyone into history and world events.

Thoroughly enjoyable and on many points enlightening. Always important to hear events and views from another angle.