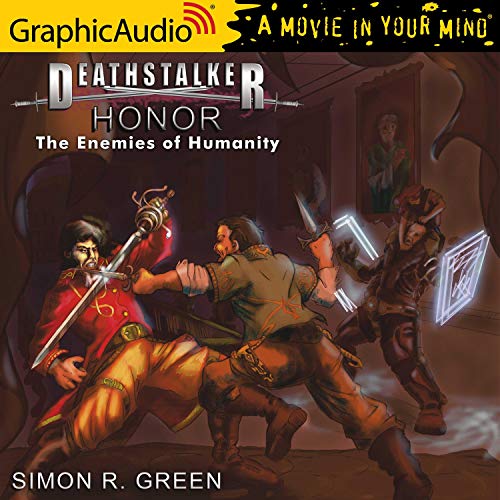 After the dust settles from the Great Rebellion, Owen Deathstalker and Hazel D’ark find themselves working as bounty hunters for the tentative new democratic government, chasing down war criminals from the old empire, while still struggling with the nature of their mysterious powers derived from the enigmatic Madness Maze. Their mission is to capture the most notorious villain of all, the grinning psychopath Valentine Wolfe. The Deathstalker has bloody revenge in mind, but his flamboyantly insane adversary eagerly awaits Owen’s arrival, for Valentine has planned a very nasty welcome indeed. Elsewhere, Daniel Wolfe, the youngest son of the nefarious Clan of the old empire, has made his escape just before the empire fell. On a stolen ship, he watched reports come in of the end of the world he once knew. But Daniel’s only concern is to find the mysterious home world of the dreaded Artificial Intelligences known as Shub. For most it would be considered suicide, but for Daniel, it is a rescue mission. Shub has his father, Jacob, in its clutches. Later, on the planet Golgotha, Owen Deathstalker enters into a bargain with a member of Daniel’s family that will change the Deathstalker’s life forever.

What listeners say about Honor (1 of 3) [Dramatized Adaptation]