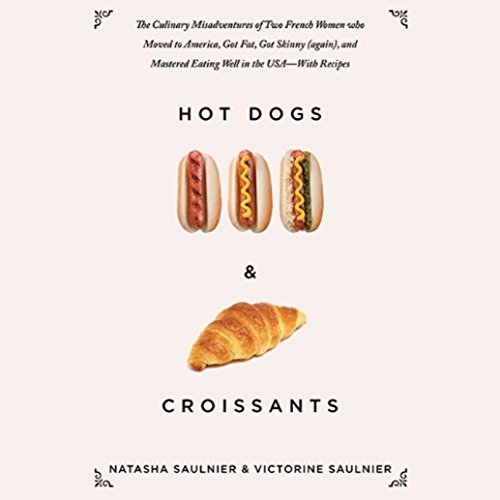 The Culinary Misadventures of Two French Women Who Moved to America, Got Fat, Got Skinny (Again), and Mastered Eating Well in the USA - With Recipes
Written by: Natasha Saulnier, Victorine Saulnier
Narrated by: Tamar Kagan
Length: 8 hrs and 5 mins
Categories: Biographies & Memoirs, Memoirs

When the Saulnier sisters suffer one disappointment too many in their native France, they decide to pack up and try their luck in America. As journalists, they have the run of the country, following stories that take them to places where most Americans have never been - from the back roads of Appalachia to an underground village of homeless people in the New York City subway system. And along the way, they dine on: Nathan's Famous hot dogs at the annual hot dog-eating contest in Coney Island; snapping turtle soup as prepared by the Native American elders of the Alabama-Coushatta tribe; cheesy grits from the Armadillo Diner in Texas; and burgers, burgers, burgers everywhere!

As the Saulnier sisters adopt the American way of eating, their relationship to food shortly changes. They gain weight - and lose their self-esteem. This new diet is especially hard on Victorine, who temporarily abandons her vegetarianism. It's not until they meet a couple running an organic farm in upstate New York that they realize how far they've strayed from their native food values - and learn that you can eat well in America, too.

Save your time- keep searching

It was poorly executed. The book is pretty much about their travels in the US. I'm not sure how this book even got on Audible.

The (very) fake French accent of the narrator does not do any good to this poorly written novel. Added to that, the story is plain and boring, and the main characters irritating. Not recommended.