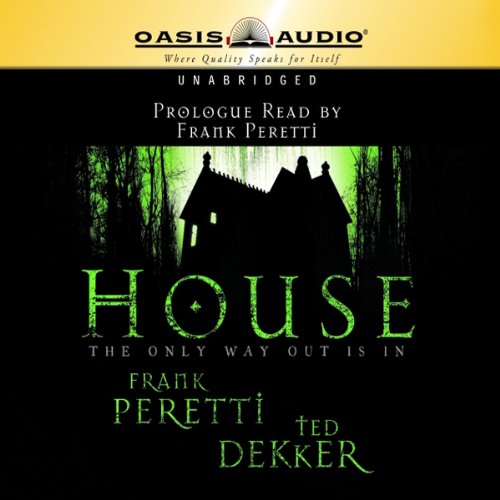 From the minds of multi-million selling suspense authors (Peretti & Dekker) comes House - an epic supernatural thriller that gives a new meaning to the phrase "haunted house." Two couples vacationing in Alabama are pursued by a maniac killer who lures them to a vacant house which won't let them leave. The "house" mirrors their own heart and souls and they must defeat the evil within.
©2007 Ted Dekker and Frank Peretti (P)2009 Oasis Audio
Suspense Classics Horror Thriller & Suspense
Show More Show Less

What listeners say about House

This is one of the best books I have read in a long time. I love suspense and fantasy, but most books ignore God and His mercy. This book combined everything I love to read and also combine it with the miracle of God's love for us, and how He is willing to lead us on the path of forgiveness as long as we are willing to trust and obey Him. The main characters are two couples, all with issues from their past, and their struggle to overcome their personal fears and weaknesses, while struggling to stay alive in a house filled with evil; the worst of all being stalked by a serial killer. This book is gripping and thought-provoking. A must read for every Christian who loves this genre.

I couldn't get through this steaming pile. From start to where I finished it, not one character or event was remotely believable. The story props itself up on Deliverance-esque stereotypes of the American South and a predictable isolated-in-the-remote-house scenario.

It's perfectly obvious that the masked killer stalking them is the Highway Patrolman they met at the beginning of the book. Said killer locks the protagonists in the house and gives them three rules for the so-called "game" he is playing. Rule Number One is "God came to my house and I killed Him". That's not a rule. That's a statement. A rule is a direction, instruction, or procedure that is meant to be followed.

Perhaps this killer is meant to be an idiot with no command of his own language, but I suspect it is the authors who made this error. Everything else in the book is equally stupid and the protagonists are so unsympathetic that you hardly care what happens to them. Also, maybe it's just me, but when I hear someone killed God, I think of Nietzsche and Zarathustra, which isn't scary. Maybe the killer just want to rap about existential philosophy?

The narration is competent, but it's a shame the narrator got saddled with such a crappy book.