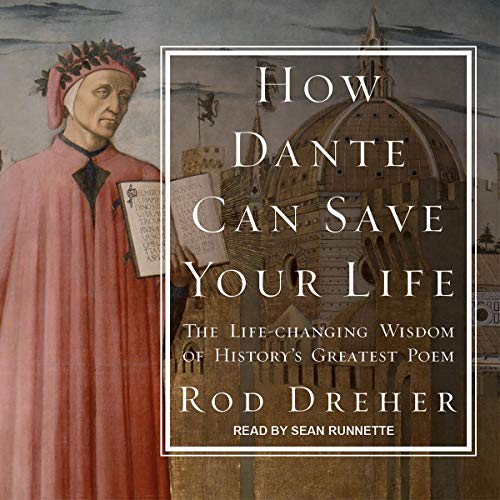 How Dante Can Save Your Life

Following the death of his little sister and the publication of his New York Times best-selling memoir The Little Way of Ruthie Leming, Rod Dreher found himself living in the small community of Starhill, Louisiana, where he grew up. But instead of the fellowship he hoped to find, he discovered that fault lines within his family had deepened. Dreher spiraled into depression and a stress-related autoimmune disease. Doctors told Dreher that if he didn't find inner peace, he would destroy his health. Soon after, he came across The Divine Comedy in a bookstore and was enchanted by its first lines, which seemed to describe his own condition.

In the months that followed, Dante helped Dreher understand the mistakes and mistaken beliefs that had torn him down and showed him that he had the power to change his life. Dreher knows firsthand the solace and strength that can be found in Dante's great work and distills its wisdom for those who are lost in the dark wood of depression, struggling with failure (or success), wrestling with a crisis of faith, alienated from their families or communities, or otherwise enduring the sense of exile that is the human condition.

Inspiring, revelatory, and packed with penetrating spiritual, moral, and psychological insights, How Dante Can Save Your Life is a book for people, both religious and secular, who find themselves searching for meaning and healing. Dante told his patron that he wrote his poem to bring readers from misery to happiness. It worked for Rod Dreher.

Dante saved Rod Dreher's life. And in this audiobook, Dreher shows you how Dante can save yours.

"As a well-written chronicle of choice between the 'success' of big cities and life in the far simpler world of old traditions and deep family ties..." ( Kirkus)

What listeners say about How Dante Can Save Your Life

This book is primarily about the author's lifelong emotional struggles with his family, and only incidentally about Dante. If you are looking for something that will help you understand Dante or renew your appreciation for Dante, this is not your book, though the author does recommend some other resources at the beginning and the end. If you are looking for a book that will help you grow spiritually, I can't understand why anyone would choose Rod Dreher as a guide.

By the way, on the family struggles, my sympathies are with the family.

Dante as Healer and Friend

Where does How Dante Can Save Your Life rank among all the audiobooks you’ve listened to so far?

This book is read by someone who sounds very similar to the author and that makes is so easy to assimilate. The account is very compelling.

What was one of the most memorable moments of How Dante Can Save Your Life?

The author explains the moment his life course changed forever: At 14 he had tried so hard to please his parent, but his parent was blind to the sensitive nature of the son. Without foreseeing the damage, an epithet is used that was considered innocuous but because of the grief of the moment and the stress of trying so hard to be pleasing, it was a sharp barb that stuck deeper than all could have predicted.

Which character – as performed by Sean Runnette – was your favorite?

This is a memoir so there aren't "characters", other than that of Dante and his book as its being used to change the life of the author. So my favorite is the author. His story is compelling and I recognize the struggles he had growing up in the South because I am from the South.

It did make me cry and empathize. If anyone has every been misunderstood by their parents or picked on because they don't fit in with their surroundings, they will love this book. Or if you just enjoy observing human nature and the power of transformation in a person's life.

The book is so well written, so well constructed. You will get an education on Dante, his grand poe, and an experience on human nature and the power of transformation. It is not hard to follow, but sometimes you will want to stop what you are doing to write down what you just heard, it is so well said, so poignant, so wise and touching. I loved this book, and I loved specifically listening to it.

Personal stories with which I could identify. Good book for before or after reading Dante.

Exactly the way Dante would want his poem used.

Mr Dreher uses his own personal struggles to demonstrate how the lessons of The Divine Comedy can be applied in our contemporary world in order to find healing. This is more autobiographical than I expected but since everyone's life journey is unique it is necessary. Instead of trying to survey all the world's self destructive neuroses he focuses intently on one, his own (or more accurately his own little collection). This he can address with absolute authority. But the depth he delves allows us to draw paralles to our own lives. I think Dante would be very pleased to see his work explained for the purpose of saving people from The Dark Wood, and not just admired as some ancient museum artifact kept behind glass.

I thought he was going to tell me an objective, secular story about Dante. Then he went to a cathedral in Chartres and could just feel the divine presence of the Lord thy God.

Thanks, but no thanks. There's a reason this was sold at a bargain-basement price.

Loved it. Great practical advice and reminds us about all that matters: Father, Son & Holy Spirit!

An Orthodox Christian Book for All

From the title of this book one might assume it is coming from a Roman Catholic perspective. Actually it comes from the perspective of Eastern Orthodox Christianity. I would say, after listening to this book (with warm, articulate narration) that Rod experienced his healing due to a combination of the rich and powerful, timeless symbolism of Dante, and the therapeutic tradition of the Orthodox Life. The Tradition we receive, as Orthodox Christians is one where the Church is seen as a hospital where one goes to receive healing. Roman tradition evolved to see itself as Church as a moral guide and judge (that is simplifying things a lot I know, for the sake of brevity).

As an Orthodox Christian also suffering with autoimmune illness and Chronic Fatigue Syndrome this was a wonderful overview of what the Comedia could offer me and gives me the courage and guidance to jump into it's healing waters for myself.

Thank you Rod, for sharing your personal struggles with us so that we too may move towards healing.

I suppose I should have expected a religious conversion considering the title, and I did bear witness to the author’s personal transformation. But i was not inspired to experience my own. Reading this, I felt as if I was in the presence of someone sobbing at my Father’s funeral; it was a curiosity but didn’t help me work through my own grief.

I struggled with his harsh judgment of others, especially his parents. Being a grandparent, I see his criticisms in a different light. Parents do the best they can and of course we all fall short. I would hope my own children cut me a bit of slack and take responsibility for their issues. I struggle to sort out my choices and the impact of my nuclear family; I a person in my own right.

I sped the book to 1.25 halfway through, just wanting to be done with it. I was tired of listening to the reader’s whining voice. Seriously! Grow up.

I would have liked more of the poem. I read this to introduce myself to “The Divine Comedy” from a fleshed out perspective. I did not expect the story to be about trading one black and white vision of the world for another. I am sorry if this sounds unfair. I am moving on to C.S. Lewis’s Novel, “Til We Have Faces”.

The author makes wonderful insights on his life and from Dante's works however he fails to connect the source of Dante's work to the Scriptures. He has a high view of Dante and a low view of Scripture and the power of the word of God. Overall I enjoyed the book not one must keep God's word as the true source of truth and beauty. Psalm 19 is a poem that points you to Christ is where true insight, beauty and transformative power is found. Thanks you for sharing your story Rod. I grew up in that part of the country and I identify with all that you have wrestled with in life.

i almost nevwr give fives.

I didn't like the tone and couldn't finish. Sounded spoilt I couldn't empathize with the author.