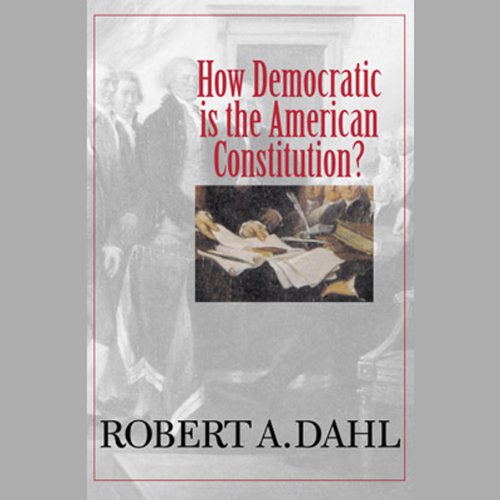 How Democratic Is the American Constitution?

In this fascinating book, the author begins by looking at the ways in which the framers of our Constitution were hampered in their work. They could not know about developments in democratic procedures that hadn't yet been devised, and they had no model of the democracy they were attempting to structure, which could have guided them in their deliberations.

The Constitution written by these talented but fallible men is seen by many as a sacred icon, but Robert A. Dahl examines what have turned out to be some of its less democratic features. He compares the functioning of our country with that of other advanced democracies who do some things quite differently and possibly more democratically.

What can we learn from them and do we want to adopt some of the measures that make these other democracies often work so well? Changes have been made in our Constitution since 1787. It can be altered and has been many times. For example, when citizens became convinced that slavery should not be allowed to continue, the Constitution was amended to repeal it. When 50 percent of the population, women, were recognized as citizens who deserved equality, they were given the franchise.

Dahl wonders if other important changes in our national document are possible. Could changes in the unequal representation of two senators from every state, regardless of population, ever win approval in the Senate or enough popular support in the small states to result in an amendment that required the number of senators in each state to reflect the population of that state? Or could we alter the way in which our presidents are selected by an electoral college, resulting in several elections, including that of 2000, in which presidents have been chosen who did not win a majority of popular votes?

The author discusses the likelihood of success in making the changes just mentioned, and suggests that short of that, there are helpful alterations that could be made in the "unwritten" constitution.

"Robert A. Dahl...is about as covered in honors as a scholar can be.... He knows what he is talking about. And he thinks that the Constitution has something the matter with it." (Hendrik Hertzberg, The New Yorker)

I found the narrator to be a bit flat and distracting. You could often hear the wetness in her mouth and it was very difficult to ignore.

Painful to read. I have read this book over 4 times and all times it was hard to keep up.