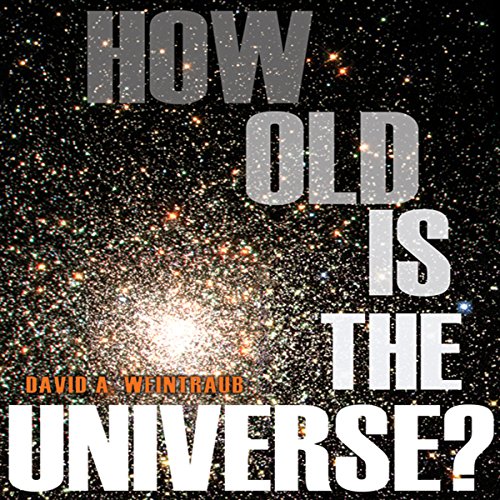 How Old Is the Universe?

Astronomers have determined that our universe is 13.7 billion years old. How exactly did they come to this precise conclusion? How Old Is the Universe? tells the incredible story of how astronomers solved one of the most compelling mysteries in science and, along the way, introduces listeners to fundamental concepts and cutting-edge advances in modern astronomy.

The age of our universe poses a deceptively simple question, and its answer carries profound implications for science, religion, and philosophy. David Weintraub traces the centuries-old quest by astronomers to fathom the secrets of the nighttime sky. Describing the achievements of the visionaries whose discoveries collectively unveiled a fundamental mystery, he shows how many independent lines of inquiry and much painstakingly gathered evidence, when fitted together like pieces in a cosmic puzzle, led to the long-sought answer. Astronomers don't believe the universe is 13.7 billion years old - they know it. You will too after listening to this book.

By focusing on one of the most crucial questions about the universe and challenging readers to understand the answer, Weintraub familiarizes listeners with the ideas and phenomena at the heart of modern astronomy, including red giants and white dwarfs, cepheid variable stars and supernovae, clusters of galaxies, gravitational lensing, dark matter, dark energy and the accelerating universe - and much more.

Offering a unique historical approach to astronomy, How Old Is the Universe? sheds light on the inner workings of scientific inquiry and reveals how astronomers grapple with deep questions about the physical nature of our universe.

The worst-read audiobook I've ever listened to.

What would have made How Old Is the Universe? better?

Has How Old Is the Universe? turned you off from other books in this genre?

No, but I will think twice about buying anything else published by Audible

This has been an extremely frustrating book to listen to. The narrator's cadence is EXTREMELY unnatural. He sounds like he has to pause to flip a page in the middle of a sentence — EVERY sentence. I truly believe a computer would have done a better job of narrating this book.

I've listened to dozens of audiobooks over the past 12 years, and this was the worst performance I've ever endured.

This is an excellent book summarizing the history of cosmology, particularly the age of the universe. Unfortunately, the reader is terrible. He reads as if he is late for an appointment and just wants to get to the end. Also, he clearly spent no time learning how to pronounce names and words that are well known amongst astronomers.

What other book might you compare How Old Is the Universe? to and why?

I recommend an interested reader try Cosmology: A Very Short History. It's a bit dense, but it is at least listenable.

I didn't like any aspect of Brad Smith's performance. His reading was rushed and was like listening to a jack-hammer. I have listened to hundreds of audiobooks, and I think he rates as one of the worst readers I have ever come across.

Did How Old Is the Universe? inspire you to do anything?

Listen to other relevant audiobooks with a better reader.

It would be great if this book could be re-recorded with a different reader. It is simply unlistenable right now.

It starts with the basics & then the fantastic

Surely sometimes it is all beyond my comprehension but I still find it all so fascinating. That us humans have the mind and the curiosity to sit down and figure all this out. Thousands of people with their different skills in imagination, mathematics, logic and more have been drawn to try to make sense of what it is we see when we look up into the sky, day or night. I look up and I am in awe mostly. Though now after reading this book the awe is both what I see and now what I know. The story is very well told and so much information is packed into this one book. It is all so amazing. This is also a book I will and have already listen to over and over again. Each time I seem to understand more.

What other book might you compare How Old Is the Universe? to and why?

This is another great book which to me brings Einstein's genius to light so much so you are amazed that the human race was able to bring into existence such a brilliant thinker. What a special gift he was to all of us. (Though this is a personal comment and is not in the book, to think that the ignorance and hate of Nazi Germany would have killed a man such as Einstein is to me a terrible thought.)

What does Brad Smith bring to the story that you wouldn’t experience if you just read the book?

He is amazing with his narration. His tone is fairly neutral and he is able to present some very complicated ideas in a voice that makes you almost see it. It is somewhat of a long book over 10 hours and if his reading wasn't just perfect it would have ruined the experience, but of course just the opposite happens. Though not everyone agrees with me, and maybe it is my laziness, but I so enjoy lying on my bed in comfort and be able to just listen to such wonderful writings as done by the author and read by Brad Smith. Truly a joy of our modern day society. I find this so with audio. I believe it allows for my "self" to relax and take in what it being said in a way reading the book or watching a video doesn't allow to happen. I can just float in my imagination and enjoy!

In a sense surely one has a certain feeling of joy when you hear of someone's success after so great an effort and then of course the opposite happens when you see a great effort and focus on finding a solution and failure is the end result. Even worse is finding a solution and have your fellow humans punish you for being brilliant. Surely science history is man at his best trying to understand and make sense of what he/she is experiencing. Another good reason to listen to the book for it not only helps you learn it also helps you experience the greatness of humans at trying to satisfy our curiosity.

I strongly suggest you download the PDF that comes with the book. It has many drawings that make what the point that the author is trying to make easier to comprehend. There are also many interesting pictures that I found helpful and inspiring.