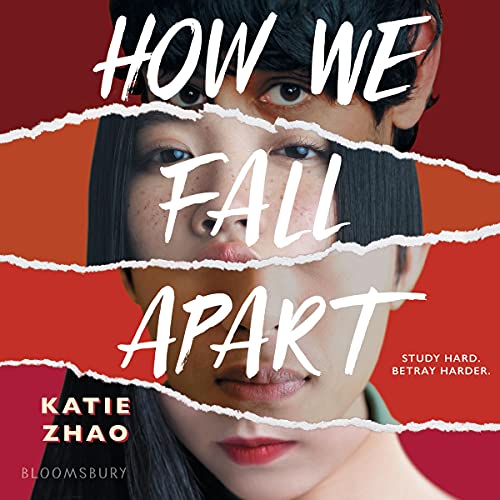 How We Fall Apart

Bloomsbury presents How We Fall Apart by Katie Zhao, read by Natalie Naudus.

In a young adult thriller that is Crazy Rich Asians meets One of Us Is Lying, students at an elite prep school are forced to confront their secrets when their ex-best friend turns up dead.

Nancy Luo is shocked when her former best friend, Jamie Ruan, top-ranked junior at Sinclair Prep, goes missing and then is found dead. Nancy is even more shocked when word starts to spread that she and her friends - Krystal, Akil and Alexander - are the prime suspects, thanks to 'the Proctor', someone anonymously incriminating them via the school’s social media app.

They all used to be Jamie’s closest friends and she knew each of their deepest, darkest secrets. Now, somehow the Proctor knows them, too. The four must uncover the true killer before the Proctor exposes more than they can bear and costs them more than they can afford, like Nancy’s full scholarship. Soon, Nancy suspects that her friends may be keeping secrets from her, too.

Katie Zhao’s young-adult debut is an edge-of-your-seat drama set in the pressure-cooker world of academics and image at Sinclair Prep, where the past threatens the future these teens have carefully crafted for themselves. How We Fall Apart is the irresistible, addictive, Asian American recast of Gossip Girl that we’ve all been waiting for.

"A delicious shock on every page. Zhao has written a modern Gossip Girl for the BIPOC set that serves up urgent insights on class, race, and the brutality of high school striving." (Stephan Lee, author of K-Pop Confidential)

"Through the eyes of her fierce, determined and morally grey protagonist, Zhao unflinchingly exposes the pressures of elite high schools. This juicy thriller is steeped in secrets, betrayal and toxic competitiveness - you won’t be able to put it down." (Diana Urban, author of All Your Twisted Secrets)

"Dark, deceptive and deliciously deadly, How We Fall Apart cuts to the core of the Asian American experience through a fast-paced, twisty academia thriller." (Amélie Wen Zhao, author of the Blood Heir trilogy)

What listeners say about How We Fall Apart

This was amazing!!! The story, characters, and the pace was really good. I know some people have compared this to Pretty Little Liars, but I have to disagree. In the beginning I was thinking the same thing, honestly I tried to read PPL and sorry to say that I found it boring…there I said it; I only watched the television series, and even that got irritating too. This on the other hand was so good, can’t wait for the next book. And, those people that say “oh, it was predictable, and I guessed who the proctor was from the beginning”, they are lying, because even when it was revealed I still was going “It’s who?”, I don’t even remember that person”. But, to each their own, take a chance on this one, I don’t think you will be disappointed. The narrator was also amazing, I can’t leave her out of the praise, because a bad narrator can make or break an audible book, for me at least.

I listened to the entire book. It was filled with stereotypes and went over the same ground again and again. And it ended poorly. Very disappointed.

Great characters and thrilling throughout!

The character and interactions in the whodunit style story were done very well! The plot twist I didn't see coming either so that added some extra intrigue once that was revealed. Definitely a recommend for anyone that like young adult mysteries and thrillers that are a bit darker especially in human nature terms.

HOW WE FALL APART is a delicious story about Jamie, a murdered high achieving rich girl and the frenemies suspected of killing her. Narrated by scholarship student Nancy, who was always second yo Jamie who’s mom was one of Jamie’s maids, readers learn about the depths these rich kids will go to be the best and please their parents.

Katie Zhou’s crisp, tension-filled writing makes HOW WE FALL APART a very readable mystery and psychological thriller (not a thriller-thriller).

Nancy, though sympathetic, was difficult to root for as she made bad decision after bad decision, though at times her heart was in the right place. Most of the characters lacked depth and nuance, not a decent one in the bunch though some had redeeming qualities. Worse than the characters were their parents, willing to forgo their children’s happiness for the American Dream. I know that non-white immigrants have many added stressors and burdens, but I don’t think that ought to make all their parents relentless tyrants without empathy.

A few reasons for me not giving HOW WE FALL APART five stars, as much as I enjoyed the book.

Eric, who graduated two years ago was NOT a teacher or a student teacher at one of the most exclusive schools in the country. One year of college *might* get him a teacher aid job (meaning in the classroom with a real teacher). No school would risk hiring a “teacher” who was classmates with kids still at the school, no matter how rich his parents.

The other part was the school seemed to lack white legacy kids whose ancestors had attended the school since it’s founding. I don’t need white kids in a story, but having a few, even if they were mentions and not actual characters would have made this centuries old school more believable. If Zhou didn’t want go that route, a newer school founded by immigrants that exceeded all the white founded (likely built by slaves) schools would have made more sense to me. I’d never take off a star for a detail like this, it’s just a place my mind kept going.

The experience of reading HOW WE FALL APART was fun and I never lost interest. I hope there’s a second book in what looks like a series.

Chapter 19 and chapter 20 are the same - there's a few times where the audio gets weird.