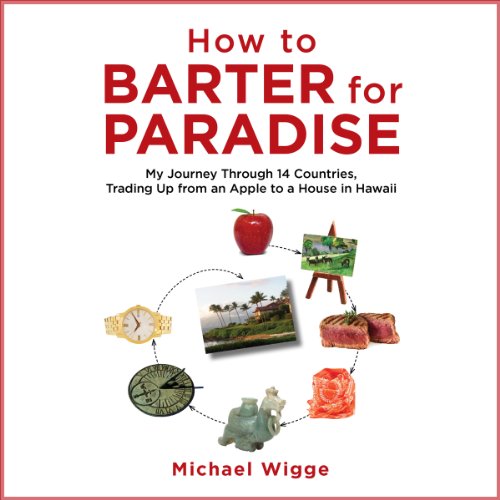 How to Barter for Paradise

My Journey through 14 Countries, Trading Up from an Apple to a House in Hawaii
Written by: Michael Wigge
Narrated by: Chris Sorensen
Length: 6 hrs and 59 mins
Categories: Travel, Essays & Travelogues

Join Wigge on a wild ride as he trades an apple for a house in forty-two steps. Most people like to travel in comfort: they stay in fancy hotels, never leave tourist spots, and stay away from the locals. Michael Wigge isn’t like most people, though.

After travelling the world without money for 150 days while writing How to Travel the World for Free, his next challenge: turn an apple into a house in Hawaii.

Wigge goes around fourteen countries and six continents exchanging goods for more valuable ones, and he meets an array of good-humored people who take his deals. Taking on his Barterman persona, he trades the apple for sixteen cigarettes in Germany; a couple of trades later in India, he fixes up a motorized rickshaw and trades it for silk; in Australia, a millionaire amuses himself by offering him an art piece for the silk if Wigge feeds a wild crocodile.

Finally, he arrives in Hawaii armed with two bicycles, a surfboard, Portuguese porcelain, three solid-gold coins, a Porsche wristwatch, a record by musician Coati Mundi and accompanying contract for 25 percent of the proceeds from his next single, a voucher for a two-night stay in a mansion in L.A., and a piece of original artwork by painter Alex Stenzel - now he just has to find someone to give him a house in exchange.

On the 200-day journey around the world, Wigge makes forty-two trades and meets strange, kind, funny, friendly, eccentric, and good-natured people who help him in his quest. It’s a journey you won’t want to miss!

This book is only possible because the guy had money

Something rooted in a little more reality.

This man makes it sound like he learned how to do something and can teach us all how to barter for a house starting with an apple.

He obviously had money to take on this endeavor or it would never have been possible. The title should read, how to barter your way to paradise if you're well funded already.

I love the concept, and enjoy some of the stories. But it's not the most eloquently written book, and I would have preferred to hear the author narrate.