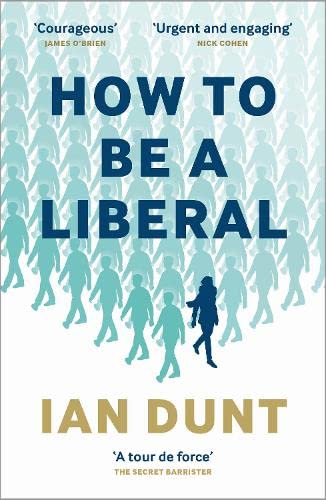 How to Be a Liberal

From Brexit Britain to Trump's America to Orban's Hungary, liberal values are under attack.

In a soaring narrative that stretches from the English Civil War to the 2008 financial crash and the rise of populism, the journalist Ian Dunt tells the epic story of liberalism, from its birth in the fight against absolute monarchy to the modern-day resistance against the new populism.

This book explains the political ideas which underpin the modern world. But it is also something much more than that - it is a rallying cry for those who still believe in freedom and reason.

What listeners say about How to Be a Liberal

Almost Quit Listening, But Glad I Stuck With It

A fantastic audiobook! The author takes you through stories of key notable figures which he believes encapsulate the evolution of liberal thought.

To clarify, this audiobook is by no means a comprehensive history, nor does the actual book itself contain sources apart from the author citing the experts he worked with in the Afterword. So while I can't say you'll get a thorough education on liberalism, you will learn a very engaging summary on how liberal ideas evolved over time. You'll learn about the liberal emphasis on property rights of John Locke to the egalitarian liberalism of John Stuart Mill to the laissez-faire liberalism of Friedrich Hayek to the "liberalism" know today as identity politics.

At times I've stepped away from the "liberal" label, simply because I don't want to be associated with the identity politics "liberal" I see today. Arguably, it shouldn't even be called liberalism! But this audiobook argues there still is a liberalism out there, one which has been unreasonable trashed upon, one which the baby has been thrown out with the bathwater, but if we continue using it it's still the most useful tool we have so all of us can live together and not die together.

Note: The narrator is the author of the book, and he is pretty monotone in his delivery. It doesn't bother me very much, but noting here for anyone who it may.

If you're used to hearing Dunt through his broadcasting, you might be surprised at the tense, measured delivery on display here. As he guides you through the story of liberalism, and the walls it has had to demolish at every blood-stained step on its way to where we are today, you'll get the point of his urgency. It's unfinished business, and it's fragile. It's a work that's clearly been extensively researched and reasoned, but it explains the competing mindsets that are shaping geopolitics today. If you consider yourself a liberal of the centre left or the right, you'll probably end up reassured that you're on the right side, but you'll have a much better idea why that is.

A hugely engaging book that speaks to our moment by placing the contemporary malaise in politics within a broad historical narrative of Liberal thought. A must read!

Magnificent narrative analysis of how Liberalism has evolved. Would highly recommend to anyone trying to make sense of the state we are in!

Not what I was expecting and all the better for it

There's some heavy stuff to get through but not in a bad way. It's almost heartbreaking hearing some of the story of liberalism read in such a normal, steady voice. Thank goodness for the last 20 minutes though - A call to arms for would be liberals all: Confidence and humility. Thanks.

Superb narrative sweep of liberal history and its juxtaposition with the nationalist tendencies that are seeping into everyday discourse.

An absolute joy to listen to, brilliantly narrated by the author.

Highly recommended both as a historical sweep and for its delve into liberalism.

The paragraph on the French Revolution was extremely well told.

Buy this- you won’t regret it!

It’s long, but a fascinating overview of the origins of Liberalism. I particularly enjoyed learning of how its development intersected with economic theory throughout the 20th century and into the 21st; the pull between Hayek and Keynes, the former’s recent dominance causing many of the problems we now face. Most crucially, it’s greatly helped to inform my own thinking.

This book has an interesting premise and and strong argument, although there is nothing particularly novel in its interpretation of history and it is a bit oversimplistic in the binary definitions of "liberalism" and "nationalism" and co-opts historical figures who would not recognise themselves as liberals in the modern sense to the cause. However, an oddly characterless and stilted reading by the author himself lets this audiobook down. I would sooner read it in conventional book form and give the printing presses some work.

Best book I’ve read in a while

Excellent survey of the history of the liberal thought, and implications of the recent complacency and lack of engagement with complexities. Finishes with recommendations of what lies ahead and a compelling call for action to revive the egalitarian liberalism.

Based on a sweeping and fascinating review of the genesis of liberal thought, makes a compelling argument to reject the nationalist garbage of Trump/Johnson and just generally try to become a less comprehensively awful society. French pronunciation in the audio version leaves a little to be desired but overall an excellent read/listen.

I should start by saying that I generally approve of Ian Dunt's work as a journalist, but I was a bit let down by this book. It seems to meander its way through the history of political thought without any particular destination or clear argument to hold it together. Maybe the net was cast a bit too widely...? The first half contains some interesting chapters but most of the second half is a pretty superficial account of the last 15 years - the credit crisis, identity politics, social media - and nothing really new is said about any these subjects as far as I could discern.

The narration tends towards the monotonous and the pronunciation of too many words is mangled - particularly non-English words. That got annoying after a while.

Not an awful book by any means and I learned quite a lot in the first half, but not as good as I'd hoped.

I learned so much in so few hours. I've already started recommending it to friends.

A call to arms

At first I wasn’t sure, the book seemed to be about liberal history. I stayed the course. By the 3/4th chapter I was hooked. Really great summary of liberal thought and a call to arms at the end in the defence of liberal values. Thought provoking.

Dunt has written a monumental history of liberalism and how it developed. He lays out a thorough case for its defence and why, in the form of egalitarian liberalism, it is needed more than ever.

A rallying cry for Liberalism.

A facinating journey through the history of liberalism. Highly recommended (not enough swearing though)

Balanced reflection on history and recent events, serves as a great reminder of the ease with which collective thought propagates..

An important read. Get it absorbed and understood.

I have read and read around many of the historical liberal thinkers. This book pulls it all together in a special way. It gives solid context for the core of liberalism into our current times. Read/listen to it and do better. Thank you Ian.

Required listening for every member of liberal democratic societies. Ian Dunt has ably threaded the history of liberalism and clearly shown its modern challenges.