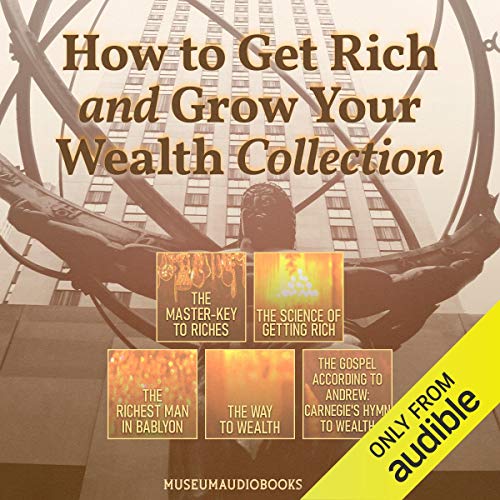 Self-help books, including those on achieving prosperity, have always been popular. They serve as a vast storehouse of inspiration, motivation, and how to use common sense to achieve one’s goals. Many of these are written by life coaches, psychologists, ministers, or other successful people who wish to share their recipe for success.

How to Get Rich and Grow Your Wealth Collection includes classics like:

Book one: The Master-Key to Riches. Based on the Andrew Carnegie formula for money-making, the book describes in step-by-step detail the great practical philosophy of success based on the success experiences of hundreds of the world's most powerful and wealthy men.

Book three: The Richest Man in Bablyon is a 1926 book by George S. Clason that offers financial advice through a collection of parables purported to derive from ancient Babylon. The parables are told by a Babylonian character called Arkad, a poor scribe who became the richest man in Babylon. Included in Arkad's narratives are the "Seven Cures" (on how to generate wealth) and the "Five Laws of Gold" (on how to protect wealth). Crucial components of Arkad's advice are "paying yourself first", "living within your means", "investing in what you know", the importance of "long-term saving", and "home ownership”. The Science of Getting Rich is considered to be a timeless inspirational guide on the subjects of financial planning and prosperity.

Book four: The Way to Wealth, an essay by Benjamin Franklin, is a collection of wisdom sayings and advice published in Poor Richard's Almanac from 1733-1758. These proverbs and sayings are woven into an ethical code advocating industry and frugality as a “way to wealth”, thereby securing personal virtue. It is presented as a speech given by "Father Abraham" to a group of people. Many of the phrases Father Abraham uses continue to be familiar today, such as "There are no gains, without pains", "One today is worth two tomorrows", and "Get what you can, and what you get, hold".

Book five: The Gospel According to Andrew: Carnegie's Hymn to Wealth. In his essay “Wealth”, published in North American Review in 1889, the industrialist Andrew Carnegie argued that individual capitalists were duty bound to play a broader cultural and social role and to improve the world in that way.