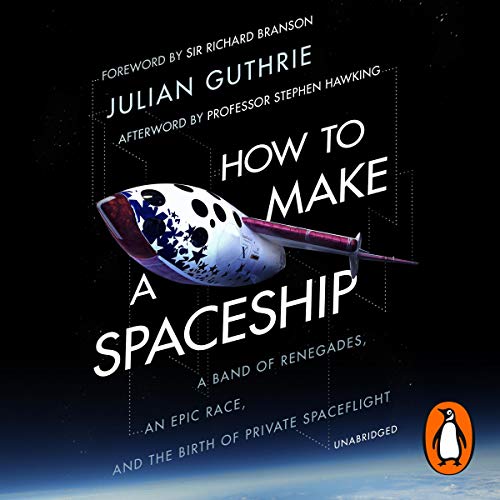 How to Make a Spaceship

The historic race that reawakened the promise of manned spaceflight.

Alone in a Spartan black cockpit, test pilot Mike Melvill rocketed toward space. He had 80 seconds to exceed the speed of sound and begin the climb to a target no civilian pilot had ever reached. He might not make it back alive. If he did he would make history as the world's first commercial astronaut.

The spectacle defied reason, the result of a competition dreamed up by entrepreneur Peter Diamandis, whose vision for a new race to space required small teams to do what only the world's largest governments had done before.

From the age of eight, when he watched Apollo 11 land on the moon, Diamandis' singular goal was to get to space. When he realized NASA was winding down manned space flight, he set out on one of the great entrepreneurial adventure stories of our time. If the government wouldn't send him to space, he would create a private space flight industry himself.

In the 1990s this idea was the stuff of science fiction. Undaunted, Diamandis found inspiration in the golden age of aviation. He discovered that Charles Lindbergh had made his transatlantic flight to win a $25,000 prize. The flight had made Lindbergh the most famous man on earth and galvanized the airline industry. Why, Diamandis thought, couldn't the same be done for space flight?

The story of the bullet-shaped SpaceShipOne and the other teams in the hunt for a $10 million prize is an extraordinary tale of making the impossible possible. In the end, as Diamandis dreamed, the result wasn't just a victory for one team; it was the foundation for a new industry.

What listeners say about How to Make a Spaceship

Making history, Private companies now building and launching their own spaceships incredible story of free business and the race into space enjoyed the book well read

Fascinating journey into the world of private space flight. Informative and insightful I really enjoyed the rocket ride!

Most interesting and quite an amount about Burt Rutan. It certainly shows the difference between the complexity of NASA and these inspired individuals.

This book proves that with a dream, determination, ingenuity and a will to never give up that big things are possible by the underdogs.

I had not realised until listening to this book the significance of the X Prize. What an exciting time this is to be alive where personal space flight for the masses is becoming a reality and it was all created by the hard work, dreams and amazing characters in this book.

I have a new outlook on the future. It has allowed me to realise you should not stop dreaming of big ideas. They are not as far out of your reach as you think.....