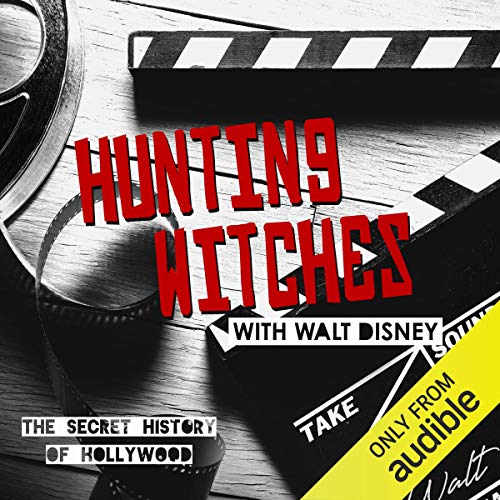 Once upon a time... Hollywood went to war with itself. In the mid-1930s, Communism began to find its way into the film capital of the world, and over the next two decades, it tore the glamorous world of Tinseltown apart. Over four episodes Adam Roche investigates the role of the House Un-American Activities Committee's (HUAC) witch hunt on the careers and output of those in the film industry. As Communist sympathisers are identified and friends turn on friends we hear about how political tendencies affected actors and studios from devastating careers to influencing the films released.

What listeners say about Hunting Witches with Walt Disney

First off I must state from the outset that I am particularly ignorant about Hollywood and this period in US history. It was the name of Walt Disney that attracted me in the first place and boy did I have some childhood illusions shattered! This is a fascinating story set among some of the most famous megastars of the age but including some of the lesser known Tinseltown residents too.

The effect of the paranoia that swept America about the communist threat is a very human tale. The American Government response threw even the American Constitution out of the window in its zeal to out the "reds" leaving a trail of broken lives in its wake. It really is a great example of how far people will go when hysteria grips with even Donald Duck being exploited to make propaganda!

Adam Roche presents excellently and the soundscape is contemporary to the events and very enjoyable in its own right for nostalgia purposes. It all makes a very compelling package and its brevity is well-judged because at the end I still wanted to hear more.

Excellent overview of the injustice of HUMA era.

Plenty of context given from the Hollywood perspective. Highly recommended introduction to an important part of 20th Century history

I loved this series. I didn't know much about the blacklistings before but this series is fascinating and very informative. it's also written in such a way that you feel like it's a story rather than a lecture.

Excellent narration and the story wonderfully told.
You get completely immersed in the era of the 40s and 50s

before listening to this audio series, the whole communist watch hunt was a subject I knew next to nothing about. I'm very grateful for being able to learn a little bit about this dramatic time in the movie industry, my only critique is that you really need to pay close attention to what is going on, nothing something you can listen to in the background

I have only just discovered Adam Roche and his titles (I have them all) I am completely captivated by his delivery and the quality and passion, which is evident by the quality of his narration. He comes across as devoted to his subject and the content detail to all the stories is fantastic. More titles please, I could listen to you all day long.

Superb telling of a dark period of cinema history. Pity this story is so little known. One thing, where can I get details of the incredible period performance of the Internationale - it is amazing, but who is it. I would love to know?

Brilliant in every way.

This is one of those subjects I’ve often heard about in passing but never fully understood. This documentary does a fantastic job of detailing the circumstances which led up to, the drama during and the aftermath of one of America’s most notorious witch hunts. The narration and archive footage are excellent and as someone in their early forties, I now have a number of golden age films I was unaware of that I’m looking forward to watching. Highly recommended!

Couldn’t wait to get drawn into another Adam Roche audiobook after being enthralled with the Warner Bros story.
The title drew me in and description created curiosity. Fascinating the way Roche combines newsreels, facts and characterising names in cinematic history and of the era into human beings with a setting that draws you into the time and place.
History of a time told through people of the time, their choices and consequences of decisions and events. A study of people as well as events.
Big fan of cinema and history and love it when both combined especially when it seeks to bring to life the reality of a moment in time that was real for people living through it, but is a historical time and event for us now. Out of the history book and a living history instead.

held my attention from the first minute. the whole thing was gripping and fascinating. definitely recommend