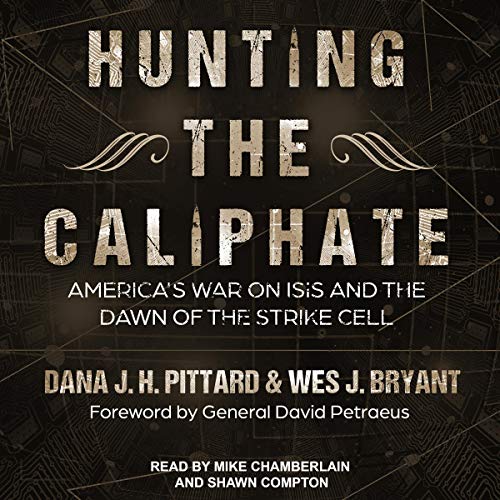 In this vivid first-person narrative, a Special Operations Joint Terminal Attack Controller (JTAC) and his commanding general give fascinating and detailed accounts of America's fight against one of the most barbaric insurgencies the world has ever seen.

In the summer of 2014, three years after America's full troop withdrawal from the Iraq War, President Barack Obama authorized a small task force to push back into Baghdad. Their mission: protect the Iraqi capital and US embassy from a rapidly emerging terrorist threat.

A plague of brutality, that would come to be known as ISIS, had created a foothold in northwest Iraq and northeast Syria. It had declared itself a Caliphate - an independent nation-state administered by an extreme and cruel form of Islamic law - and was spreading like a newly evolved virus. Soon, a massive and devastating US military response had unfolded.

Hear the ground truth on the senior military and political interactions that shaped America's war against ISIS, a war unprecedented in both its methodology and its application of modern military technology.

What listeners say about Hunting the Caliphate

This was the best book I've listened to this year.

I had so many insights in this read, as well as confirmations of some deep held beliefs it is a challenge to organize my thoughts.

First, about the book itself. This is the first book military memoir type book that captures both the Senior Officer's and Senior Non-Commissioned Officer's perspective--(think Sergeants and Generals to the civilians out there) and it was absolutely brilliant. In officer candidate school, one of my TACs said (24 years ago, so probably a bit more my language than his at this point), "Gentlemen, there is a difference between the Commander's and his Senior Non-Com's perspective. It might be summarized best as (Officer) Mission First, Men Always. The NCO's perspective is Men Always, Mission First."

My understanding now, after being an NCO and a Commander is what I would describe as the friction that creates the best Coarse of Action. There are times when my NCO and I would go to the mat about an idea I had--and from that respectful arm-wrestling/wrangling--everything is taken care of with aplomb. The O cannot see everything, nor understand what all his men are feeling (as much as he/she may try), but it is unlikely they have had their PT shorts stolen from the dryer while trying to race out to formation. The NCOs, suffer similar myopias. Just because the Commander isn't doing the actual PMCS on a vehicle, doesn't mean he is loafing. Orders production and MDMP are rigorous, painful planning processes which take as much energy as any physical demands the Soldier may experience.

This book captures some of that friction brilliantly. Wes's frustration and sometimes disdain for the senior officers' decisions are palpable, and understandable--and yet with MG Pittard's perspective one can truly appreciate the immense pressure command truly holds. It breaks many people.

One of the beliefs that was profoundly confirmed in this book is: Character = Leadership. It also confirms the selection of, and training/molding the US Army implements for USMA and promotion to General Officer. I have never met MG Pittard, but after listening to the book I'd follow him straight to hell if needed. It was his character that enabled the coalition (middle Eastern, not our NATO friends) to decide to fight, stop infighting with each other (Iraqi/Kurds for example) and turn the tide against ISIS. His character is also revealed in how he fought for his men in theater with senior officers and politicians to support the fight--and if the decision was still against what he wanted, he saluted and executed. That is Leadership. All good leaders are also able and willing followers.

Wes's (no offense, but I can never remember the AF ranks, and need to get this review done before I forget...) leadership style is indicative of the NCO style. It is more raw. Generally contains a few more f-bombs than the Commander's language--but it is the language of the Soldier. It is real. It is deeply, movingly dedicated to helping his brothers. He loses his shit when he sees his men in danger--to the point of nearly disobeying orders. Those feelings are real and justified.

Lastly, I want to tie this back to some insights this book gave me. Most of it is during the Obama administration, which, in from my perspective was an absolute TRAIN WRECK in foreign policy. To leave Iraq in 2011 was criminally negligent, and cost so many lives by enabling the genesis of ISIS. I felt this while in uniform, and believe it to this day.

HOWEVER, something that occurred to me as my self-righteous indignation began to surface again and again during this listen--I have to remember the economic disaster our country faced; the very, very heated disdain for the Iraq war, and the very real domestic issues our country faced. Wes does a very admirable job of pointing out how Trump's policies were just as inchoate. What occurred to me is the anger I felt towards the Obama Administration may be the same anger other constituencies who may feel unheard and unseen. Obama put those constituents before mine. Who is right? Who is wrong? Both of us.

Get's me back to the friction of a stellar command team, and maybe a thought about how we choose our political leaders. When we first elected the President and Vice President (I think..this is like 5th grade history), the losing candidate became the Vice. Maybe that is how we should choose our leaders.

One side/one man can be 100% wrong all by himself. Totally. However, it is IMPOSSIBLE to be 100% correct without having a respectful, sometimes fractious, friction-filled discussion/arguement about how to move forward. We cannot see/feel/understand everyone's perspective, and these blindspots are dangerous. People get hurt. People get left behind. We need the warrior/hunter to go outside the wire to protect the tribe. This guy isn't ever really thinking about how to equally distribute the spoils. Not that he's evil, he mind is simply focused elsewhere--protection, defense, food. Inside the wire, equally important problems are being solved. How to distribute the tribe's resources, the welfare of the sick or enfeebled. We need both.

There are 33 flavors, but it's all made from milk. We need to get back to the milk.
bsn

Thank you for this book

As a combat veteran of that region, I appreciate the candor of this book. I wore the RANGER tab for 23 years. We need more truth Ike this.

I was Dana Pittard’s intelligence officer for three years. A brilliant human and phenomenal leader. I would follow him anywhere.
Hunting the Caliphate is a great insight in to the strategic, operational, and tactical elements of a complicated conflict.

This is the driest book I've come across. The only people who like the strike cell are war weary old heads and generals that like numbers. this book is murderously dry and makes the TOC sound like the true tip of the spear. what a joke.

It’s always good to take a look at different views of the wars we fight and especially from the people we fight with. This was a great read on the war in Iraq and Syria.

Couldn't put it down. The story moves quickly. The Russians are pretty evil for their bombing campaign focused on killing civilians.