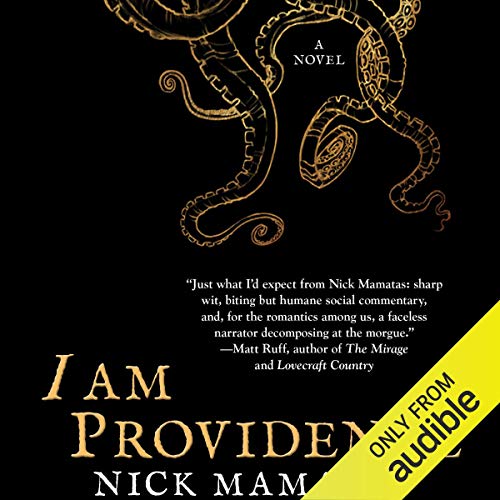 For fans of legendary pulp author H. P. Lovecraft, there is nothing bigger than the annual Providence-based convention called the Summer Tentacular. Horror writer Colleen Danzig doesn't know what to expect when she arrives, but is unsettled to find that among the hob-knobbing between scholars and literary critics are a group of real freaks: book collectors looking for volumes bound in human skin, and true believers claiming the power to summon the Elder God Cthulhu, one of their idol's most horrific fictional creations, before the weekend is out. Colleen's trip spirals into a nightmare when her roommate for the weekend, an obnoxious novelist known as Panossian, turns up dead, his face neatly removed. What's more unsettling is that, in the aftermath of the murder, there is little concern among the convention goers. The Summer Tentacular continues uninterrupted, except by a few bumbling police. Everyone at the convention is a possible suspect, but only Colleen seems to show any interest in solving the murder. So she delves deep into the darkness, where occult truths have been lurking since the beginning of time. A darkness where Panossian is waiting, spending a lot of time thinking about Colleen, narrating a new Lovecraftian tale that could very well spell her doom.

What listeners say about I Am Providence

What a fun read/listen! An interesting murder-mystery that uses some very interesting storytelling techniques. The backdrop (a Lovecraft convention) is quite fun and provides a lot of opportunity for a cool story. Lots of solid knowledge into Lovecraft, the writer and his stories. While not necessarily Lovecraftian itself, this novel is a great homage to his fiction (and him) and an entertaining read overall. Audiobook has two (one actor for each narrator) very good performances as well.

A maddening mixture of, on the one hand, witty satire and sharp observations and, on the other hand, convoluted mystery and flat characters. I think I enjoyed the book, the alternation of live narrator (and Lovecraftian newbie author) and murder victim (established Lovecraftian regular) was a neat conceit, especially the chapters from the newly dead point of view. Having briefly frequented a few anime conventions, the portrait of the Lovecraft convention circuit was believable and sometimes painfully funny (and desperate). The author hits the right notes in making the cast of characters ring true and the petty infighting, awkward social interactions, and sometimes myopic fawning of the community can be cutting. But the driver behind the novel, the murder mystery, sputters and lurches and is just largely unsatisfying. The conclusion felt thrown together and the purposely vague ending was forced. Not entirely wasted time, but not a book I'd easily recommend.

The first convention I ever went to was San Diego Comic Con, right around 1998. It was a huge deal, but you could still buy tickets easily enough and you didn’t have to camp out overnight waiting to get into the panels. But it was enormous, and it was crowded. The second convention I went to was a small SF/F/H literary con also in San Diego, where the panels averaged about 10-20 guests. I remember being shocked to see such a small turn out for some pretty amazing authors.

If you’ve ever been to a similar convention, or if you follow SF/F/H fandom closely, then this book is for you.

The Summer Tentacular convention celebrates the works of H.P. Lovecraft, while the attendees argue with each other about his legacy. As a wordsmith, Lovecraft was terrifying. As a human being, he was a pretty awful racist, and that perspective bled over into some of his fiction. At the Summer Tentacular, we meet our two narrators: up and coming horror author Colleen Danzig and her newly murdered, newly faceless roommate Panossian — who was murdered Panossian during the convention.

Why did someone kill Panossian? Maybe because he had a book bound in human flesh he was looking to sell? Or maybe because he was an asshole? Or…both? The local police are acting a bit weird, so Colleen takes it upon herself to investigate Panossian’s murder among her fellow convention goers, if she can survive the con herself. It sounds like a thriller, and to some extent that’s what it is, but for people who have been following fandom and the field of SF/F/H lately, it’s also pretty hilarious in a dark sort of way. Sad Puppies, convention sexual harassment policies, “fake” fans, the need for diversity in fandom and fiction, internet flame wars segueing into death threats…I mean, as I type this list up, I know in my head these aren’t actually funny — they kind of keep me up at night. But author Nick Mamatas’s portrayal of it all had me cracking up throughout the novel. That’s some kind of dark and delicious magic right there.

It’s impossible for me to talk about this book without talking about Nick Mamatas himself. From the opening chapter, it seems clear that Panossian is a stand-in for Mamatas — which is pretty funny since when we first meet Panossian he’s dead and in morgue, his face recently sliced off. Panossian wrote a cult-favorite Lovecraftian pastiche called The Catcher in Ry’leh (a Catcher in the Rye/Lovecraft mash-up). Mamatas wrote the excellent Move Underground (a Jack Kerouac/Lovecraft mash-up). They both have sharp, witty, angry, and often offensive online personalities which result in a lot of people being pissed off at them. And it’s a lot of fun to see Mamatas mining all of that into his novel to make something both accessible and entertaining.

Joel Richards is great as the dead Panosian, complete with his post-mortal world-weary snark. (A dead author can snark can with the best of them.) That said, Rachel Jacobs does a particularly great reading not only from Colleen’s perspective, but also bringing to life the bizarre cast of characters from the Summer Tentacular. If someone murdered me, I’d hope Jacobs would pounding the convention floor trying to find out who the killer is. (And I’d also hope I could sound as snarky as Richards does, even after I’m dead.)

If you’re a part of SF/F/H fandom, I can’t recommend this book enough. It’s funny and smart, skewering Lovecraft and his culture while celebrating it in the most awkward way possible. I hope we get more like this from Mamatas in the future.

Not what was advertised, and poorly written.

There review/promo that I read for this book made it sound like something magically horrific, in the classic Lovecraftian-sense. The actual presentation is little more then an anixty Twilightesque novel, with a little Sunset Boulevard narration thrown in for half of it.

The actual ending made this utterly disappointing book absolutely unbearable.

There's no story here, just a most annoying busybody set against the backdrop of a low budget "Lovecraftian" convention.

kept my attention until the end. dual narrators was interesting. liked some of the commentary

Pretty good but slow some times

The two narrators do a great job with putting that 'oomph' into the words they read.

What could Nick Mamatas have done to make this a more enjoyable book for you?

The ending was not satisfying and it leaves you feeling hollow. Maybe that's what Nick Mamatas wanted.

The problem with this book is that none of the characters are remotely likable or even interesting.

Basically the story (no spoilers) is this. A nosey vegan writer gets really involved in a murder at a neckbeard convention. None of the neckbeards come off as remotely threatening though so there's never any sense of urgency or real danger.

The characters dont seem to react normally to events as they unfold, it's all just too underwhelming.

The ending is absurd and there's no way to guess who the killer is. it's just handed to you at the end.

Spent several hours listening to this audiobook with my girlfriend during a road trip. She is not a big HP Lovecraft fan while I have always enjoyed his works. Neither of us could put up with this book beyond a couple hours. Nothing happens for far too long and dialogue is uninteresting.