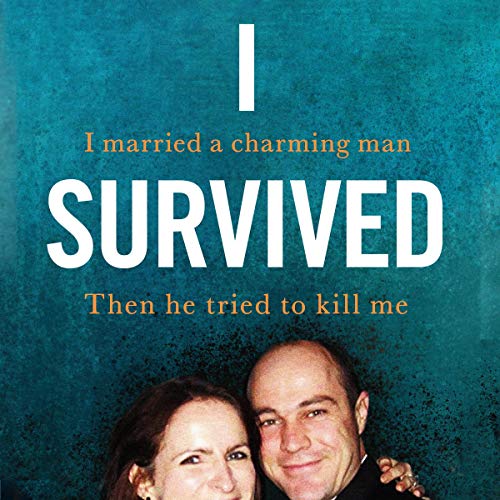 A chilling, eye-opening story of marriage and attempted murder, revealing the truth about a case that made headlines around the world.

On Easter Sunday 2015, experienced skydiver Victoria Cilliers undertook a parachute jump, a gift from her husband, British Army Sergeant Emile Cilliers. Her parachutes failed to open, and she plummeted 4,000 feet to the ground, sustaining life-threatening injuries. Miraculously, she survived.

Then the police arrived at her door.

Someone had tampered with her parachute, and they suspected Emile.

In I Survived, Victoria describes how she fell for Emile and how the charming man she thought she knew gradually revealed a darker side, chipping away at her self-worth until she found it impossible to sift truth from lies.

Can she really believe that her husband - the father of their two young children - tried to kill her?

As more shocking revelations come to light and she has to face his trial and relentless media scrutiny, she struggles to come to terms with the past.

Even a guilty verdict does not free her because Emile is not ready to let her go.

Powerful and honest, I Survived is the story of a woman who was put through hell and yet found the strength to forge a new life for herself and her children.

What listeners say about I Survived

Narrator’s voice a bit grating. Really wish author had have been able to explain why she thought her husband ‘still loved her’ despite him stealing from her, having multiple affairs, lying to her and just generally being a smuck. I understand about domestic abuse and all it’s forms, but this poor ladies take on it makes you want to scream out loud. She kept saying he would not have wanted to hurt the children! All of the above and killing their Mother, would have certainly hurt them. This book tells her story but doesn’t really explain things properly. I’m left frustrated!!!!!

If in doubt, hire a pro

'This book is missing something,' I pondered internally. I scratched my head and the expression on my face became puzzled. 'What could it be?' I quizzed aloud.

Then it came to me. The ends of my mouth turned upwards and I beamed. 'That's it!' I barked happily. 'This book is missing a decent ghost writer and instead we're forced to accept a narrative reminiscent of a year 8 pupil's English Language essay.'

What, Why and How?

Its quite distressing to hear how long the abuse went on for in this story and the fact this intelligent person put up with it and blamed herself for so long. I felt aggrieved she even visited him in prison. What a hold one human being can have over another and to what lengths they can be tested before they wake up. A survivors story indeed .

She certainly did survive - not just the fall but the most manipulative awful marriage. I had heard about this on the news but had not realised the awfulness of it. What a brave and strong woman! Do not hesitate to listen to this story - really made me realise what an absolute gem of a husband I have!

Found myself throughout the story shaking my head in frustration as the story was told, lots and lots of signs that Emile was selfish, self absorbed etc especially even before they married when Victoria miscarried and he decided to go on to a planned event and he gave her the car keys to drive home herself, to me personally massive red flag.
What she endured with him she has survived thankfully and hopefully now in 2021 she and her two children are living a great life x

Hindsight is exactly that.. and learning how many challenges and how many career climbs Victoria made, a reaction could be about the blinders and denials so many think they would have dealt with...but this book is also a lesson in how far women...and men...have not come. Too many children are not raised to be self-sufficient, secure in the fact it is okay to get a founndation in their own life and to find the love we need and want through family and friends without the false belief that your life is not comlplete wiithout a partner. It is not that 1/2 + 1/2 = 1 but that 1 +1 = 2. So many of us find that out so late....children need this understanding as much as math and science. We cant all be rich or own homes or travel the world but we can be happy in who we are. Thanks, Victoria, for being brave enough to share your life and inner growth.. i wish you all you certainly are deserving of.

This book is a triumph in survival...I loved this book I had followed the case when the story broke and I was pleased to get the facts from someone who was there and as a result the book is a record of dark domestic abuse which at times is so uncomfortable to read. Many times during the book your left thinking how could you not know???? But the reality is his abuse had such an acidic hold all she believed was his warped reality.

The narration was excellent and a pleasure to listen to. This book is testaments I the human spirit and I wish the author every success you deserve to be happy.

What a women! So strong, so compassionate and so brave! Blown away by how much trauma this woman has been through and how she has come out the other side so resilient and to be able to write a book. Also a reminder that coercive control and domestic abuse can happen to anyone.

The performance is not ideal, sounding a little bit like an answering machine, but the story is clearly told. It's not a great work of literature but a startling insight into the event which many others remember from the news.

I struggled listening to this with how she clearly can’t see what was happening. I’m so sad for her that she stayed with him for such a long time and then defended him again and again.
She gets frustrated with the lawyers but the world is frustrated with her not wanting her psycho husband locked up.
It’s insightful and I really feel for her but could have done with a ghost writer to help take it to the next level.

I couldn't stop listening to this amazing story of survival.

Unfortunately it's another story of DV that, in this case, lead to an attempted murder.

I found this hard to listen to at times but couldn't stop listening. Glad I read it.

I enjoyed this overall. Faltered a bit in the middle, when I thought she was ignoring key elements of Emile's manipulation, but the conclusion brought it together. The language is a little limited, but she's not a professional writer. An interesting, if rather horrifying, story.

The narrator has a great voice that makes it easy to listen to. I felt so sad for Vicki the whole way, what that man did to her was horrible. I couldn't turn the audio off, I've listened at every spare moment for 3 days straight.

A really incredible story about such a brave and tenacious woman. Well worth the read.

Victoria is an absolute inspiration! Having gone through my own domestic violence I related to so much of her story. I was cheering for her by the end! So empowering.

I survived, and missed so manny red flags.

I was captivated the whole time, wanting more and not wanting to stop listening.
The book is raw and shows a woman's strength and honesty.

It was a little hard to get into . Whether it was the narrator or the story - not sure , but I persisted and finally liked the outcome .

I had a bit of a cry at the end of this book as it was such a powerful story. It was written in such a powerful manner with the ultimate story being about her story her truth her strength and her power within herself.
I really appreciate her sharing her story it was lovely to listen to!