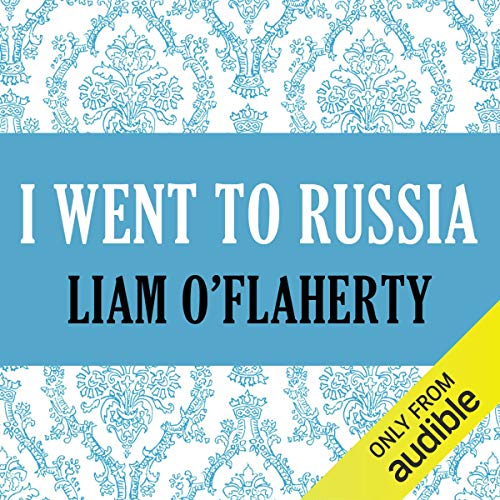 I Went to Russia

O'Flaherty (1896-1984), a young founder of the Irish Communist Party, was a member of the later generation of Irish renaissance writers. By his own admission he set out for Moscow on April 23, 1930, to collect material for a book on Bolshevism "to join the great horde of scoundrels, duffers and liars who have been flooding the book markets of the world for the last ten years with books about the Bolsheviks.

Liam O'Flaherty aka Liam O Flaithearta (1896-1984) was a significant Irish novelist and short story writer and a major figure in the Irish literary renaissance. O'Flaherty was the son of Maidhc O Flaithearta and Maggie Ganley of Gort na gCapall. In 1908, at the age of 12, he went to Rockwell College. This was followed by enrollments at Holy Cross and University College, Dublin. He did not attend the first two schools for long. He had intended joining the priesthood, but in 1917 he left school and joined the Irish Guards under the name 'Bill Ganly'.

He served on the Western Front, where he was injured, and it is possible that the shell shock he suffered may have been responsible for the mental illness which became apparent in 1933. After the war O'Flaherty left Ireland and moved to the United States, where he lived in Hollywood for a short time. The well-known director John Ford, a cousin, later turned O Flaithearta's novel, The Informer, into a film. Many of his works have the common theme of nature and Ireland.

He was a distinguished short story writer, and some his best work in that genre was in Irish. In 1923, O'Flaherty published his first novel, Thy Neighbour's Wife, thought to be one of his best. Over the next couple of years he published other novels and short stories. In 1933 he suffered from the first of two mental breakdowns. He travelled in the United States and Europe, and the letters he wrote while travelling have now been published. He had a love of French and Russian culture, and this may have been part of the attraction he felt towards communism. Before his death, however, he left the Communist Party and returned to the Roman Catholic faith.

Again. PRINT more of O'Flaherty's books - John Lee does seamless switching between Irish-Russian-British accents. Worth listening to even if you don't know who O'Flaherty is.

In the 1930s, Liam Flaherty went to Russia. He arrived by steamship, interacted with the crew, saw how they treated each other, Finns at a port, and then his impressions of the USSR. His observations of what he saw of the lies they told each other, what impressed him, what made them afraid, give one an impressionistic, traveler's eye view of Russia between the two Great Wars. Some of his observations are funny, some are sad, but all speak of truthful experience.