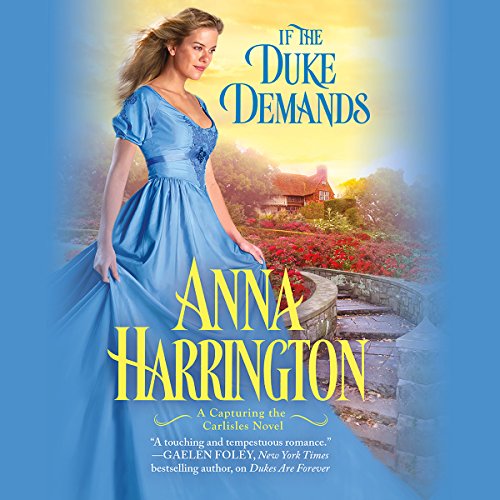 If the Duke Demands

A lesson in seduction....

Miranda Hodgkins has only ever wanted one thing: to marry Robert Carlisle. And she simply can't wait a moment longer. During the Carlisle family masquerade ball, Miranda boldly sneaks into his bedchamber with seduction on her mind. Soon she's swept into rock-hard arms for the most breathtaking kiss of her life. But when the masks come off, she's horrified to find herself face-to-face with Sebastian, the Duke of Trent - Robert's formidable older brother.

Shocked to find Miranda in his bed, Sebastian quickly offers her a deal to avoid scandal: He'll help her win his brother's heart if she'll find him the perfect wife. But what begins as a simple negotiation soon spirals out of control. For the longer this reformed rake tries to make a match for Miranda, the more he wants to keep her all to himself.

"Narrator Justine Eyre is the perfect fit for this Regency romance.... Her voice is textured and full of emotion, and her British accent draws the listener into the story.... Eyre varies her narration as the story moves from passionate romance to humor and scheming. She gives each character a unique voice - from the determined-sounding Miranda to the deeper, more forceful tone of Sebastian. Listeners will eagerly await the next installment in this new trilogy." ( AudioFile)

What listeners say about If the Duke Demands

What did you love best about If the Duke Demands?

In the beginning of the book when Miranda Hodgkins believes herself to be in love with Robert, a second son, and plans on seducing him at his mother's masquerade Birthday party. Miranda was raised playing with the Ducal family and Robert still treats her like a child. She wants to prove to him she is a woman. Miranda's impetuous nature often gets her in trouble and her attempted seduction of Robert is no exception.

It is the first true Historical Romance novel I have read in a long time (no other genres included, i.e. mystery, etc.) and very well written. It takes place in 1822 when society's social customs and etiquette were all important. Miranda, being an orphan raised by an aging aunt and uncle, had dreamed of a season in London, but never thought it would come to be a reality. Miranda was kind and supportive of the Duchess when the Duke died and the Duchess wants to give Miranda a season while she is of an age. The Duchess provides everything: new gowns, shoes, etc. and teaches her "society" rules and etiquette. Being a country girl everything is new and exciting to her. Sebastian, the new Duke of Trent, makes her transition into society easy for her, appearing at her first ball on his arm and dancing the first dance with her, as part of a deal struck between himself and Miranda on the fateful night of his mother's Birthday party.

Have you listened to any of Justine Eyre’s other performances before? How does this one compare?

Yes. I used to enjoy her performances and then I bought a few books where she whispered all through them and it was very disconcerting, so I began omitted books narrated by her. BUT SHE'S BACK! Her performance was excellent in "The Duke Demands".

I found myself teary eyed on more than one occasion. I also had to chuckle at times; like when Miranda and the kids at the orphanage she works at wrote a pirate scene into their study of Shakespeare.

It has explicit sexual content but well written. To my knowledge it is the first time I have read/heard any of Anna Harrington's work. She is a very accomplished author. I really like her style of writing, and Justine Eyre's narration was the icing on the cake.

I highly recommend it for a mature audience.

I don't think anyone that likes sense in the plot of a novel. Even though romance is escapist literature, there still requires some belief in the events. Nothing seemed to be true to the era.

I hesitate when the narrator is JE. She is not a very good narrator, as she is breathy and over the top. I find her readings very irritating and probably should have avoided this book. She made a poor story worse. I am avoiding some of my favorite authors, because she is the narrator. I should have done the same with this one.

disappointment. It started out with some promise, but all the times the heroine would just arrive at the hero's house in the middle of the night in her nightgown did not seem realistic. Who would even do that in the regency era.

This was a very immature author. The story line was just a mess and the end of the story's proposal was so corny, I flinched while reading it. It was just so silly it ended the book on an even worse note than all the silliness during the entire book.

I didn't have a favorite scene

If there were just Miranda and Sebastian as a couple instead of Miranda, Sebastian and Robert 3 people in a relationship is a disaster

I would have loved to been able to give If The Duke Demands 5 stars but there is just to much repetitive angst going on in the story. Miranda Hodgskin is a orphan raised by her aunt and uncle, tenant farmers of the Duke of Trent. Miranda has always played with the Carlisle brothers and as she grows into a young lady she believes herself in love with second son Robert. She plots to trap Robert into marriage but all goes south. She finds herself in the wrong bedroom on the wrong bed.

Sebastian is a newly minted Duke who suffers from guilt of not being there when his father dies. He was with an actress. Now he finds himself having feelings for Miranda but she is not Duchess material and he says this over and over and over. Miranda is beneath him but he is sexually drawn to her and she eventually becomes sexually drawn to him. Only when she realizes she will never have his brother. Robert is in love with another women and is going to offer marriage to her.

This dance between Sebastian, Miranda and Robert continues all the way to the end of the book. When a Light in Sebastian mine comes on by way of his mother. The ending is rushed and not well thought out.

I rated this story higher than I normally would because of some very funny dialogue, which is always much appreciated.

This book went on too long. Nothing ever happened. Sorry but a little too boring.

I enjoyed the story

this is a sweet Cinderella like story. the characters are good the reading is outstanding. I would recommend it.

Pleasant escape with a great narrator

What did you love best about If the Duke Demands?

different voices that well distinguish the characters, and help to provide the historical & geographical context. Eyre is one of my favorite audio performers, along with Mary Jane Wells & Rosalind Landor.

I look for books by narrators I enjoy, and that's how I found this book.

The author uses the word HER throughout the story CONSTANTLY. Then on top of that the performer has such an irritating way of saying her Hs in words. Even if the word does not have the letter H in it the narrator still puts it in there HHHHHHHHHello HHHHHHHHow ahhhhhre are yhhhhhhhou you. That is how she talks throughout the audio which is super annoying I wonder if the author even listened to her own story via audio. Also the performer Ms Eyre made the hero sound like a moron nothing attractive in her performance of the hero. Never want to purchase an audio by her again

Great book full of romance and nothing else! Can't wait for book 2 in the series coming in the Fall!

It was fun up until the moment the heroine stopped respecting herself and let him take advantage of her.
But it ended well and she once again regained my interest.
The reader was fabulous. She was what kept me listening. My grandson even stopped fussing once I started the audio. (He's 3)
Now I want to hear about the brother😄

a nice romantic book. the bad British accent of the narrator was very off putting though

Loved the narration! I used to not like Justine Eyre but now she is one of the only narrators I can listen too! She was excellent as always. The brothers were so well portrayed, I especially enjoyed the banter between them. And Miranda was lovely to listen. It was a simple story, and had me crying several times. There is a lot of sex in it, but I was surprisingly okay with that! Definitely going to finish the series bc I am so curious to get to know Quintin and Robert more! And hopefully see Sebastian and Miranda in later books. Definitely recommend.

I loved the two main characters and their love story. Just gorgeous. Justine's narration is perfection. I cannot fault it and highly recommend.