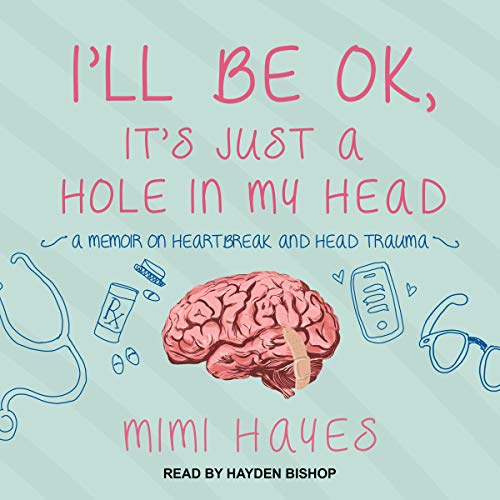 Mimi Hayes is a New York-based comedian and the author of the memoir I'll Be OK, It's Just a Hole in My Head. A former high school teacher and brain injury survivor, Hayes wrote her first humorous memoir while recovering from a traumatic head injury at the age of 22. Her honest take on trauma and love followed her to the stage as a stand-up comedian, where she has performed on stages such as Denver Comedy Works, Broadway Comedy Club, Stand Up NY, Dangerfield's, and The Upright Citizen's Brigade. She was highlighted by Mogul as a "New York City Comedian To Look Out For in 2018."

What listeners say about I’ll Be OK, It’s Just a Hole in My Head

I have been on the search for funny books dealing with TBIs. For me, Mimi’s book struck chords when I least expected it. The chapters dealing with rehab, work and dating really resonated with me. Brain injuries are all different but this book shows that the struggle to recover, the fear of being abandoned by our support groups and just wishing for normalcy are universal. I appreciate that this book comes in audiobook format. Making books like this accessible either in audio or large print format is very important.

Loved this! Perfectly describes the struggles of recovering from a brain injury with a side of comedy and guacamole.

I really enjoyed this inspiring story. it was very encouraging. Hayden Bishop did an outstanding job narrating the book and made it even more enjoyable.

This book spoke to me on so many levels. As a person who suffered a stroke at an early age, Mimi’s story is something I needed to read years ago. Her playful humour and determination to work through whatever got in her way was inspirational to read. I love that she uses humour to educate and entertain the population who haven’t had this happen to them. And thirdly the overall message she drove home which is whatever happens you will be okay .