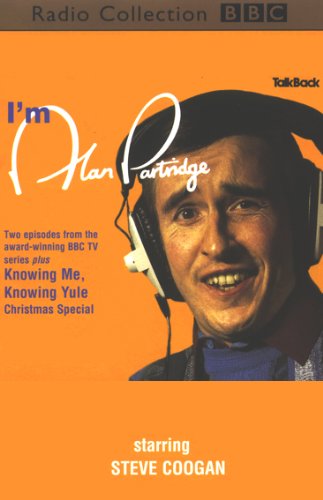 Two episodes from the award-winning BBC TV series I'm Alan Partridge starring Steve Coogan. Listen to Alan attempt to rebuild his career as an early-morning DJ on Radio Norwich. His wife has left him for a fitness instructor and Alan had moved to the luxury of the Linton Travel Tavern (big plate not included!). Despite his empire crumbling around him, Alan is unabashed, remaining true to his sports casual dresscode and carrying on the belief that he is on the cusp of persuading BBC Numero Uno, Tony Hayers, to give him another series.

Plus the Knowing Me, Knowing Yule Christmas Special, where Alan brings a festive bumper selection of guests together for a Christmas special live from his Norwich residence.

Coogan doesn't have to rely on boorish swearing. He's much too creatively intelligent to settle for that brand of comedy.

NOTE: For American English speaking listeners hearing a thick northern English accent for the first time can be puzzling. Don't let it bother you just keep listening and you'll acclimate yourself in no time.

I loved Steve Coogan in "Philomena" and "The Trip", so, it was a nice surprise to hear his Alan Partridge comedy. It's also interesting to hear BBC comedy versus American comedy. It's hard to find enough humor out there.

This is a must for any alan fan. listen to his autobiog it is utter brilliance. knwoing me alan partridge know you.............

Alan is timeless. Unlike his leather underwear. Cant believe he did not make Alan the latter years

So funny, the best thing I've ever listened to: I've listened many times now!

Is there plans for a sequel?

the man is a master of funny.

same as a couple of TV episodes but they're still brilliant without the video. could listen hundreds of times and it still wouldn't get old.