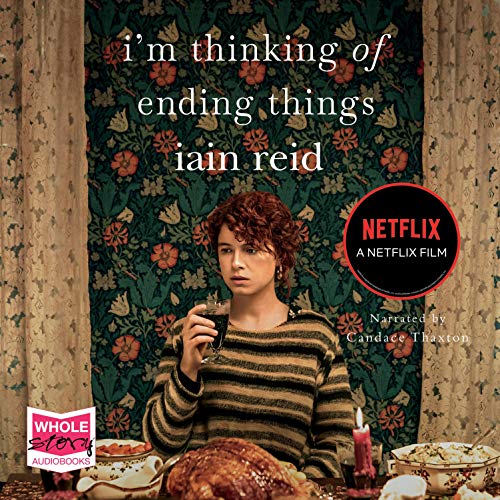 Soon to be a Netflix film directed by Charlie Kaufman

Jake and his girlfriend are on a drive to visit his parents at their remote farm. After dinner at the family home, things begin to get worryingly strange. And when he leaves her stranded in a snowstorm at an abandoned high school later that night, what follows is a chilling exploration of psychological frailty and the limitations of reality.

Iain Reid's intense, suspenseful debut novel will have listeners' nerves jangling. A series of tiny clues sprinkled through the relentlessly paced narrative culminate in a haunting twist. Reminiscent of Michael Faber's Under the Skin, Stephen King's Misery and the novels of José Saramago, I'm Thinking of Ending Things is an astonishing and highly original literary thriller that grabs you from the start - and never lets go.

"In a novel this engaging, bizarre and twisted, it shouldn't come as a surprise that its ending is even stranger than the narrative route that takes us there...but it does. Reid's novel is a road trip to the heart of creepyness." (Sjon)

"I'm Thinking of Ending Things is one of the best debut novels I've ever read. Iain Reid has crafted a tight, ferocious little book, with a persistent tenor of suspense that tightens and mounts toward its visionary, harrowing final pages." (Scott Heim)

"Here are some near-certainties about I'm Thinking of Ending Things. Number One: You're going to read it fast. Over the course of an afternoon or an evening. The momentum is unstoppable once you start, you won't be able to stop. And Two: once you race to the end and understand the significance of those final pages, you won't be able to stop thinking about it. This novel will find a spot in your heart and head and it will live there - for days, weeks, months, or (in my case) the rest of your life. Yes. It really is that good." (Nick Cutter)

What listeners say about I'm Thinking of Ending Things

Weirdest book I have ever read/listened. I have read psycho thrillers earlier, but this one was really weird.

Jake and his girlfriend go on a road trip to meet his parents, Jake's girlfriend is however has lot of thoughts passing through her. You assume she wants to break up with Jake and author let's you imagine, but the ending is frigging insane! the whole of book read like a boring 2 star book, but the ending is like a cake smash in the face.

Not sure if i understand the ending.

I love it when characters strike up a good conversation and nerd each other out. literature is so good and witty. In the end I got an eerie feeling, I wish I was listening to the end in the morning instead of night. Somehow it's more like horror. I don't know if I will suggest this book for entertainment, I am not sure about anything about this book. What the f*** did i listen to, what was the point of it.

Narrator did a great job. The setting and tone was really creepy, making the whole listening experience eery. Kept me on the edge of my seat the entire time. Highly recommended.

Wow! This was some listen. I don’t want to get into the story or the plot, and would highly suggest that you don’t read the blurb (if your edition has one). All I’ll say is that this is superrrr creepy. It gives you all the weird scary feels, even though there’s nothing technically scary happening. From what I see, people either love it or hate it. I definitely enjoyed it.

Big big big shoutout to the narrator - she is fantastic! Don’t know if it was her or the writing (most likely, it was a mix of both) but my heart was beating loudly during half or more of this book. This is not an exaggeration at all. The narrator is brilliant, and the book format, being in first person, also lends brilliantly to being heard. I actually think this book is probably better heard than read.

All in all, gave me all the creepy feels. I actually didn’t understand the ending initially but when I did, I was like- oh my god. This is one of those - “what is even happening” kind of books, but in a good way. Would definitely recommend.

a nice listen though i could predict it

it is scary in a way that you would keep on guessing what will happen next but after a while you can guess the actual plot or even the ending for that matter . but overall i will rate it 4

One of the most beautiful works!! I was hooked onto the book and the Audioversion was equally good. loved it from start to end. Creepy, weirdly philosophical, absurd but Thrilling !!

I love the ending, it’s definitely one that will leave you thinking a lot ! I can’t wait to watch the movie once it’s out.

it was absolute well written. I enjoyed every minute of it , love it

Interesting story. Didn’t get it the first time. Don’t think I’ll ever get it but will read as many times as possible.

This is an example of a book that is best listened to rather than read. Looking back, seeing the film first only heightened the ending when listening to the book. I need to see the film again, did I miss something.

I was both bored and intrigued

To be honest I have no clue what actually just happened, I'm very confused. At the end it felt as if I'd just watched the movie Identity, with the guy who tells a story, but all the characters were parts of his personality and it was all in his head. Is that what happened here? I found it intriguing but it was also pretty boring for the most part. I'm glad i read it, but I doubt I will still be thinking about it by tomorrow.

Loved this story and listened to the whole thing over a few days. However, I think this might be one of those books which is better in paper form. I have subsequently bought the book and especially towards the end, there were certain aspects, like italicised writing and repeated phrases, which have a greater visual impact. Still thoroughly enjoyed.

Just couldn't stop listening to this! Really well done and makes you think so much!

A bad philosophy book disguised as a novel

I feel robbed of 5hrs of my life. why did I finish you ask? thought it would go somewhere. may as well have ended with "and then I woke up". much to think about

An enveloping sense of unease and wonder

Powerful story, compelling journey. Watched the movie, and both book and film are captivating in their own separate ways. The tension towards the end really crept up on me. A wonderful sense of unease. Enjoyed this immensely.

atmospheric and creepy but ultimately fizzles out

An intriguing narrative draws you in and gives genuine creeps without it being clear why. ultimately though the story falls into the trappings of a lot of 'twist' narratives where most of the narrative feels redundant once you know then ending.

I'll be honest, this book was probably a 2, maybe 3-star at best, before the final third. This is definitely one of those that hinges on the ending whether someone will like the book or not. For me, it makes everything I read up to that point make sense and has had me replaying the events of story over in my head ever since. It completely floored me. Which isn’t something I thought about 4 hours into this 5-and-a-half hours audiobook as, while I was never bored, I was oftentimes thinking where the seemingly meandering plot was heading. I’m glad I knew nothing about the plot when starting the read as I felt it was incredibly rewarding to discover the story as it was being told, regardless of how frustrating some of the elements were.

Would highly recommend for fans of horror, and as said before, try going into this one cold.

Do not waste your time. So many major plot holes and unanswered questions.. have I written 15 words yet?

in all honesty i had no idea what was going on the entire book, i enjoyed the narration and i guess the idea of the story is good but it kinda goes on forever then you get 15 mins of drama and then it ends.. l

Not going too much into the storyline itself for fear of revealing spoilers, but this book is incredible for so many reasons! The performance from Candace Thaxton was very good too. It was very rare that I would have to think about who was speaking. Granted, this is not a book one can idly listen to while doing other things. I had to focus on what was being said and what was being happening to understand the climax of the book, but the payoff was well worth the effort. Definitely recommend!

And a strong story. I hope to hear more from Ian Reid in Audible soon

Pointless story. I wasted my time hoping it would turn into something worthwhile. It just went on in an aimless journey to an uninspired ridiculous ending.

I’m still not entirely sure I know what happened even after the end, a bit too philosophical for my taste.

The performance was great, I was hooked right up until the end but was let down by yet another story using mental illness as a plot device and in doing so, leaning into incredibly harmful stereotypes. The ending was so disappointing and frankly I’m tired of seeing films and reading books use lazy writing and label it a psychological masterpiece.

The beginning of the book is seemingly normal, but eventually makes the reader unsettled as the story progresses. Big twist at the end, highly recommend.

Had high hopes for this story as it was recommended and meant to be a really good horror book, but was confusing, the suspense didn't really lead to anything and there are so many unanswered questions.
This is just my opinion though, you may love this book

I never say that, but seriously, almost everything interesting about the movie was Charlie Kaufmans idea. I feel like I've wasted six hours. At least its got pretty good dialogue in it.

This was an interesting story. I heard it’s written to be consumed in one sitting, so that’s what I did. The ending is ambiguous and the story as a whole is a little strange, but it’s still enjoyable.

no good. makes no sense and nothing happens. reveal at the end is not worth it.