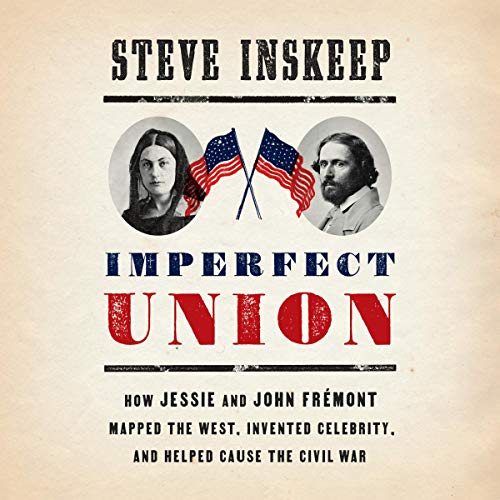 Steve Inskeep tells the riveting story of John and Jessie Frémont, the husband and wife team who in the 1800s were instrumental in the westward expansion of the United States, and thus became America's first great political couple.

John C. Frémont, one of the United States' leading explorers of the 19th century, was relatively unknown in 1842, when he commanded the first of his expeditions to the uncharted West. But in only a few years, he was one of the most acclaimed people of the age - known as a wilderness explorer, best-selling writer, gallant army officer, and latter-day conquistador, who in 1846 began the United States' takeover of California from Mexico. He was not even 40 years old when Americans began naming mountains and towns after him. He had perfect timing, exploring the West just as it captured the nation’s attention. But the most important factor in his fame may have been the person who made it all possible: his wife, Jessie Benton Frémont.

Jessie, the daughter of a United States senator who was deeply involved in the West, provided her husband with entrée to the highest levels of government and media, and his career reached new heights only a few months after their elopement. During a time when women were allowed to make few choices for themselves, Jessie - who herself aspired to roles in exploration and politics - threw her skill and passion into promoting her husband. She worked to carefully edit and publicize his accounts of his travels, attracted talented young men to his circle, and lashed out at his enemies. She became her husband’s political adviser, as well as a power player in her own right. In 1856, the famous couple strategized as John became the first-ever presidential nominee of the newly established Republican Party.

With rare detail and in consummate style, Steve Inskeep tells the story of a couple whose joint ambitions and talents intertwined with those of the nascent United States itself. Taking advantage of expanding news media, aided by an increasingly literate public, the two linked their names to the three great national movements of the time - westward settlement, women’s rights, and opposition to slavery. Together, John and Jessie Frémont took parts in events that defined the country and gave rise to a new, more global America. Theirs is a surprisingly modern tale of ambition and fame; they lived in a time of social and technological disruption and divisive politics that foreshadowed our own. In Imperfect Union, as Inskeep navigates these deeply transformative years through Jessie and John’s own union, he reveals how the Frémonts’ adventures amount to nothing less than a tour of the early American soul.

"This is one of those listens that makes you wonder how people like Jessie and John Frémont can have escaped history - and a Hollywood treatment. It also makes you wonder how authors and narrators like Inskeep find the time to do what they do - and do it so well.... Not surprisingly, [Inskeep is] an effective and engaging narrator. His enthusiasm for his main characters is apparent but never approaches hagiography. Since he's a professional broadcaster, you'd expect his reading to be crisp and his inflections just right. And they are. This is an engaging and rewarding listen." (AudioFile Magazine)

"An insightful and welcome biography of consequential Americans." (Booklist)

"Highly readable.... A lively introduction to a pair of flawed yet extraordinary figures in the nation's movement westward." (Kirkus)

"Imperfect Union is a fascinating, complex love story, a riveting adventure, and an important, carefully researched history, told with incredible power and skill by one of the country’s best nonfiction writers. What else could you want in a book?" (Candice Millard, author of Hero of the Empire)

A delightful yarn of a complicated story

This was fantastic. Steve Inskeep’s narration keeps the listener engaged through a story that develops slowly and ends with a clearer picture of whom the hero in the story is.

Thoroughly delightful in its entirety.

I'm just here for the stuff on the Know Nothings

This book takes a great examination of the political forces which have long sought to deteriorate, disrupt and dissolve our United States of America. No sooner had the ink dried on the Constitution that certain Americans began having "Dis-union Dinners" to plot and support a path to ensuring slavery, xenophobia, and white Anglo political control for their states.

This is a well told story, made clear but never oversimplified by Steve Inskeep. What is remarkable is the extent to which politics has remained the same over the years. When John Fremont ran for president in 1856 he was first accused of being a Catholic (he wasn't), then a Mohammedan (he wasn't), then not a legal US citizen (he was). Freemont was born out of wedlock to a Frenchman (gasp!), a fact which emerged during the dirty tricks campaign conducted by Democrats against Freemont. So basically all the gutter accusations and innuendo were already baked in. What we are now seeing is merely a continuation of the process.
I enjoyed listening to this. There are times when Inskeep's default tone of incredulity wears thin, but mostly he is the right man for the job of reading this. This is scholarship done right, made understandable by careful research and editing.

A reminder how history can be forgotten and how it repeats

I selected this book because I appreciate Steve Inskeep’s reporting for NPR and also enjoy his voice. His book “Imperfect Union” taught me history I was unaware of provided a reminder how aspects of history repeat themselves over and over. If you are inclined to learn more about American history or past women that helped form our country and certainly were not given their due, this is an excellent audio book to choose.

While it would be wrong to call the Fremonts unremarkable, a fair assessment of their lives and legacies would have to land somewhere between vaguely adjacent to significant and less than truly consequential. The author puts this idea of imperfection in the title, and slides it into the middle element of his subtitle "inventing celebrity", meaning it, it seems to me, as a pejorative. In fact, the Fremonts do not come off very well at all in this book. John, of low birth and insecurity, is defined more by his incompetence in military matters and corruption in business. Jessie, called "the better man of the two" (again, not entirely meant as a compliment) is cast as a poor little rich girl, with powerful familial connections. She has more ideals than action, a bit too spoilt and narcissistic to be considered truly heroic. Her bravery is shown by surviving an uncomfortable ship voyage and living in less than glamorous hotels. Her complaints seem a bit tone deaf, when put contrasted with the lives of those in slavery, for whom she is ostensibly an advocate..

In fairness, the story does move at a decent pace, though often the Fremonts are tangential characters in their own story. And even then only almost worthy of greatness.... climbing not the highest (nor even the 100th highest) peak in the Rockies.... traveling the Oregon trail, just not being the first. A life of almosts. Even their politics, they are ruled by expediency rather than conviction. I didn't find them particularly admirable at all, though it clearly was the author's intention to do so. By getting by on celebrity, making self-aggrandizing claims that, at best strain credulity, at worst are outright lies, and using any means, ethical or otherwise to survive in politics, business, life..... in that way, they may be the template for modern Americans.

Bi-coastal couple before the US had a left-coast

This is a fascinating book about an improbable and well-matched couple during a tumultuous time leading up to the Civil War. Anyone who is interested in US history, particularly of the West, before the West was became the West, should read this book. It is beautifully written. And lovingly narrated. Because this book deals so much with gender roles, it would make a great book for book clubs with both women & men.

This is is story with no fictional characters. It is as easy a listen as a historical fiction book. Keeps interest Ll the way through. The reader is perfect for this book. I highly recommend it