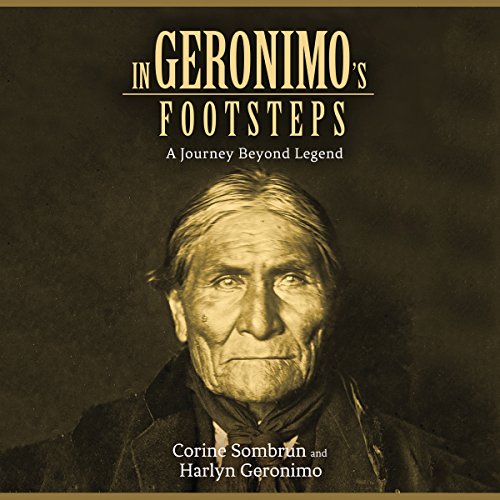 The name "Geronimo" came to Corine Sombrun insistently in a trance during her apprenticeship to a Mongolian shaman. That message and the need to understand its meaning brought her to the home of the legendary Apache leader's great-grandson, Harlyn Geronimo, himself a medicine man on the Mescalero Apache reservation in New Mexico. Together, the two of them - the French seeker and the Native American healer - would make a pilgrimage that retraced Geronimo's life while following the course of the Gila River to the place of his birth, at its source. Told in the alternating voices of its authors, In Geronimo's Footsteps is the record of that journey. At its core is an account of Geronimo's life, from his earliest days in a Chiricahua Apache family and his path as a warrior and chief to his surrender and the years spent in exile until his death, at Fort Sill, Oklahoma. Recounted by his great-grandson, his story is steeped in family history and Apache lore to create a portrait of a leader intent on defending his people and their land and traditions - a mission that Harlyn continues, even as he campaigns to recover his ancestor's bones from the U.S. government. Completing Corine's circle, the audiobook also explores the links, genetic and possibly cultural, between the Apache and the people of Mongolia.

What listeners say about In Geronimo's Footsteps

The Footsteps Of A True American Legend

Would you listen to In Geronimo's Footsteps again? Why?

Yes! The story of a true American legend, Geronimo. The book is told thru the knowledge of his grandson and a Shaman that shares a connection. She comes to Geronimo's grandson, and together they embark on a journey that will retrace the footsteps of, Geronimo.

What was one of the most memorable moments of In Geronimo's Footsteps?

The Native American tales told throughout the book.

This is the first one I have listened to, but will be watching for more books done by the narrators. Very well done.

For anyone that wants to know or understand the hardships endured by the Native American, I recommend this book. It is a great listen that takes you on a journey step by step, into history.

Boring story about a roadtrip...should have passed

Each chapter is split into two parts. The start of each chapter begins with Corine Sombrun's lengthy narrative of her road trip with Harlyn Geronimo and his two granddaughters to the White Mountains of Arizona. Sombrun masterfully weaves each roadside potty break, and the amount of candy the granddaughters eat with stops for diesel fuel and McDonalds in this wonderfully boring story. I had to will myself to stay engaged. I was rewarded at times during the second half of each chapter where Harlyn Geronimo told short and sometimes interesting stories of his great grandfather. Overall this is not the book about Geronimo I was hoping for.

Two amazing stories come together in this book. First is Corine Sombrun's story of a French woman becoming a confidant of Harlyn Geronimo, the great grandson of Geronimo, of her visions while she was in the Amazon forest that sent her to Mongolia, then her visions of Geronimo while apprenticing to a holy woman in Mongolia who lived in a tepee just like the Apache half way around the world. You could not make this up. It is a fantastic story that excites the imagination and stirs the soul because it derives from non rational forces of the human spirit that we all yearn for. The ancient connections between cultures and genetics in Mongolia and New Mexico are astounding revelations. Then, the second story is Harlyn Geronimo's story of his great grandfather, Geronimo. How he lived, fought and died in captivity. Harlyn's own story is no less moving as he tells of struggling to reclaim Geronimo's bones from the theft by Yale's secret society, Skull and Bones. Geronimo's skull and leg bones are believed to have been stolen during a 19th century raid led by Prescott Bush, the ancestor of two American Presidents. Wow. The story unfolds as Harlyn with his two young granddaughters in the back seat, drive Corine across the New Mexico desert talking and laughing all the way. The epilogue about their book tour of Europe and the on-going case to reclaim Geronimo's bones is a moving climax of both stories. The post script by Ramsey Clark about the case is right on point. I couldn't recommend this book any higher than I do. Incredible book! And I should add, that the narrators are excellent. The female story teller's voice is charming and captivating, a great bonus for listeners. The translator produced a seamless text that did not miss a beat.