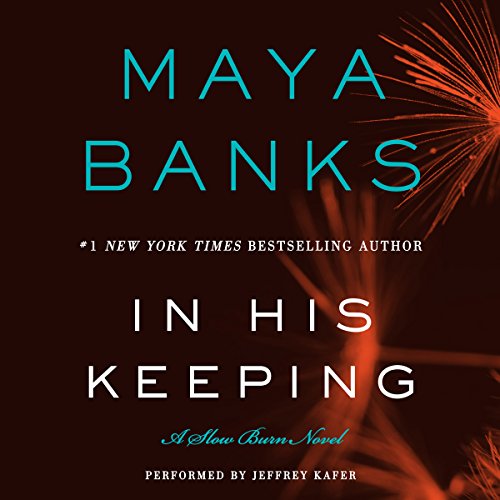 Arial knows the rules that keep her safe. She's been following them since she was a little girl: Do not tell. Do not show. But in a moment of terror, facing an attacker intent on taking more than just her life, Ari has no choice but to unleash the psychic powers she's been hiding since childhood.

Now, with her abilities revealed, a bigger threat looms - something that makes her question everything she thought she knew about her parents and her secretive upbringing. But this isn't a fight she can face on her own.

As the head of Devereaux Security, Beau Devereaux is no stranger to the strange. But when he takes on a new client - a beautiful young woman with an extraordinary gift - Beau isn't prepared for the extent of his attraction to her. What began as a simple assignment, just another job, quickly turns personal as Beau discovers he'll do anything at all to protect Ari. No matter what it costs him personally. Even his heart and soul.

What listeners say about In His Keeping

What did you love best about In His Keeping?

A bit paranormal, a bit mystery, a bit love story. Love those alpha males. This book has lots of twists and turns. Loved it.

Luv this book, it was a good read! I luv it when a book is so good, that you put the rest of the world on hold, so you can finish your book!

Much better than first

What did you love best about In His Keeping?

Too many good parts, it's not overloaded with sex, and has great action scenes. I normally do not go for paranormal books but Maya Banks seems to be the exception.

What other book might you compare In His Keeping to and why?

Whisper In The Dark by Maya Banks. The story lines are completely different but these two are in my top 10 all time favorites.

When Ari gets mad stay out of her way!

This one is much better than the first in the series and I loved it. I cannot wait for the next one.

Maya Banks' older audio books were what drew me to, kept me coming back and keeping my Audible membership. If I were starting now with the newer ones offered by Audible, and didn't know about other great authors, they just wouldn't do it for me.

MA's older books are like a drug; I keep buying the audios when they are offered in the hopes that I'll get the same "high" as I did the first books/series I listened to of hers and again like a drug, I never get what I got the first time around.

I liked this book, I like this series, MA will always be an author I will try and whose website I will look at to see what's coming up. That said they just aren't as dynamic, exciting, suspenseful, and sexy/erotic as they once were. I'm disappointed.

on the edge constantly. loved it. narrator did a great job. loved Bo's love & devotion. Gaven's too

Similar to first one...

As in book 1 we find ourselves engulfed in a psychic world full of people after the psychic and only one of the brothers can protect her...except really I have to say he does a piss poor job of it. I have to say this series doesn't have the typical steam of a Maya book, but it was still okay to read.

Recommend you save it for a sale, it's kind of short and well not a lot going on.

Loved it. Couldnt put it down. The narrator was fantastic with a super sexy voice.

Love it great story, the two main characters compliment each great I couldn't put this thing down.

I all of Maya's books and this one is no exception. great book. must listen.

What made the experience of listening to In His Keeping the most enjoyable?

I ENJOYED THE WHOLE BOOK

HIS CHARACTERS CAME TO LIFE

THIS BOOK HAD ME CRYING

Another fantastic book by maya banks

Another fantastic book by maya banks
I Can't wait for the next one in the series . Roll on june 2015 !

She done it again

Love this book as much as the first one . Can't wait for the next book .and hope there more to come x