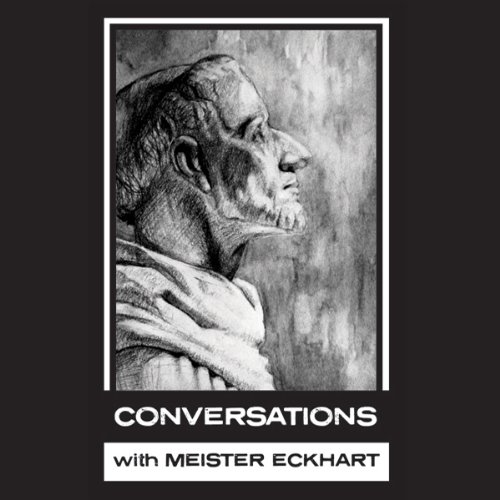 In His Own Words

In many ways, Meister Eckhart has had to wait seven centuries to be heard. Born in 13th century Germany, much of his life was spent in a monastery; though not all. The 'Meister' in his name means 'Master', and is an academic title from the University of Paris. An admired member of the Dominican Order, he was often sent to reform ailing priories. He was known also as a spiritual counsellor; a safe haven for many who sought God in their life, but found themselves troubled by the dire state of the institutional church. And in a century of flowering female spirituality, he was a supportive figure for many Dominican nuns and women in the burgeoning lay communities which arose.

He was best known, however, as a preacher - an original preacher who used his native German language to startling effect. Eckhart preached a spiritual vision which distrusted the artifice of both ritual and church dogma. Instead, he aimed at nothing less than the spiritual and psychological transformation of those given to his care. To this end, Eckhart made the disposition of the human heart the key to all things.

Conversations with Meister Eckhart is an imagined conversation with this 13th-century mystic, around such themes as detachment, which he famously placed above love; spirituality; God; the soul; and suffering. But while the conversation is imagined, Eckhart's words are not; they are authentically his own. One of his controversial claims was that God cannot be described. Indeed, in one sermon, he went so far as to say 'We must take leave of God.'

'The church became very hostile towards him,' says Simon Parke, 'accusing him of heresy; and he spent his last days on trial before the pope. They also tried to ensure he'd be forgotten when he died, and nearly succeeded. But he's more popular now than ever.'

Eckhart's teaching is an adventure, not a system; a call, not a creed. The depth and universality of his work means it can be ...

What listeners say about In His Own Words

I do not label myself as a Christian, but part of my fascination with the Middle Ages comes from building an understanding of how Christianity evolved through the ages and influenced the people and events. The two are inseparable. But sometimes studies get so big that we forget history and all of its ideas are first and foremost about people. Learning their personal views and ideas transcends all time barriers once the language barrier is broken.

The idea of this book is one that allows the reader to step back through time, to speak directly with Meister Eckhart. The questions are contrived in such a way as to facilitate this conversation. The answers are the master's own words, which are deeply spiritual (as one would expect) and worthy of comparison to studies of modern doctrine and belief. Much of it will be surprising, as this is the mind of a Medieval monk who was revolutionary even in his own time. Regardless of whether or not you agree with Eckhart's words, if you're inclined towards historical or spiritual studies (and I'm assuming you are if you're looking into this book), then this is worth the time. It's only about 3 hours long, but it's excellence of content is worth every second. Historically and spiritually, it's interesting to compare his views alongside, say Aquinas or Von Bingen, amongst others. This book can be an historical curiosity or a meditative quest, depending upon how the reader identifies with the material. It's the sort of thing that reminds us that both historically and spiritually, there are always other ways to see anything. There is always more to learn, more to experience, and more facets to the bigger picture than any one person or any one doctrine can illuminate.

I didn't realize when I purchased this audio book that it was presented as an "interview" with Meister Eckhart. But it was so seamlessly done, using Eckhart's actually words that it proved very effective. The questions helped clarify the normal questions one would have an repeating basic questions in different ways help very much.
The only very minor complaint is the "birdsong" chirping in the background. I assume it was added in the studio but either way I think it's fine in the beginning but proved a minor distraction. Very minor. Highly recommend this audio book.

A good book of the words of Eckhart and an insight into the profound depths of his realization. Interesting how Eckharts experiences are the same as found in the writngs and teachings of Buddhist and Hindu mystics in transcending multipliticity to achieve ONENESS .

Great performance with an even greater message

I enjoyed this presentation very much. I had never heard of Meister Eckhart until I listened to John O'Donohue. I know there are more to listen to and read. I am looking forward to it. He teaches in a way that makes sense but I never thought of. A truly amazing man.

Lots of acting but little substance

It is hard to imagine that Meister Eckhart would have been the clown as which he is portrayed here. I was looking for some true insights and wisdom but found it hard to find such within this mix of fact and fiction.

Interesting way of presenting Meister Ekhart materials. More materials should be presented. Loving it. Hope more would comes to audible

First, play this at .80 speed as the best pace to digest it.
The teachings of the Maestro are magnificent, Deo Gloria, unitive knowledge.
You must feed your soul on this over and over, for years; it will wash you and make you clean, sprinkling you with hyssop and making your heart whiter than snow.

Where does In His Own Words rank among all the audiobooks you’ve listened to so far?

would be better if the readers had a more constant tone when they speak it goes from very soft to loud and back. when using ear bits it is uncomfortable

A book to bring along everywere.

A wonderful introduction to the great master's teachings. One can listen to this small compilation of Eckhart's sermons and writings and get plenty of knoledge to think about, compartmentalize and digest

A great summary of Eckhart

This conversation is a great embodiment of Eckhart's philosophy and theology. The performance is top notch!

This short audio book, which I am now listening to for the fouth time, imagines an inteview with Eckhart using Eckhart's own words. This allows some explanation of his meaning and although it sometimes feels a rather self conscious format it is effective in its purpose. Eckhart's words are delivered well and it would be hard to read them as effectively to oneself as they are offered here. Eckhart is not deliberately obscure but simply seeking to say what cannot be said in words, to express truths that cannot be expressed. These are words to ponder, words to contemplate, words to help anyone who is seeking.

An accessible and engaging introduction to Eckhart

Parke's dialogue format works well and gives an immediacy to the medieval mystic’s 800 year old writings which remains true to his style. This may be of interest to anyone interested in religion and not only Christians. Those who are interested in exploring Christianity beyond the level of dogma may find Eckhert’s approach a liberating and challenging breath of fresh air – one which nevertheless remains true to the tenets of the faith.

This is a terrific presentation. I really like the contemporary way in which the interviewer approaches the questions. The listener feels that he is present at this conversation which is happening some 600+ years ago. Highly recommend but very profound!

An excellent introduction to Christian mysticism.

I really tried to appreciate what this influential man was saying, but after two difficult hours I realised that I was listening to the usual zealotry. Sorry to say this, but my search for sense in organised religion is going to have to continue. I bought this book because the synopsis hinted that Eckhart was a progressive and free-thinking spiritual influence. I think 700 years ago he may have been, and his beliefs led him to doing good in his life and annoying the Pope, both of which are commendable. But listening to this discussional format, and the regular 'posed' sighing and evident confusion from the interviewer who has to clarify each point that Eckharts writings make, I wonder if his position in history is best left just there - history. Some of the sentences are so long and circular in their trajectory that they lose any sense.

despite my hopes, and sweeping aside all the verbiage, Eckhart's teachings reduce to the same basic tenet, viz., Relinquish any responsibility to do good based upon natural altruism and an inherent understanding of right from wrong and replace it with good founded on fear of religious consequence and an egotistical wish to survive death. This does not adhere to my spiritual beliefs at all, but others will doubtless disagree.

This is the first time that I have shared Meister Eckharts words, and my first time with an audio book, both were a pleasure that blended perfectly in this conversational format. The setting that Simon Parke describes, the questions, the prompts, the probes, allowed the wisdom, held within the text, to become more accessible. While the portrayal of Meister Eckhart by Andy Harrison made the experience more personal, it felt like I was directly sharing the thoughts of this courageous, learned man.

I would like to thank all involved for what they have created...truly memorable.