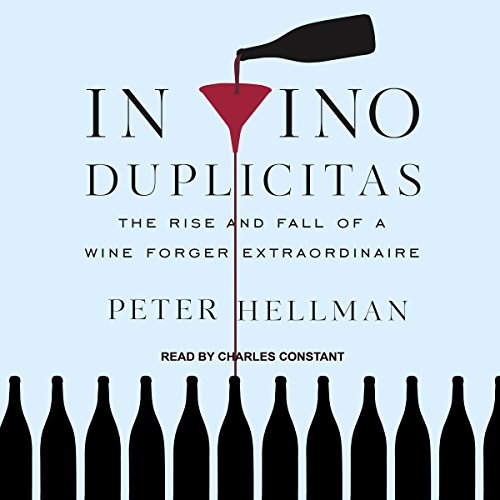 Few gain entry to the privileged world of ultrafine wines, where billionaires flock to exclusive auction houses to vie for the scarce surviving bottles from truly legendary years. But Rudy Kurniawan, an unknown 20-something from Indonesia, was blessed with two gifts that opened doors: a virtuoso palate for wine tasting and access to a seemingly limitless (if mysterious) supply of the world's most coveted wines.

After bursting onto the scene in 2002, Kurniawan quickly became the leading purveyor of rare wines to the American elite. But in April 2008, his lots of Domaine Ponsot Clos Saint-Denis red burgundy - dating as far back as 1945 - were abruptly pulled from auction. The problem? The winemaker was certain that this particular burgundy was first produced only in 1982.

Journalist Peter Hellman was there, and he would closely investigate as a singular cast of characters - including a Kansas-born billionaire, a wine-loving young prosecutor, and a crusty FBI agent - worked to unravel the biggest con in wine history. Whether driven by the love of wine or of justice, all were asking the same question: Was the mild-mannered Kurniawan himself a dupe? Or had one young man - with little experience and few connections - ensnared the world's top winemakers, sellers, and drinkers in a web of deceit?

"Heady, intoxicating...shines a light on the esoteric and intriguing world of ultrarare, ultrafine wines." ( Foreword)

What listeners say about In Vino Duplicitas

Very intriguing story! Enjoyed the comparison to Jay Gatsby and insight into the world of rare wine trading.

Very interesting. Just gets a little dry with the endlessly derailed references to various wines and vintages. If you enjoyed Billionaire's Vinegar, you will enjoy this.

well narrated and respectful of the real persons i

great story, lots of things learnt here about rare wines. i like the story is respectful of every character while informing on what was done illegally and in ignorance. looking forward for this book tobe translated in french so i can offer it to my family.

I appreciate the wine writer tried his hand at "true crime" but he should have stuck with wine and let a real drama writer write this one. He just can't put together the drama or the mystery. Which is too bad, because there is plenty of it here.

Nothing i didn’t know

I was hoping for more insight into the fake wine scandal. Nothing much new most can be learned in “Sour Grapes” documentary

Really enjoyed it, the story kept my ears glued to the details. The one thing that threw me was how it jumped back and forth on Rudy's age, and how some specifics were repeated at later points in the book having me think that u somehow jumped back to the previous chapter where it was mentioned earlier.
The narrator was great, his pronunciation of the French, Italian wines were fluent. I'm going to watch the Doc Sour grapes and see I guess a visual of some of the things heard in this book. I dont know if theres a movie about this counterfeiter, but I sure would love to see a movie based off of how this book was written. Looking forward to listen to it again in the future. 5* for sure.

This was one of my favourite audible books!! After listening to me go on and on about the stories in this book my husband actually listened to it with me. It was hard to find a good place to break because each chapter left you wanting more.
I doubt I would have enjoyed reading the physical book as much as I would have been too caught up in trying to correctly prounounce all the French wines.
If you want a fascinating read sit back and enjoy this book!

I think more information about the international money-laundering efforts by the family would have been a little bit more interesting.

Having watched the "Sour Grapes"
movie about this fraud case I was itching to learn more detail about how Rudy Kurniawan pulled off such a con. And how he was caught.

There is a little too much back story for me - lots of detail and stories about Burgundian winemaking families that I wasn't too interested in (and skipping an audiobook is harder than a physical copy). I think I was 2 hours in before Rudy fully enters the frame.

It is let down by the narrator - could he not have got a bit more help with the French words? I am studying for a wine qualification and was taking notes but I struggled to grasp some of the names (vineyards and villages) in the book. Actually I struggled with some and was just plain irritated by others! It's not Clos Sonn Denis, It's not Chamberton!

However it is still an engaging true story if you are interested in wine and crime!