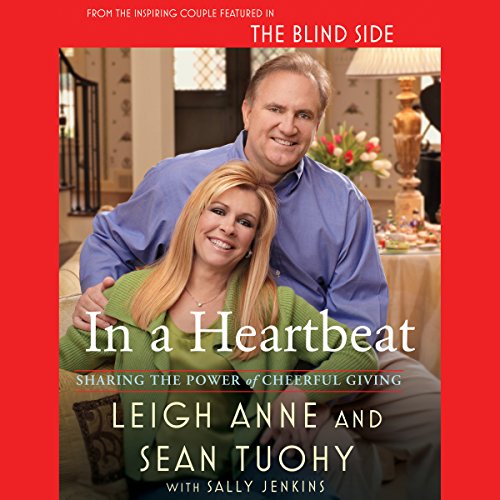 For the first time, the remarkable couple depicted in the film The Blind Side tell their own deeply inspiring story. First came the best-selling book, then the Oscar-nominated movie—the story of Michael Oher and the family who adopted him has become one of the most talked-about true stories of our time. But until now, Leigh Anne and Sean Tuohy have never told this astonishing tale in their own way and with their own words.

For Leigh Anne and Sean, it all begins with family. Leigh Anne, the daughter of a tough-as-nails U.S. Marshal, decided early on that her mission was to raise children who would become "cheerful givers". Sean, who grew up poor, believed that one day he could provide a home that would be "a place of miracles". Together, they raised two remarkable children—Collins and Sean Jr.—who shared their deep Christian faith and their commitment to making a difference. And then one day, Leigh Anne met a homeless African-American boy named Michael and decided that her family could be his. She and her husband taught Michael what this book teaches all of us: Everyone has a blind side, but a loving heart always sees a path toward true charity.

Michael Oher's improbable transformation could never have happened if Leigh Anne and Sean Tuohy had not opened their hearts to him. In this compelling, funny, and profoundly inspiring book, the Tuohys take us on an extraordinary journey of faith and love—and teach us unforgettable lessons about the power of giving.

What listeners say about In a Heartbeat

When I heard Leigh-Anne Tuohy speak in Toronto in August, she said that while the movie was truthful, it didn't tell the whole story. She was right. I now understand why she says that opening their home to Michael was a natural extention of how they were raised and who they are. Leigh-Anne is an excellent narrator, Her honesty and passion rings true. I've listened to this book 4 times so far and will continue to replay it often.

What a wonderful story of giving. Thank you to Sean and Leigh Anne for showing us how to give cheerfully.

Totally enjoyable!! This book gives added depth and understanding into a spectacular family and a miracle that changed their lives. I listened to the book twice and marked several sections that were particular favorites. I highly recommend listening and following Sean and Leigh Tuohy's example.

What did you love best about In a Heartbeat?

Their southern accents were lovely to listen to & added to the story.

My mother and I listened to this on some long drives. Easily can listen to as long as you have the time.

This is a personal account of the Tuohy family... told with their own voices. I found it a delightful addition and extension to the movie. Written to encourage others to become involved in making the world a better place by helping one person's needs at a time... it left me wanting to do so as well. Was a great Sunday afternoon read.

Finishs out The Blind Side

I loved The Blind Side and this book rounds it out.
Leigh Anne is a real character.

Loved every bit of this book. Makes me want to be a better mom and person.

An absolute must read if you're a giving person

Exceptional story told by The Tuohy family. Highly recommend it to everyone with a heart.

I really loved the movie and the book The Blindside but really appreciated her more detailed story. Great read, highly recommended!

Behind the Scenes of "The Blindside"

Hmmm. . how to put this: I have never heard a family of four talk so unabashedly about their Christian faith, their goodness, their philanthropy, their big hearts, their feathered nest, their upbringing, their talent, their ability to love, their interest in the well being of others, their need to share what they have, their ability to give, their philosophy of life, their relationships, etc. etc. etc. Cheerful giving it is. . . and the Tuohy's have cornered the market on it. Each chapter focuses on a different family member or different type of giving. Their story was "interesting" and to some will be quite compelling and inspiring. Narrated mostly by Leigh Anne Tuohy who does a nice job. Sean? Not so much.

Having watched the movie, The Blind Side, really enjoyed hearing more about the Tuohy family and their values