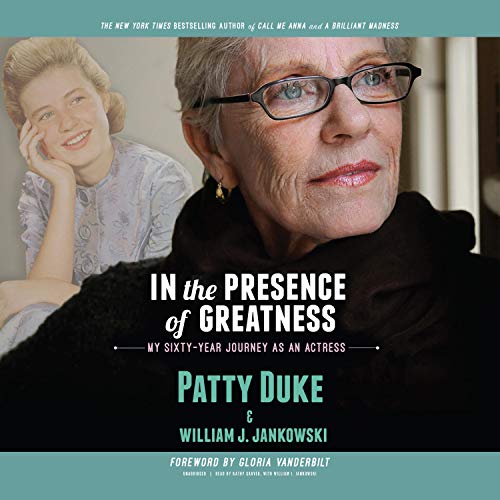 In the Presence of Greatness

Patty first gained national attention and praise playing Helen Keller in both the Broadway stage and film versions of The Miracle Worker. As identical cousins on The Patty Duke Show, her name became an American household word. Her later work in Valley of the Dolls, Me, Natalie, My Sweet Charlie, a later television remake of The Miracle Worker, and dozens of other productions established her as one of America’s leading actresses.

What listeners say about In the Presence of Greatness

A must listen for fans and those who love film and television. This is the final book by Oscar and Emmy winning actress and best selling author Patty Duke. She was working on this book with her long time assistant collaborator Bill Jankowski at the time of unexpected passing. This book is a master class in film and television history and the journey of one the greatest actress in the history of film and television. Over a career that lasted six decades Patty Duke became icon.

I’m Still Scratching My Head Over This One

Patty Duke was a hard act to follow, much less to imitate. I don’t know who chose this narrator, but the decision to give the job to Kathy Garver was unfortunate. I was so unnerved and agitated by the sound of Garver’s voice that I couldn’t force myself to listen to Anna’s commentary beyond the first few names in the long list of celebrities. I feel cheated, because I would like to know what she said about them. I’ll certainly buy the print copy. Could they possibly have found a voice more unlike Patty Duke? I’m still scratching my head over this one. Kathy Garver has proven her talent as an actress but her voice is too unlike the Patty we remember. I get the impression that this was a rush job, and rather than take their time to do it right, somebody used poor judgment. The importance of one’s voice to those who care cannot be exaggerated. We shouldn’t expect an exact impersonation, but neither should we settle for too much dissonance. On the positive side, I’m thankful for the book and it’s memorial to a lovable actress of great substance and courage.

Having been a huge Patty Duke fan and a lover of her book "Call Me Anna" this was extremely disappointing both to read and to listen to. It just felt like she needed the money so she wrote a book.. I became extremely bored with "I knew this famous person" and "I knew that famous person" and she had really liked to have worked with them or worked with them one more time. I'm sorry she died before the author was quite finished with her yet, but in the end it just wasn't well written and was poorly edited. To top it all off it was extremely poorly read. Sorry Anna, but this was not your finest work.