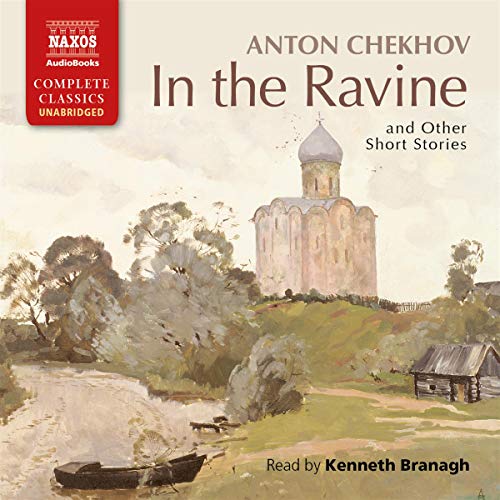 Talented actor Kenneth Branagh, most known for his film and television roles in various Shakespeare works, tears into these classic stories with relish. Weaving a tapestry of character voices, Branagh uses accents, pacing, enunciation, and seemingly boundless energy to bring these great Russian works to life. Listeners will find themselves chuckling at times and tearing up at others as Branagh dramatizes Chekhov's deceptively simple plots and characters. The prodigious Branagh is well matched to these literary explorations by the master of the short story.

Here are 11 short stories and one novella by Anton Chekhov, one of the finest masters of what is acknowledged as a difficult genre. There is the richly comic "Oh! The Public" about a hassled ticket inspector, a wry look at morals and manners in "The Chorus Girl", and the melancholic tale of a cab driver in "Misery".

Perhaps the finest of all is the novella "In The Ravine", a minutely observed look at life in a village through the eyes of one family. All the characters come to life with their foibles, their strengths, and their hopes. Kenneth Branagh uses his natural talent for characterisation to bring this village to life.

"If you want an outstanding reading, in which the narrator's voice brilliantly conveys the speaker's class and the intricate relationships between characters during conversations, you can do no better than to listen to Kenneth Branagh. This great actor mesmerizes as he gasps, chuckles, stutters, and declaims. A must listen." (AudioFile)

What listeners say about In the Ravine and Other Stories

In the Ravine and Other Stories is a varied collection of eleven short stories and one novella by Anton Chekov. Ranging from 1883 to 1900, this collection demonstrates Chekov's perfect prose, sly humor, understated pathos, cynical insights, medical perceptions, and impressive ability to get into the heads of a variety of people, male and female, old and young, elite and peasant. Each story features a different kind of protagonist, a different point of view, a different mood. Together they offer quite a slice of late 19th century Russian culture (icons, peasants, bribes, alcohol, passions, roubles, etc.) and human behavior (greed, pride, cruelty, love, charity, compassion, etc.). Some of the stories end with an almost provocative abruptness. Some are less interesting than others. Some are devastating. The collection is worth reading.

Here is a description of the stories.

Oh! the Public (1885)
A comical story about the problems that ensue when a train ticket collector decides to cut down on drinking and do his job honestly, heartily, and conscientiously.

The Chorus Girl (1886)
An appalling story about the awful treatment a chorus girl suffers when the wife of one of her lovers pays a call.

The Trousseau (1883)
A sad, quiet story about an odd mother and daughter who seem to spend all their days making clothes for the daughter's illusory marriage trousseau.
"People never prize what they have always had in abundance."

A Story without a Title (1888)
A cynical story about what happens when the father superior of a monastery tells his monks about the sinful behavior he experienced in town.

Children (1886)
A funny and finally quietly touching story about a group of children who enjoy playing cards for money for different motives that reveal how children are really only small and inexperienced adults.

Misery (1886)
An intensely sad story about an old sledge driver yearning to talk about the death of his son to someone, anyone, who'll listen: "If Iona's heart were to burst and his misery to flow out, it would flood the whole world, it seems, but yet it is not seen. It has found a hiding-place in such an insignificant shell that one would not have found it with a candle by daylight. . . ."

Fat and Thin (1883)
What happens when two former best friend schoolmates meet and one is more successful than the other.

The Beggar (1887)
An ironic and interesting story about charity and change.

Hush! (1886)
A 4th-rate writer likes to play the martyr at home, waking up his wife to tell her to keep things quiet while he writes, making expressions of "injured innocence," and finally falling into "sacred" sleep: "tyrannizing and domineering over the little anthill that fate has put in his power are the honey and the salt of his existence."

The Orator (1886)
A joke story about a man who makes an overblown, insincerely compassionate funeral oration gaffe.

An Actor's End (1886)
For me, the least interesting story. It's about an old actor with a strong body who, when arguing with his theater troupe manager, feels something snap inside him and wants to return to his hometown.

In the Ravine (1900)
The novella "In the Ravine" depicts life in a boring rural village through the lens of a leading family. Because something unbearably horrible happens without redress or justice, the story is painful. Does it end with redemption? "We can't know everything, how and wherefore." But "He who works, he who is patient is the superior."

About the audiobook, Kenneth Branagh's reading is excellent. He doesn't assume a Russian accent (luckily), but instead uses different British accents to express different classes, and reads all the words of Constance Garnett's classic translation just right, with perfect pauses and emphases and emotions. He reads female voices naturally, and at one point does a fine angry frog and hoarse cuckoo. Introducing and ending each story and each chapter of the novella is fine classical music, particularly piano.

Though The Kiss and the Duel and Other Stories is a stronger Chekov collection, anyone interested in crystalline stories, Mother Russia, and the human heart should like In the Ravine and Other Stories.

My god, I knew Chekhov was a fantastic playwright (I particularly love The Cherry Orchard). But I hadn't read his short stories. The reader, Branagh, is just perfect -- the perfect voice for these stories. They are delightful, very interesting and enjoyable tales. You can just listen to one after another, or take them one little story at a time. Any way you do it, you're going to have an exceedingly enjoyable listening experience.

Title story, In the Ravine, a masterpiece

The title story is the only thing in this collection that pulls it to your attention. Too many of the other stories are early work, sketchy and undeveloped, a master learning his craft, and interesting only in that light, although the reader makes the most of them. But In the Ravine is one of Chekhov's greatest, grimmest, and most serenely cruel stories: a devastating and unforgettable piece.

Some of these stories are very short, but all create vivid scenes of turn of the century Russia.

Would you consider the audio edition of In the Ravine and Other Stories to be better than the print version?

Yes so much better than print, the emotion comes through the narration

What other book might you compare In the Ravine and Other Stories to, and why?

Which character – as performed by Kenneth Branagh – was your favourite?

Great writing, & narration meet the emotion pours out. A gulp in the throat and water in the eye, not always recommended when you listen on a long drive to work, but so rewarding.

Made me purchase more Kenneth Branagh narration. I can highly recommend 'heart of darkness'

Classic Chekhov short stories rounded off by the novella The Ravine. A real treat for Chekhov fans.